Answer at the bottom.

In 2009 and 2010, Adam Wainwright finished in the top three in Cy Young voting twice. He struck out 8.3 batters per nine, and he walked 2.4. He allowed 32 home runs. Wainwright’s average fastball was 91 mph; he threw a hard slider in the mid 80s, and the occasional change, but the pitch he leaned on was a curveball in the mid-70s. He’d get whiffs on that curveball 17 percent of the time, and when he was ahead 0-2, he’d throw it six out of 10 pitches. He’s tall, he weighs 235 pounds, he looks like this: 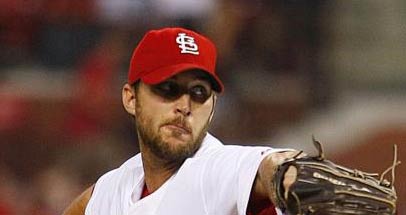 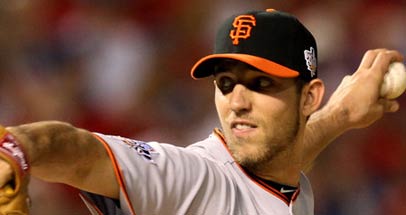 is what Madison Bumgarner looks like. He weighs 230 pounds, and he’s tall. His favorite pitch is a hard slider in the mid-80s; on a full count, there's a better than 50 percent chance that he’ll throw it. He also throws an occasional change, a curveball in the mid-70s, and an average fastball of 91 mph. Over the past two years, he has allowed 35 home runs. He has walked 2.3 batters per nine and struck out 8.3.

Wainwright is right-handed and Bumgarner is left-handed, but Wainwright is what the Giants should hope Bumgarner grows up to be. In one sense, he’s on a darned good path: Bumgarner is only 23, and by the time Wainwright was 23 he had thrown just two major-league innings. Pitching growth isn’t predictable and it isn’t linear, so we might be seeing the best Bumgarner ever has in that arm of his. But what he has is tantalizingly close to Wainwright’s best.

But here we are, going into Game Five, and Bumgarner has lost his spot in the rotation to Barry Zito. His velocity is down, his mechanics are off, he has thrown two lousy postseason starts and hasn’t had an unqualified good start in his last nine tries. Instead of turning to nearly-Wainwright in an elimination game, the Giants will turn to Zito.

Wainwright, meanwhile, put the Giants into the spot that they’re in. Some 73 percent of his pitchers were strikes (compared to Tim Lincecum’s 56 percent) and he allowed one run, walked nobody and struck out five in seven innings. The lone blemish was a home run to Hunter Pence, but it was a solo shot and probably everybody was happy to see a nice guy like Pence get to be happy for a few minutes. It’s been a rough month.

I know it's an optical illusion, but even frame by frame the break is disorienting, as it goes from certainly up and in: 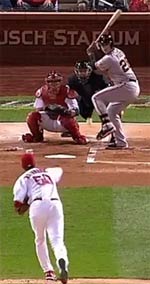 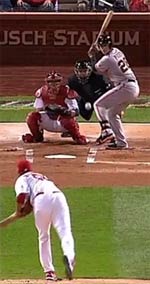 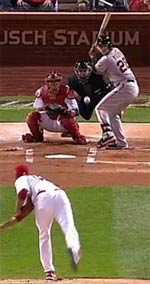 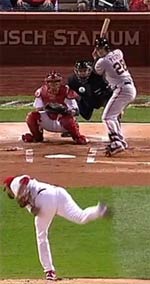 to, unpredictably but also predictably, low and outside: 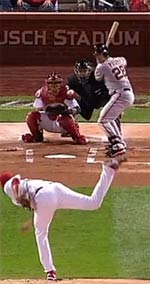 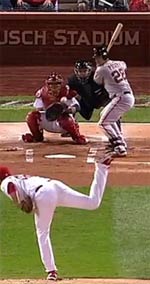 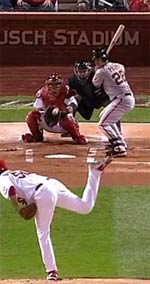 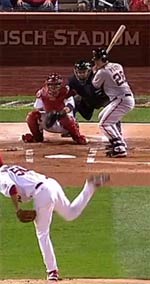 By my favorite curve was actually captured by the slightly off-center behind-the-plate camera.

This isn't an angle that they show very often, but it's the angle that gave me one of my favorite pitch-porn GIFs ever

and it's an angle I wish we'd see a lot more often on replays at least. By the way. Go to the Wainwright pitch. What's Jon Jay doing? Just trying to get a jump based on Pence's body language/the pitch?

Tim Lincecum was pretty bad, which is surprising if you accepted the pitching-from-the-stretch narrative entering the game, but not as surprising if you watched him struggle to throw strikes in his third relief appearance. Against the Cardinals, he struggled to throw strikes, but more than anything he struggled to throw a breaking ball. This is what PITCHf/x recorded for Lincecum, compared to the regular season and his relief appearances (all figures are percentages):

There are two possibilities here. One is that Lincecum didn't have a breaking pitch that he was comfortable with. More troubling is the possibility that he actually was throwing the slider, but it was so flat that PITCHf/x was recording it as a changeup. For instance, this pitch:

is called a changeup, but Tim McCarver thought it was a slider that backed up. Here are some close-ups: 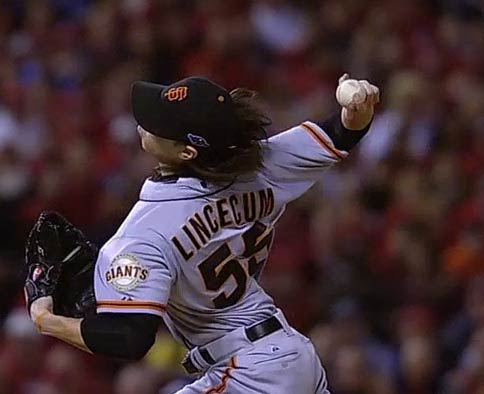 Never miss a chance to include some Doug Thorburn geniusness:

He appears to be supinating the pitch in the second and third GIFs, and he isn't forking the ball. What PITCH/x labels a changeup is Timmy's off-speed pitch, but he throws it with more of a splitter/forkball grip and doesn't use pre-set pronation.

Based on the first GIF, it looks like the pitch broke too late to get full tilt before Holliday made contact, and the lack of downward movement is probably why PITCHf/x interpreted it as a change. It also looks like he got on top of the pitch, which minimizes the lateral movement. Add it up, and a pitch thrown with slider velo but less downward and sideways break, and PITCHf/x automatically dumps it into the changeup bin since he throws both pitches at the same speed.

One way or another: lousy.

Overall, Lincecum has now thrown 195 pitches this postseason, all from the stretch. After Thursday, 122 of them were for strikes: 62.5 percent. That's up from 61 percent in the regular season, right around where he was in his pretty-good 2011 season (62 percent), and down a bit from when he was elite (64 percent from 2008 to 2010). It's hard to isolate the effect of the stretch from the fact that he was pitching in shorter relief outings, and it's hard to isolate either from the obviously small sample size (and relatively small margins of difference).

Anyway, just a whole bunch of unconnected dots. It's just probably optimistic to think that pitching from the stretch exclusively is going to be what fixes Lincecum.

You need to be logged in to comment. Login or Subscribe
sam19041
I am partial to "Wain's World, Excellent!" personally. Nice work on the puns today, Sam. I thought MLB's verion was the weakest of the bunch.
Reply to sam19041
frampton
Not to get all pedantic, but the last headline should be "berth", not "birth", right?
Reply to frampton
lyricalkiller
The misspelling was intentional


(swear!)
Reply to lyricalkiller
redspid
2 b answers in a row, but that can be purely random - like 2 Kozma hits in a row.
Reply to redspid