All of these are have an equal amount of carpenter puns! (Answer at the bottom)

In August, Chris Young threw 5 2/3 innings for the Mets, allowed eight hits and four walks, and didn't allow a run. In September, Ricky Romero pitched six innings for the Blue Jays, allowed seven hits and walked five, and allowed one run. Throughout the rest of the year, 146 pitchers matched the first parts of those pitching lines—between five and six innings and exactly 12 baserunners allowed—but couldn't match the second part. They all allowed two runs or more.

On Wednesday, Lohse joined Young and Romero, going 5 2/3, walking five, allowing seven hits, but giving up just one run. He is also just the fourth starting pitcher to walk at least five Giants in a game this year; the other three lost. Lohse won.

So, as you can tell, if all you knew about Lohse was how many batters he retired, how many he didn't, and how many runs (three) that the Cardinals scored, you'd be on pretty safe ground betting he lost: three quarters of the similar pitchers allowed at least four runs, and most of the remainder gave up three. Yet Lohse walked off to a big ovation. I think I saw him wink?

"Lohse personified the Cardinals in Game Three," said the hometown paper. "He walked that fine line that separates winners and losers in postseason baseball. He could have gone either way. Show weakness and capitulate. Or stand your ground and fend off the Giants on a day when your pitches had more fizzle than sizzle. Lohse dug in. He fought. He won."

"He's been close to flawless," Jon Heyman wrote this week about Lohse, a pending free agent. "A couple execs scoffed at the idea he could repeat C.J. Wilson's $77.5 million, five-year deal (one said $40 million for three is more like it). But the reality is, Wilson was poor in the postseason, and Lohse is excellent (so far)." That's still true after Wednesday's game but maybe not in a way a GM will be buying.

At some point back there in a podcast or an article or a tweet, I mentioned that Alex Rodriguez, benched by the Yankees, would have had the second-best OPS+ in the opposing team's lineup. (The Yankees were playing the Orioles.) Rodriguez stays benched, but thanks (wrong word?) to Carlos Beltran's injury Wednesday, Matt Carpenter was, for one game, not. And here's the thing about Carpenter:

He would have had the second-best OPS+ in the Yankees' most recent lineup.

Beltran is reportedly going to be ready for Thursday's game. Unless Carpenter's home run bought him more playing time, he'll be on the bench, just as he has been for every other game the Cardinals have played this postseason. [Update: Beltran still questionable.]

You are a smart and informed person, so you know that Carlos Beltran was a Rookie of the Year, the most exciting Royal since George Brett, perhaps the best high-percentage basestealer ever, the guy who hit eight home runs in the 2004 postseason, the guy who was a five-time All-Star as a Met, the Gold Glover, the MVP candidate, and probably a deserving Hall of Famer. But in the world, the larger world, the world of people who comment on ESPN articles and YouTube videos, Carlos Beltran is the guy who took a called strike three once. People hate—they just hate—called strike threes.

He always looks super mad. He's not getting fooled by pitches. He's just taking close pitches. Does he have a beef? Here are those five calls.

Called strikeouts no. 1 and 2: October 9

Belt postures: in which Belt holds his bat suggestively while Gerry Davis does aggressive wedding-reception dance moves, and in which the parasite in Brandon Belt's stomach gets progressively worse: 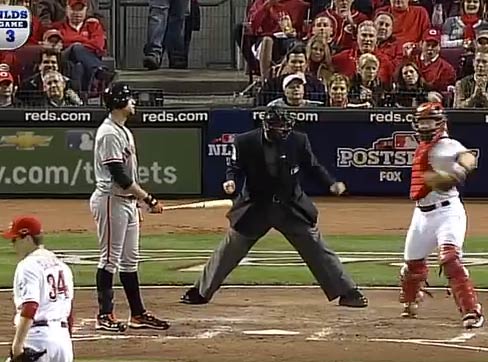 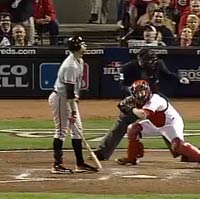 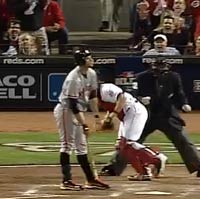 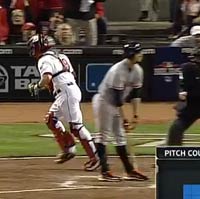 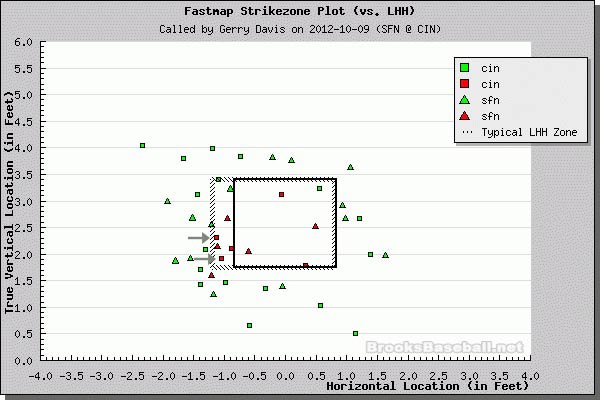 Neither is the most low or the most outside or even the most low and outside, but both are very near the edge of what left-handers have to protect. Those are pitches that make pitchers wealthy.

Belt posture: in which Belt can't believe it, this dude over here won't even turn around and look at me while he's calling me out, but whatever, I can stand here and wait all day for you to look at me, pal. 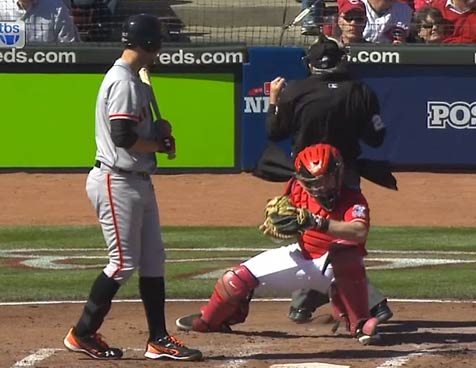 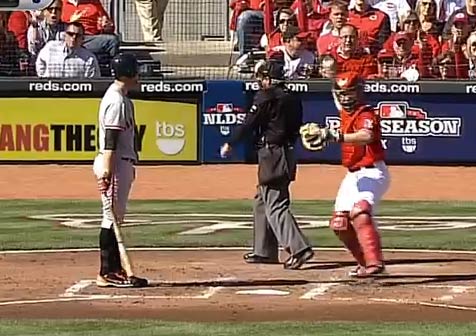 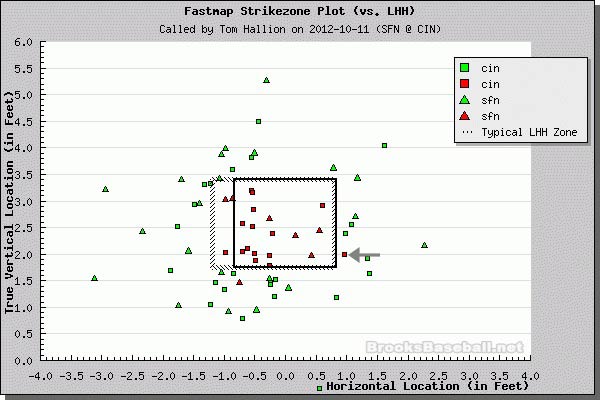 Belt posture: in which a large number of Giants fans seem happy, Chris Guccione prepares for fisticuffs like a drunken Irishman, and Belt becomes very disappointed because he expected more from Guccione and thought he'd be cool, man. 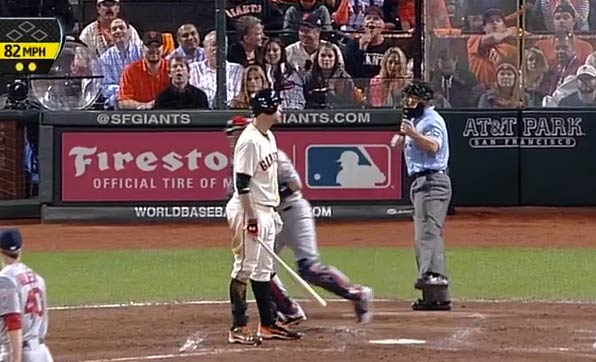 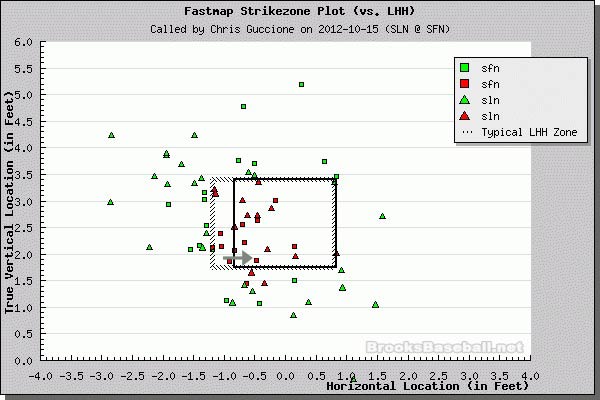 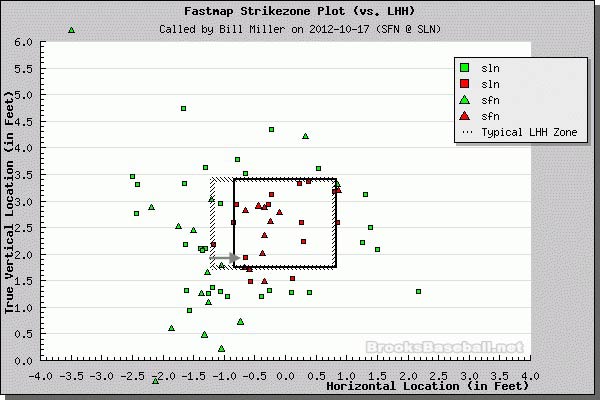 This one is pretty clearly in over the plate and probably high enough even for the 6' 5" Belt. Four of the pitches he has been caught on have been, basically, in the same vertical location, though some caught more of the plate than others. If these games are representative of the rest of Belt's season, it might just be something that Belt is going to have to accept. I like patient Belt. I want to keep seeing patient Belt. But the baseball field is a lousy place to try to make a symbolic point.

By my math, the team that takes a 2-1 lead in a seven-game series has a 69 percent chance of winning the thing. 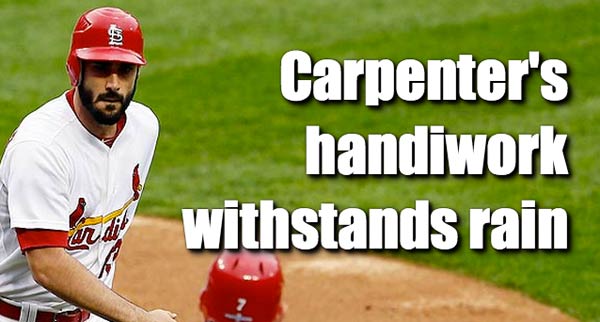 You need to be logged in to comment. Login or Subscribe
nicklocarno
As a drunken Irishman, I resent the racially-insensitive generalization that we all fight like the Notre Dame logo.
Reply to nicklocarno
sam19041
As an I curable punster, I LOVED the faux MLB.com headlines. Nice work!
Reply to sam19041
rweiler
MLB ought to really make some effort to get all umpires to call a rule book strike zone. That is their job after all.
Reply to rweiler
sliver
Belt has successfully worked counts with a superior batting eye all season. He's also been scuffling recently and overall hasn't yet become the hitter many folks thought he would be. But it's not Belt's style to Willie Wilson his AB's, and though opening up his zone seems like the obvious plan of attack in the situation, Belt's approach has mostly worked for him. I still like his chances to be at least an average offensive firstbaseman with a plus glove.
With Lincecum pitching today, Sanchez probably starts, Posey moves to first and no doubt Belt will take this analysis under advisement.
The Reds are still going to win.
Reply to sliver
NYYanks826
Really disappointed about the headline. I thought choice B was genius.
Reply to NYYanks826
redspid
I knew it wouldn't be C again, and thought B was great also.
Reply to redspid
lyricalkiller
The order is generated randomly I swear!
Reply to lyricalkiller