Six-to-nothing leads have had a way of evaporating this postseason, but the Cardinals—despite a four-run Giants rally in the bottom of the fourth inning—held on to win Game One, 6-4. Will San Francisco fall behind, 2-0, for the second consecutive series, or will the Giants square things up before heading to St. Louis? To answer those questions, here are the PECOTA odds and projected starting lineups for Game Two:

Unlike Yankees skipper Joe Girardi, who has tinkered with his lineup on a daily basis, Mike Matheny and Bruce Bochy have it easy. Apart from rotating their pitchers, the two skippers have essentially trotted out the same order since the playoffs began. And barring an unforeseeable scratch, they will do so again tonight.

PECOTA picked the Giants as nearly two-to-one favorites in the opener, but as I noted in yesterday’s preview, it failed to fully account for Madison Bumgarner’s recent struggles, which reared their ugly heads again on Sunday night, digging the home team a hole that ultimately proved insurmountable. The model is better equipped to forecast today’s contest, where both starters are relatively known commodities, and it views Game Two as a crapshoot, giving the Cardinals a razor-thin advantage in their bid to travel home already halfway to the pennant.

Monday’s probables, Carpenter and Vogelsong, make for an intriguing tilt, largely because, just weeks ago, neither was expected to be in his team’s playoff rotation. Carpenter’s 2012 campaign was purportedly over when he underwent shoulder surgery in mid-July. Vogelsong logged a 6.32 ERA in August and a 6.46 ERA in September, leading many to believe that he had fallen behind Tim Lincecum and Barry Zito on the postseason depth chart and would work primarily out of the bullpen. Instead, both contributed to their teams’ victories in the third games of their respective Division Series.

Pitching at Great American Ball Park with the Giants’ season on the line, Vogelsong held the Reds to one run in five innings of work, enabling his then-maligned offense to bide its time against a razor-sharp Homer Bailey. Here’s his PITCHf/x chart from Brooks Baseball:

The 35-year-old righty needed 95 pitches to record 15 outs, and he threw only 55 of them for strikes, but he did his job by limiting mistakes and avoiding the wrath of an unforgiving yard. Cincinnati collected three hits (all singles) and three walks, but pushed across only one run, because Vogelsong refused to give in when behind in the count, knowing that a crooked number could doom San Francisco’s season. Bochy’s bullpen, though weaker than in past years, is still deep enough to withstand a four- or five-inning workload, so the same recipe may serve Vogelsong well again tonight.

On the other side, Carpenter’s stuff has not entirely returned and probably won’t until 2013, since he’s still only three months removed from nontrivial surgery. But the 37-year-old kept the Nationals at bay on Oct. 10 and has not been charged with more than three runs in any of his four starts since he joined the rotation on Sept. 21.

When he is at full strength, Carpenter’s sinker typically averages 93-94 mph, rather than sitting at 91 and topping out in that range, as it did on Oct. 10. His curveball has also lost nearly two inches of vertical break, compared to its 2011 movement of 9.46 inches, a decrease that may have contributed to his lackluster whiff rate—just one in 18 tries—in Game Three of the Division Series. But Carpenter scattered seven hits, only one (an Ian Desmond double) of which went for extra bases, and executed his pitches in high-leverage spots, preventing Washington from eating into a 4-0 St. Louis lead.

Moreover, unlike Vogelsong, Carpenter carries a wealth of postseason experience, having played a key role in the Cardinals’ World Series championship a year ago. Considering that Carpenter has outdueled Roy Halladay in a 1-0 game at Citizens Bank Park with his back against the wall, a Game Two assignment in pitcher-friendly AT&T Park with a 1-0 series edge should scarcely knot his stomach.

Though most of the Giants’ starters have seen Carpenter before, none of them can claim as extensive a head-to-head résumé as the former Astro, Pence, who saw plenty of the veteran northpaw when they were rivals in the National League Central. Carpenter prevailed in most of those encounters—holding Pence to a 5-for-27 line with one triple, one homer, one walk, and seven strikeouts—and Pence, then playing right field for the Phillies, went 1-for-5 with a single and the aforementioned free pass when they locked horns in the Division Series last year.

The 29-year-old Pence, who emerged as the Giants’ clubhouse leader when they faced elimination against the Reds, must now find a way to contribute on the field. He is a pivotal component of the offense, because he bats immediately behind the team’s top threats and directly in front of the left-handed hitting Belt, Blanco, and Crawford. Those bottom-of-the-order lefties don’t offer much power, but they could nonetheless pose a problem for Carpenter—who has coughed up a .385/.467/.467 triple-slash line to lefties in limited action this year—by prolonging rallies started by Sandoval, Posey, and company. That threat would be mitigated if Pence, who is 5-for-24 with no extra-base hits or walks in the postseason, stays dormant in the five-slot, which is why he gets the nod in the Matchup of the Game. 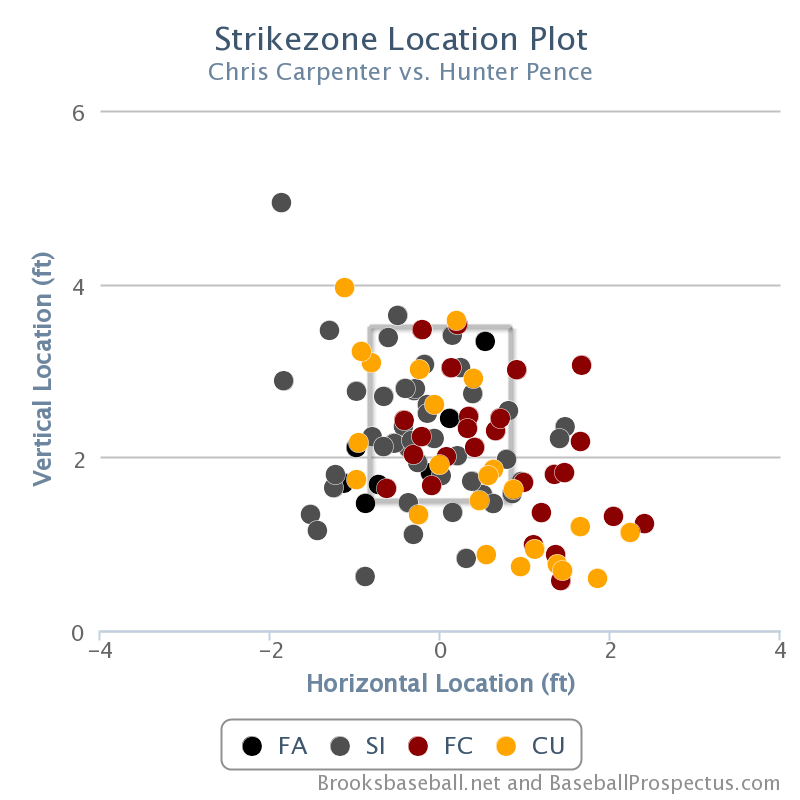 The strike-zone plot above illustrates how Carpenter has taken advantage of Pence’s hack-happy approach with breaking balls and cutters in the dirt. Both the triple and home run Pence hit off of Carpenter came on belt-high cutters; he has had virtually no success on pitches in the lower third of the strike zone, and has shown no ability to lay off of 58-foot curveballs in two-strike counts.

If Carpenter keeps Pence mired in his post-season slump, he should be able to thwart the Giants’ most threatening rallies and give the Cardinals’ more-powerful offense ample opportunities to do damage against Vogelsong. But if Pence wakes up and begins to back up his pre-game speeches, he could provide the fire the Giants need to even the series.

You need to be logged in to comment. Login or Subscribe
waynemc7
I really enjoy reading these articles. The data is great and the arguments sound. However it does look strange that PECOTA is 0-4 in CS games thus far.
Reply to waynemc7