A few innings after Raul Ibanez solidified his True Yankee™ status with yet another ninth-inning, game-tying home run, seemingly setting the stage for an inevitable extra-innings win, the Yankees lost Game One. They also lost a leader and a pretty good player, leaving them looking much more vulnerable than they did a day ago. Here are three things to think about before Game Two gets underway.

Detroit’s Defense
As Sam Miller pointed out in his series preview on Saturday, the Yankees have the edge over Detroit on defense—not because the Yankees’ fielders are especially good, but because the Tigers’ are particularly terrible. But even the Tigers aren’t hopeless all over the field, and in any given game, they can look like the better defensive team. The Tigers brought their gloves to Game One, and as a result, they kept the Bronx Bombers off the board for the first eight innings.

The Yankees loaded the bases in the first, second, and sixth innings with nothing to show for it. In the sixth, Doug Fister escaped his own jam, striking out Alex Rodriguez, Curtis Granderson, and Russell Martin. But in the first and second, Fister had help.

After issuing walks to Derek Jeter, Mark Teixeira, and Raul Ibanez, Fister faced A-Rod with two outs and the bases full in the first. A-Rod hit a hard grounder in the hole between second and third, and Jhonny Peralta turned it into an out.

Ibanez complained about the call at second, but the replay confirmed that it was correct. 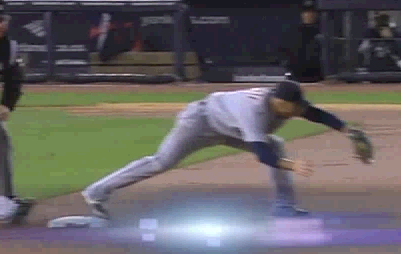 In the second, consecutive singles by Russell Martin, Derek Jeter, and Ichiro Suzuki loaded the bases for Robinson Cano. Cano hit the ball hard to Peralta, who barehanded it and threw him out with an assist from the pitcher’s mound.

This time, it was Cano’s turn to complain. And this time, the replay showed he was right. 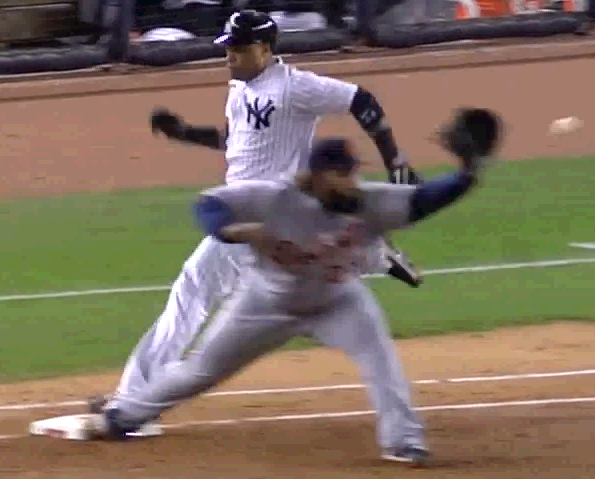 The Tigers made one more fine play in the field, when Austin Jackson—not just Detroit’s finest fielder, but one of the best outfielders in baseball—ranged all the way to the wall in right-center to track down a ball hit by Eric Chavez.

Those plays saved at least a few runs for Fister, but the Yankees didn’t provide their pitchers with the same sort of defensive support. Two of the game’s pivotal plays came on balls hit to right field by Delmon Young. Nick Swisher couldn’t get to the first:

And he lost the second in the lights, which allowed the winning run to score.

Defense wasn’t supposed to be Detroit’s strength, and over a larger sample—a sample as large as the regular season, let’s say—it wouldn’t be. That doesn't mean it can't be for a game or two at a time.

Detroit’s Bullpen
We don’t know what Justin Verlander thought when Ibanez tied the game with his playoff-record third home run hit in the ninth inning or later, but his expression gave us a pretty clear indication.

We have an even clearer indication of what Octavio Dotel thought, since he told us after the game: “Oh, shit, Ibanez again.”

“Oh, shit, Valverde again” would have made just as much sense. Three days after blowing a save opportunity and taking the loss in Game Four against Oakland, Valverde endured another meltdown, giving up a single to Russell Martin, a home run to Ichiro, a walk to Mark Teixeira, and the game-tying blast by Ibanez.

If the Yankees had found a way to tack on another run after Ibanez hit his homer, Detroit’s bullpen blow-up would have been the big story. It was big enough as it was. After the game, reporters peppered Valverde with questions.

Do you need a break from the closer’s role?

Is it in your head?

Valverde says he’s healthy, and he says he wants the ball. Based on Jim Leyland’s post-game comments, though, he may have seen his last save situation this season. Leyland said he had Dotel up with Valverde in “because there were things [he] didn’t really like,” and while he hadn’t made any decisions as of last night, he planned to “get together as a coaching staff and talk about it” in order to come to a decision before Game Two. That decision could involve a role change for Dotel, who pitched 1 1/3 scoreless in relief of Valverde and says he’s “ready for anything.”

Valverde has been shaky all season, particularly against lefties, whom he’s walked almost as often as he’s struck out. Letting him face Ichiro, Cano, Teixeira, and Ibanez in order almost came back to bite Leyland, and he’s likely to learn from that mistake.

Life After Derek
The oddest thing about the injury was that it occurred on such a routine-looking play, with no obvious impetus. One second, Jeter was drifting up the middle, and the next, he was grimacing on the ground. My initial inclination was to blame the tumble on Jeter’s infamous inability to range to his left, but that thought didn’t last long. As Joe Girardi put it when he retraced his thought process during the post-game presser, “Oh boy, if he is not getting up, something’s wrong.” In this case, that something was an ankle fracture that should take about three months to heal. It won’t jeopardize Jeter's career, but it will hurt his team's chances of advancing to the next round.

Jeter’s foot has been banged up by foul balls for some time now, and while he’s occasionally been caught limping, he’s been in the lineup nonetheless. To hear Girardi tell it, Jeter seemed less likely than the Black Knight to let a leg injury stop him. If you’d asked me before the game what it would take to end his season, I would’ve guessed either elimination from the ALCS or a full-on collision with Prince Fielder. Instead, it was a groundball off the bat of Peralta, a reminder that no move a player makes is ever entirely without risk.

Today, the Yankees will play their first postseason game without Jeter since the 1995 ALDS. As Daniel Rathman detailed, the Yankees’ projected probability of winning is only 1.1 percentage points lower without Jeter than it would be with him. That doesn’t seem like much, but it makes some sense: Jeter was worth 2.5 WARP in 159 games this season. Assuming that’s his true talent, and that Nix and Nunez are replacement-level players, we wouldn’t necessarily expect Jeter’s absence to change the outcome of any one game or best-of-seven series (which isn’t to say that it couldn’t, in a particular case).

Since it’s Jeter, of course, the consensus seems to be that the true impact of the injury is something cold, hard stats can’t capture. Who knows? Maybe the Yankees will be a little less confident without Jeter, and maybe that will affect their play on the field. Or maybe they’ll climb up on their clubhouse stools, exclaim “O Captain! My Captain!”, and be so inspired by Jeter’s steady gaze that they’ll sweep the rest of the series. More likely, they’ll be a bit worse than they would’ve been otherwise. Here’s what we do know: the last time Jeter was out for an extended period was last season, when he missed 18 games with a calf strain. And in those 18 games, the Yankees went 14-4. We also know that the Yankees lost Mariano Rivera at the end of April, which was portrayed as a similar blow. They won at a .591 rate with Rivera and went on to win at a .586 clip without him.

In case you were wondering, we won’t see Alex Rodriguez fill in for Jeter. A-Rod won a Glove Glove in his last full season at short, but that was almost a decade ago. He’s played eight innings in five games there for the Yankees, and none since 2005. As Girardi said, “It’s just been too long.”

The scariest thing for the Yankees at the start of this series was the knowledge that Justin Verlander would start two of seven possible games. Now they’ve dropped the first game, and they know Verlander can start two of the next six. That means that if the Yankees don’t win one of the games against Verlander, they’ll have to win all four of the remaining games against Detroit's other starters, no slouches themselves. And they’ll have to do it without Derek Jeter, and with Hiroki Kuroda starting Game Two on three days’ rest, a big-league first for him. A 1-0 lead can’t qualify as “commanding,” but the Tigers’ position is considerably stronger than it was when the series started.

You need to be logged in to comment. Login or Subscribe
pctec100
Bummer about Jeter. You always hate to see any player get injured...unless it's a really funny and not very serious injury...but to lose one of the games great stars during the post-season is not only a loss for his team but a loss for baseball overall.
Reply to pctec100
anderson721
Was it just me or was Pettitte getting calls on borderline pitches that Fister was not?
Reply to anderson721
juiced
BP has ranked the AL as the superior league all year long, as reflected in it's Daily Hit Lists. I'll say it now though; the NL will win the Series. Both AL teams have serious flaws, and they were exposed last night.
Reply to juiced
DetroitDale
I agree bummer about Jeter. I wanted to win but not this way.

I remember thinking in the 6th inning as it was happening that whoever won the two out at bat between Russell Martin & Doug Foster would win the game. I was right for the wrong reason.

I thought on replay Cano was safe in the second inning . I remember growing up my wise uncle once told me that bad calls even out eventually. I think this makes up for Joyce messing up armando gallaraga's perfect game.

I rag on leyland for his qustionable tactics with early bunts, quick hooks, and team collapses so to be fair I need to give him props when the team shows heart and comes back after papa grande's tater fest ( fyi papa grande means big potato not big daddy). And for going with a new closer when the old one shows he's lost it.

Today's game is a clear must win for the yanks. If they lose they have to face a rested verlander without their short fences and without their captain and the next day max scherzer grabs abroom
Reply to DetroitDale
Asinwreck
The blurry shot of Prince Fielder at 1B makes him look like the Loch Ness Monster.
Reply to Asinwreck
bornyank1
It made me think of Mitch Hedberg's joke about Bigfoot.
Reply to bornyank1
surfdent48
Fister was sure one very lucky dude
Reply to surfdent48