Game Three was, in its most visible respects, diametrically opposed to the way Game Two went: Ryan Cook, Sean Doolittle, and Grant Balfour held a close game late rather than blowing it, and Coco Crisp made a miraculous catch, committing grand larceny on a Prince Fielder homer rather than dropping a pop-up. The result was a 2-0 win, another day of life for the A's, and a second home playoff game for the fans.

PECOTA likes this matchup for the A's even better than it did in Game Three when it had Oakland at 58.1 percent to win. (We ran the simulations again with Derek Norris at catcher instead of George Kottaras, and PECOTA came out 0.3 percent higher for the A's. Call me, Mr. Melvin, and let me know what you think.)

Scherzer had a breakout year in certain respects; while he had a better ERA in 2010 and threw more innings in each of the last two years, he added almost 50 percent to his previous career high in WARP, racking up 3.8 wins on the strength of a tremendous 29.4 percent strikeout rate. (The next-highest qualifying pitcher was Yu Darvish at 27.1; following those two are three pitchers just above 25 percent: Clayton Kershaw, Gio Gonzalez, and Justin Verlander. The gap from first to fifth is remarkable, especially when you read the names of the players involved.) His walk rate was also better than average, and he gave up a reasonable number of homers, especially seeing as how he's a fly ball pitcher.

So why is Scherzer not blowing the competition away for the Cy Young? Our old friend BABIP. I don't mean that in the sense that you often see it meant, however. I'm not explaining away Scherzer's hit-rate as luck and claiming that the A's had better watch out lest they be unceremoniously dumped from the playoffs via the no-hitter. No, check out Scherzer's BABIPs in his four full seasons in the big leagues:

It is worth noting Detroit's horrendous defense this season (27th in defensive efficiency and park-adjusted defensive efficiency), but Scherzer's two previous Detroit teams and his Arizona squad in 2009 were merely below average, so the difficulties with keeping hits from falling can't be placed entirely at the plodding feet of Miguel Cabrera.

In any case, if there is any team that will express a willingness to whiff, it's the record-setting wind-makers in green and gold, and if there's any park that forgives the occasional fly ball on a 95 mile per hour heater, it's the O.Co Coliseum (hereafter, "the OCoCo," which is precisely what all of baseball fandom, minus Tigers fans, yelled when the A's center fielder stole a homer from Prince Fielder in Game Three).

On the other side, A.J. Griffin does not exactly have Scherzer's track record. He's a big, 24-year-old righty who began 2011 in Class-A. He is the first person from his draft round (13th, 2010) to make the majors. Nobody in the 12th, 11th, or 10th rounds have made it either. Josh Spence, a Padres pitcher out of Arizona State and a ninth-round pick, has made it. That's the lowest pick above Griffin. Exactly three players drafted behind Griffin have broken through (two of them from the 30th round, oddly).

Anyway, that's trivia. For those not familiar with his game (since, again, he's tossed all of 82 1/3 innings in the big leagues), Griffin is a low-velocity (90-mph average four-seamer) hurler with a slow curve (sub-70-mph) who tends to work up in the zone: 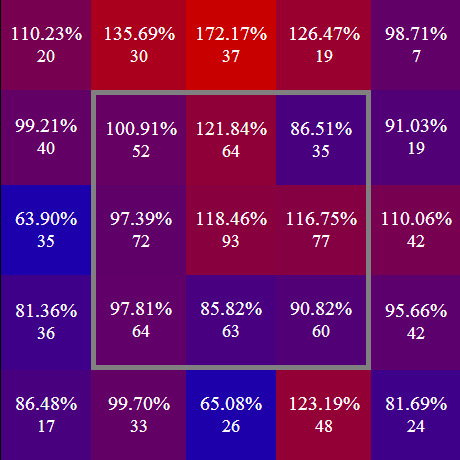 (That is a normalized plot from the catcher's perspective, so the colors represent where Griffin has put his pitches this year compared to other right-handers.)

Griffin's curve was the second-slowest among starters with at least 200 curves thrown this year, behind only Randy Wolf, which allowed him to keep batters off-balance enough to strike out 64 of them for a just-below-league-average rate of 19.1 percent. Combine that solid rate with how few walks he allows and you can see the trade-off: low-velocity offerings up in the zone result in a fair number of souvenir baseballs for the bleacher bums, especially considering Oakland is his home park, but if he hasn't put anybody on base for free, there's less chance that it really hurts him.

Besides the park, Griffin probably benefits from being a fly ball pitcher rather than a groundballer given the A's defense; the current infield configuration features not one, not two, but three recent conversion projects: Josh Donaldson (catcher to third), Cliff Pennington (shortstop to second), and Brandon Moss (outfield to first). Stephen Drew is the steady presence defensively, and even he gives A's fans palpitations with his throwing. The outfield, by contrast, features Josh Reddick's athletic, strong-armed play in right, Yoenis Cespedes's athletic, strong-armed play in left, and Coco Crisp's athletic, str… uh, well, athletic play in center. If you want to send fly balls to die, you send them to the Oakland outfield.

Just so we're not spending all our time talking about starting pitching: Prince Fielder hasn't hit in the series. Of course, the series is all of three games old and he was burglarized (robbery requires violence or the threat thereof) twice in Game Three alone. Remember that Griffin likes to pitch up in the zone. As it happens, Fielder likes to swing up in the zone against righties: 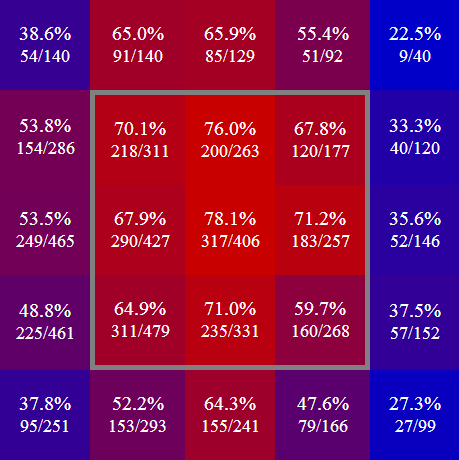 And he doesn't whiff up in the zone against righties: 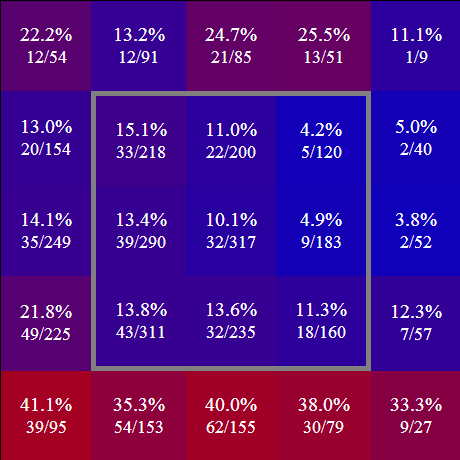 He does, however, hit the ball quite a distance when it's up in the zone from a righty, as his chart of ISO by location shows: 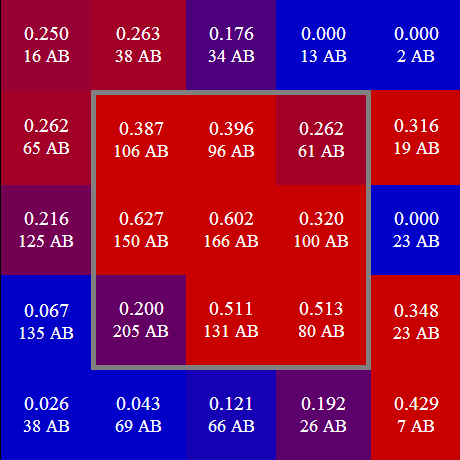 A.J. Griffin should probably take some care with Prince Fielder.

I want to sum up with a platitude. I really do. I like platitudes. Something about how a good start from Scherzer or Griffin is crucial to victory, or about how the team that strikes first will likely win, or about how the squad that most limits its mistakes will come through. The problem is that every platitude that isn't demonstrably false is a tautology or otherwise meaningless. Instead, then, I'll ask you to look back at the PECOTA odds above and then return to this: 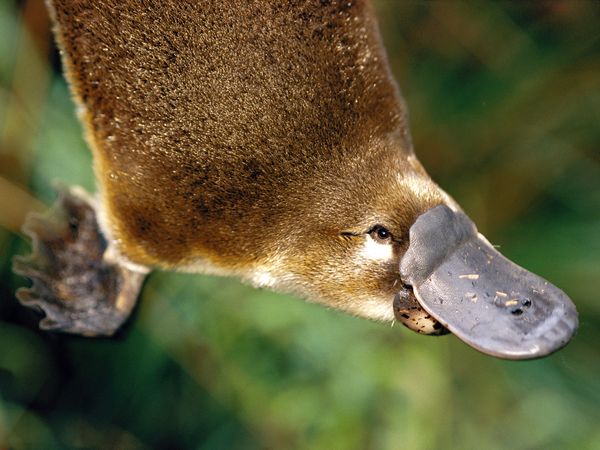 You need to be logged in to comment. Login or Subscribe
donwinningham
Is Oakland's lineup really so much better than Detroit's that they still have a 61% chance of winning a single game even given the advantage that Scherzer has over Griffin? I'm to believe that if this lineup played each other over a full season Oakland would go 99-63? Seems silly.
Reply to donwinningham
Kreylix
The A's are strongest at home at night against righties. (Well, if this year's stats are meaningful.)
Reply to Kreylix
leleutd
Thanks for pointing this out. The whole article read like Detroit is better / has better matchups, and that Scherzer is significantly better than Parker. I'm almost wondering if the author flipped the teams (that DET has the 61% chance of winning).
Reply to leleutd
doctawojo
The percentages are not flipped.

To the extent the article reads like "Detroit is going to mash the A's," it was unintentional. I think they're pretty evenly matched, though I am profoundly unimpressed by A.J. Griffin.

My goal was not to justify the numbers that PECOTA came up with but to tell you some things that are relevant going into the game. PECOTA's odds are one of those things.
Reply to doctawojo
lmarighi
I'm assuming part of the odds is also that it is at the Coliseum, and there has historically been a real advantage for the home team.
Also, I loved the platypus.
Reply to lmarighi
flyingdutchman
Also, the A's are a demonstrably better team. Factor that in, plus the home field advantage, and sure, you're getting up there at 60% or so.

I don't think Scherzer is healthy, and Detroit's bullpen does not hold a candle to Oakland's. I'd say it's it's more like 2-to-1 Oakland.
Reply to flyingdutchman
DetroitDale
I agree... this is starting to look like last years Texas series, where a superior rotation is nullified by decided advantages in bullpen and lineup. At this point, I don't understand why anybody ever gives Miguel Cabrera or Prince Fielder a pitch to hit. I can totally see Mad Max keeping the A's under three runs, and still losing.
Reply to DetroitDale