Ryan Hanigan was behind the plate for 3,623 batters this year. On average, Reds pitchers threw 3.82 pitches per plate appearance, so Hanigan called 13,840 pitches. Of those, about 36 percent were either fouled away or put into play, so Hanigan actually caught roughly 8,854 pitches. Of those, about 59.5 percent came with bases empty. With runners on base this year, however, pitchers threw 3,588 pitches in Ryan Hanigan’s direction.

That put runners on second and third, which would have put an end to it on a routine grounder to third. Scott Rolen stood at third base for 3,021 batters this yea… nah, just kidding. But you get the point: the Reds have a very good defensive team, and they lost the game because of two defensive mistakes by two very good defenders. If you’re a Reds fan, that’s just bad luck. If you’re the Reds, that’s losing.

The Giants are still long-shots, 21.2 percent likely to win the series if we declare the home-team Reds 54 percent favorites in each game. There’s a volatility to this series now that unsettles that number somewhat. With Johnny Cueto unlikely and Mat Latos fighting flu-like symptoms, it’s entirely possible the Reds will go with a 4.54 ERA pitcher in Game Four. Or, if they prefer to leave Mike Leake out of this, they will go with two pitchers on short-rest in the final two games. On the other hand, Barry Zito. Barry Zito, who has earned $80 million as a Giant, has produced a cumulative 0.9 WARP, and who this year (if you believe it) actually had his second-worst WARP, is set to have his one big moment of redemption. I remember the last time he was set to have his one big moment of redemption, back in 2010. He made it one batter into the fourth, and the Giants had to wait another day to clinch the NL West. Sure, Barry Zito. It’s somewhat disturbing that, in the postgame show on KNBR, Mike Krukow asked Ryan Vogelsong whether he was ready to pitch again in Game Four if necessary. You’d laugh it off as a joke, except Barry Zito.

***
You can have your advanced metrics, your acronyms, and your what-have-yous. I’ll take the one stat that correlates almost perfectly to winning: MLB.com highlights. And to get a sense of just how brutally the Reds had beaten down the Giants before Game Three, here are how many highlights each team had, by type:

The Giants out-highlighted the Reds 10-4 on Tuesday.

The thing about good stuff isn't just that good stuff is hard to hit. It's also that it makes mistakes easier to get away with, because hitters are getting ready for the good stuff. So Sergio Romo got away with a bunch of crud:

Postgame show:
Mike Krukow: Romo, good lord. That’s the worst stuff he’s had in a month, two months, maybe all year. And he gets it done in, what, 15, 16 pitches?
Duane Kuiper: Six of them hanging sliders.

The one run that Bailey allowed came after Ryan Vogelsong bunted two runners into scoring position and Angel Pagan hit a sacrifice fly. I've watched that play probably 50 times to try to figure out whether Bailey could have/should have thrown to third to get the lead runner or to second to at least preserve the force. I think he should have. It looks moderately clear that he could have. But I can't quite convince myself that I'm not off. Here's the play:

And a couple moments in time: 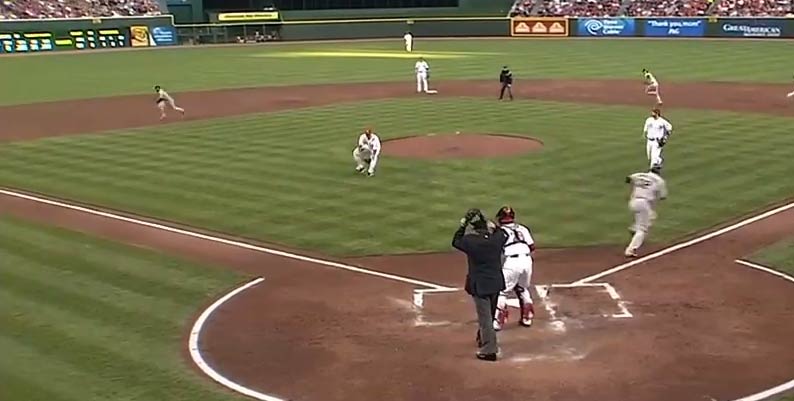 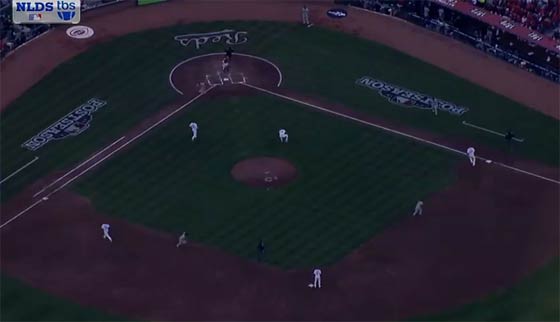 The Reds are going to win.

You need to be logged in to comment. Login or Subscribe
rawagman
I`m pretty sure he would not have been able to get the runner at second. As a right handed thrower, he would have had to spin more than 180 degrees to face the bag. The runner at second would only have been slightly under 180 degree spin. Maybe he could have looked to second, but the play was to first.
Reply to rawagman
apbadogs
No way they get Blanco at 3rd on that bunt...from the over head camera it's deceiving when stopped but in real time by the time Bailey stood up to throw Blanco was sliding.

Also, did Romo look teeny on the mound or was it just it me?

Lastly, doesn't Brian Wilson realize that his beard has run it's course and now he just looks like an absolute idiot?
Reply to apbadogs
rweiler
Romo is really teeny compared to most pitchers. He is listed as 5'11", 191 and I think both numbers are optimistic.
Reply to rweiler
surfdent48
Homer Bailey got many generous calls from the home plate umpire to help set up his strikeouts
Reply to surfdent48
rweiler
I don't think Bailey could have or should have tried to get Blanco at third especially given how many K's he was recording. I do think Rolen could have thrown out Posey at the plate if he had looked that way as Posey was expecting the play to be made and was looking back over his shoulder and not running very hard until after Rolen bobbled the ball.
Reply to rweiler
dianagramr
As an aside, isn't it great that Bailey has FINALLY met the lofty expectations and hope placed upon him from the time he came into the Reds.
Reply to dianagramr