With the 2012 regular season in the books, it’s time to look at how clubs did at selling tickets. Yes, they call it “attendance,” but it’s really “paid attendance,” a showing of tickets sold and rarely reflective of actual butts in the seats. The league’s 30 clubs drew 74,859,268 over 2,423 games this year: an increase of 2 percent. While this wasn’t as good as I projected before the season started, it was the league’s largest year-to-year growth since the 2007 season total rose 4.6 percent over 2006. Nine clubs drew more than three million in paid attendance this season, while 13 clubs eclipsed the 2.5 million mark. In addition, this is the second consecutive season that total attendance increased over the previous year and marks the highest attendance since 2008. When things are all said and done, 2012 will rank as the fifth-best single-season in MLB history in terms of attendance.

That’s the good news. The bad news is that attendance between 2010 and 2011, while technically up, was basically the same. The league sold 397,715 more tickets last year than 2010, or an increase of less than one percent. Let’s call that what it is: flat. In fact, over the last four years, the league has seen attendance pretty much remain flat. When you factor in new ballparks for the Mets, Yankees, Twins, and Marlins over the period, this tells us that either the sour economy still holds its grip on America’s discretionary income or MLB’s true “golden era”, as Selig likes to call it, was really 2004-2008 when attendance soared. Still, the league has to be happy; last year, the Dodgers’ attendance cratered during Frank McCourt’s tenure, and there were a considerable number of rainouts. This season, rainouts weren’t as high, and with the two additional Wild Card teams added in, the races for a postseason berth were more compelling.

Here is the breakdown of attendance for MLB since 2000: 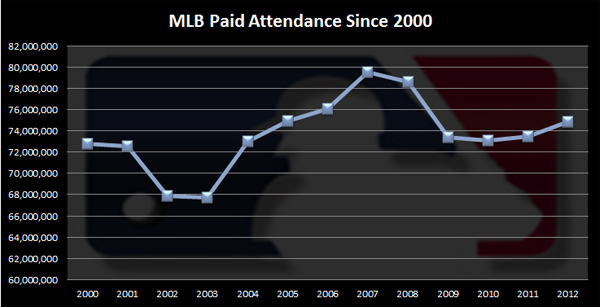 As mentioned, the Marlins celebrate the largest year-over-year increase in the league this year at 44.16 percent thanks to their brand-spanking new ballpark in Miami and being hyper-aggressive on the free agent market, landing Jose Reyes, Heath Bell, and Mark Buerhle. While, that’s good for the Marlins and the league in some respects, at an average of 27,400 per game, it will go down as the worst average paid attendance for a new ballpark opening since 2000. Here’s the listing of the 14 clubs who opened a new ballpark over that period, their opening date, and the average attendance, sorted worst to best:

In terms of total attendance, the Phillies (once again) topped the charts at 3,565,718, or over 100 percent of Citizen Bank Park’s capacity. To those that look at the standings and ask how that’s possible, paid attendance comes largely in the offseason prior. Since the Phillies performed well in 2011, it would make sense that season ticket sales during the 2011-12 offseason would be good. While the club’s average paid attendance declined 3.12 percent (115,000 fewer in total), the number of tickets sold remained solid. That is sure to change next season when sales figure to drop given the disappointing 2012 season that just unfolded.

The Texas Rangers are the other big attendance story of 2012. The club finished third behind only the aforementioned Phillies and the Yankees. When you consider that in the last year former owner Tom Hicks owned the club (2009) they ranked 17th, it’s a good sign. The sobering news will be the disappointing loss to the Orioles in the AL wild card play-in game. It’s also highly possible that it was Josh Hamilton’s last game as a Ranger, as well. As with the Phillies, expect Texas’ attendance to dip in 2013, though not nearly as dramatically.

In a sign that fans really do care who owns their team, the Los Angeles Dodgers increased attendance this as fans anticipated the end of the Frank McCourt era. With a seating capacity of 56,000, the Dodgers have by far the largest seating capacity in all of the majors. So while Dodgers Stadium only averaged 73.3 percent of capacity, they still drew almost 390,000 more fans than last season (389,107, to be exact).

As mentioned, the Astros took a beating at the gate with the league’s largest decline. How bad was it? The club drew 459,283 less this season than 2011. When you consider that Houston’s attendance dipped 11.34 percent from 2010 to 2011 (264,474 in total paid attendance), it’s concerning. The club, who has stripped the player payroll down to the bone, enters the AL West in 2013, where spending in free agency has been rampant due to new local television deals (Angels and Rangers).

Speaking of the Angels, it seems the Albert Pujols signing didn’t exactly turn out as planned. Not only was he supposed to help in the standings, pushing them past the Rangers (he didn’t, and they missed the playoffs entirely), Pujols was supposed to be marketing gold for Arte Moreno and the Angels. The club still ranked in the top 10 (seventh overall) but looked on as attendance declined 3.3 percent, amounting to 104,551 fewer tickets sold. While just over 3 percent doesn’t sound that bad, consider this: it was down last season as well (2.6 percent). With the poor showing this season, expect the drop to continue in 2013.

Some other attendance tidbits:

Here is the entire league compared to last season:

POSTSEASON TELEVISION TIDBITS
Since we’re in the throes of the postseason, here are a couple of notes on the television front that might interest you.

As we all know, this year marks the first time that there are two Wild Card play-in games. TBS’s exclusive, live doubleheader coverage of Major League Baseball’s first-ever wild card games on Friday averaged a 3.7 overnight rating, per Nielsen. The network’s telecasts, marking the start of the 2012 MLB postseason, were up 12 percent compared with an average 3.3 overnight rating for the entire Division Series last year. When compared to the first day of the 201 postseason (Texas vs. Tampa Bay, ALDS Game 1: 2.3 overnight rating), the Wild Card games were up 61 percent.

After the final numbers came in, coverage of the Wild Card play-ins averaged 4,608,000 total viewers, up 61 percent over last year’s 2,866,000 viewers for the first day of the MLB postseason. The average 3.0 U.S. household rating for the Wild Card doubleheader was an increase of 58 percent over last year’s 1.9 rating for the first day of the postseason.

The numbers the following day were a bit trickier to decipher. After all, on the first day of the postseason, the league’s broadcast schedule pitted the games against NCAA College Football games. According to TBS and Nielsen, MLB’s games averaged 3.9 million total viewers for TBS’ exclusive coverage of the first-ever Wild Card and Saturday night’s Division Series doubleheader—an increase of 26 percent compared to the first two days of the MLB postseason last year. The corresponding 2.5 U.S. rating, based on Nielsen Fast Nationals, is up 25 percent over last year’s 2.0 rating.

You need to be logged in to comment. Login or Subscribe
rawagman
It looks like something is amiss in the numbers for Atlanta. Either 2012 and 2011 numbers are inverted or the year-over-year percentage change is. Either way, thanks for presenting the figures.
Reply to rawagman
bornyank1
Fixed.
Reply to bornyank1
mbrown
Hi R.A.,

Average attendance for ATL was 29,878 in 2012, compared to 30,037 in 2011, a decrease of 0.53%. The table looks correct to me.
Reply to mbrown
rawagman
What I meant was that more total tickets were sold in 2012 than in 2011, but the average per game went down, and the percentage dropped.
How does that work?
Reply to rawagman
Oleoay
According to B-Ref, I have ATL 2012 attendance as 29,879 per game and 2011 attendance as 29,296 per game. The overall attendance numbers match between B-Ref and Brown's chart (2,420,171 and 2,372,940).
Reply to Oleoay
cdmyers
Is there data out yet on average ticket prices?
Reply to cdmyers
mbrown
Team Marketing Report does something every year
Reply to mbrown
terryspen
The Rangers lost to the Orioles, not the A's, in th play-in game.
Reply to terryspen
mbrown
Fixed
Reply to mbrown
mschieve
Does TBS or MLB report on how many people use their predictive games? I think more and more shows will start using this second screen experience and they will gain instant access to their viewers.
Reply to mschieve