The Yankees and A's played for almost six hours on Saturday afternoon into Sunday evening, using 18 pitchers and 29 position players between them. In the top of the 13th inning, the A's homered three times to take a 9-5 lead. In the bottom of the 13th, the Yankees tied the game on four hits, including the second home run of the day by Raul Ibanez (who'd last hit one on August 5th). It was a weird one, and one both teams badly wanted to win.

The 14th and final inning was the weirdest of all. Eric Chavez led off the bottom of the inning with a single, and Joe Girardi removed him for pinch-runner Melky Mesa, who was making his major-league debut. The 25-year-old Mesa got the call from Triple-A 11 days earlier, but it took 14 innings and a depleted bench to get him into a game. And when he finally did debut, he represented the winning run in a game with playoff implications. The Orioles had already won, putting additional pressure on the Yankees to preserve their one-game lead in the AL East.

It wasn't long before Mesa was on the move. Derek Jeter sacrificed him to second, and Ichiro was intentionally walked, bringing Alex Rodriguez to the plate. On 0-1, Rodriguez singled to center. The whole ballpark began to celebrate, expecting Mesa to score. All Mesa had to do was run from second to home, something he'd done hundreds of times in the minors, where the distance between bases is exactly the same. But instead of greeting his teammates in a mob at home plate, Mesa did this:

Maybe Mesa was nervous. Maybe he'd read too much Mike Lupica and was unprepared for A-Rod to come through in the clutch. Maybe he just stumbled at an inopportune time. Whatever the reason, Mesa realized that he'd missed the bag and went back to third, putting the celebration on hold. In the dugout, the team briefly went into walk-off mode before abruptly aborting. Some Yankees hopped over the fence, awkwardly embraced before their brains could process what happened, then hopped back:

Others hopped over, immediately turned around, and tried to get back to the dugout before anyone noticed: 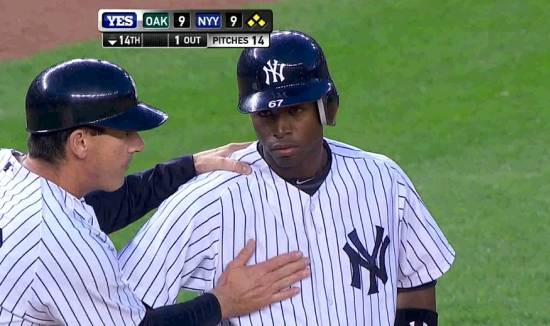 On the next play, Robinson Cano hit a one-hopper to A's reliever Tyson Ross, who threw home to force out Mesa. Mesa went back to the dugout looking like the unhappiest person on Earth. But his depression wouldn't last long. Two pitches later Eduardo Nunez hit a grounder to first, Brandon Moss bobbled it, and Suzuki scored. The Yankees were winners, and Mesa's mistake was meaningless. Cue the stay-of-execution smile: 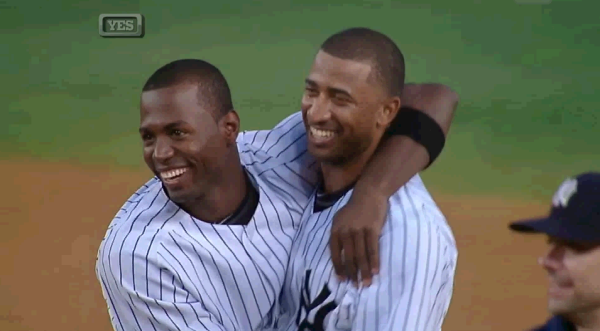 Some players hit home runs in their first at-bats. Others at least look like they belong. Mesa made the rookie mistake to end all rookie mistakes, one that could have cost the Yankees a division crown. And in the end, it didn't matter. Mesa has a story he can tell the rest of his life, and it has a happy ending.

You need to be logged in to comment. Login or Subscribe
edwardarthur
Great stuff! The name Fred Merkle did cross my mind....
Reply to edwardarthur
Oleoay
Just think, if the Yankees hadn't won, he would've had the honor of making the front page (and back page) of the NY Daily News.
Reply to Oleoay