Things could be going better for Ryan Howard. Since he returned to the Phillies' lineup, on July 6, he has played 62 games. Eleven Phillies with at least 100 plate appearances have a better OPS than Howard does this year, and 18 National League first basemen—Lyle Overbay, Travis Ishikawa, Jeff Baker, etc.—do, too. He has struck out in a third of his plate appearances—not at-bats, but plate appearances—which, even for him, is outlandish. On the road he’s even less useful; against lefties he’s hilarious; in September he’s been worst of all. It’s the first year of his $125 million contract.

But there’s one thing. With Ryan Howard, there’s always one thing, which makes you wonder about that one thing:

He has 46 RBIs, in 62 games. Over a full season, that would be 120 RBIs. Over 150 games, it would be 111 RBIs. I know it’s probably been a while since you spent much time with RBIs, but there’s some chance 111 RBIs would lead the NL this year. Only two NL players have driven in more runs per game than Howard, even though he's terrible and the lineup around him is nothing special. I can’t believe I’m spending this much time on RBIs. RBIs!

But RBIs are such a part of the Ryan Howard story, who has the same career WARP as Aaron Hill, and who has still finished in the top 10 in MVP voting each full season he has played. I, personally, find this annoying. Ryan Howard probably finds me annoying. And, somehow, Ryan Howard is going to end up winning this argument, at least to a point.

But that’s probably mostly just because of intentional walks? And the fact that sacrifice flies don’t count against his average and slugging percentage?

Matt Schwarz addressed this split in 2009, when he was competing in BP Idol.

The MLB cumulatively had a BABIP .006 better with men on than when bases were empty in 2008. … Thanks to the ways teams use the shift (and without any voodoo or secret sauce from Joe Morgan), Ryan Howard is clutch.

Is this enough to explain Howard? Six points of BABIP and 32 points of BABIP are tremendously different. Especially when we consider that the shift is actually not a simple toggle between bases empty and runners on. It’s more of a spectrum, which is applied a bit differently from situation to situation. There are eight possible ways for the bases to be filled, partly filled, or empty. Looking over the past couple weeks of games, we can see how defenses (in general*) play Howard in each of those states. And, looking only at BABIP, we can remove the distorting effects of intentional walks and sacrifice flies on a slash line. 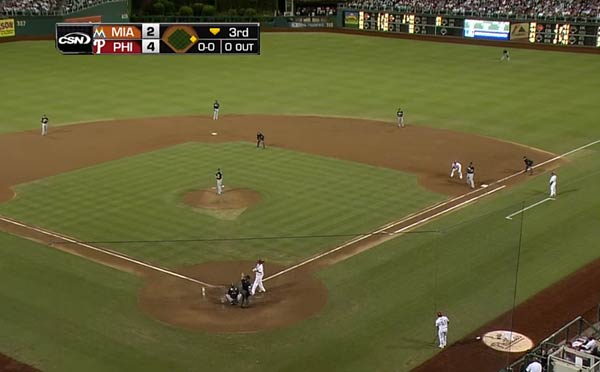 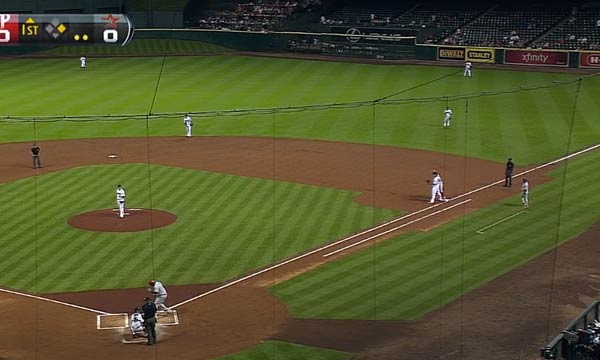 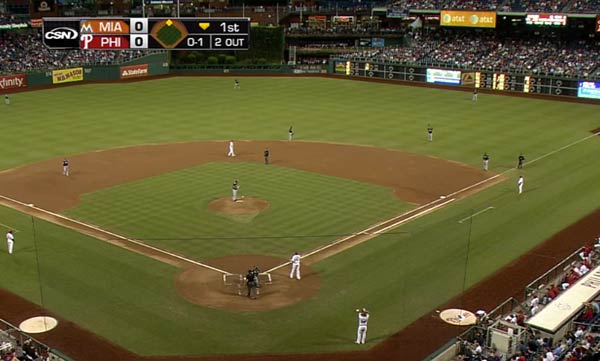 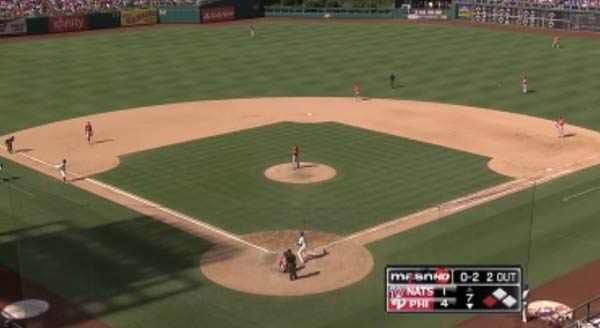 Runners on first and second: No shift 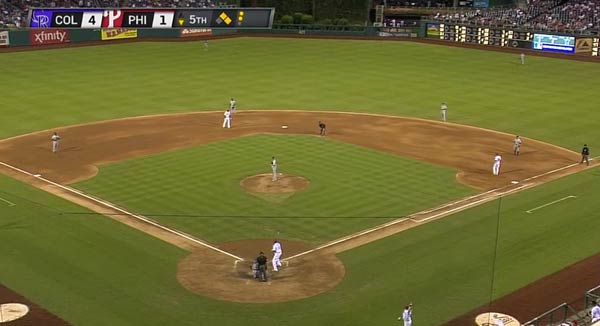 Runners on first and third: No shift with less than two outs, full shift with two outs. 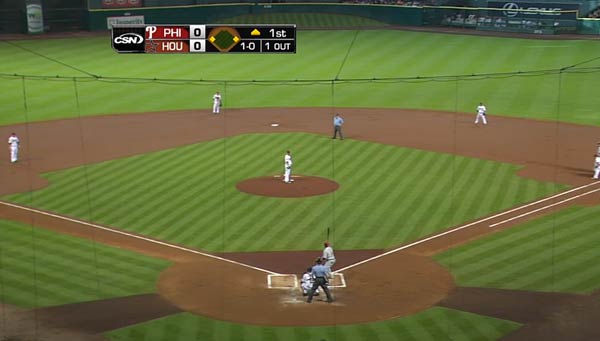 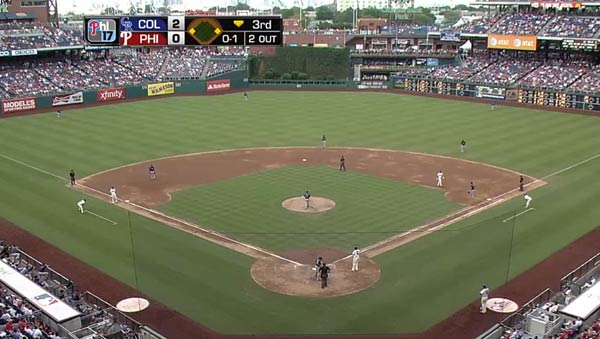 Runners on second and third: No shift. 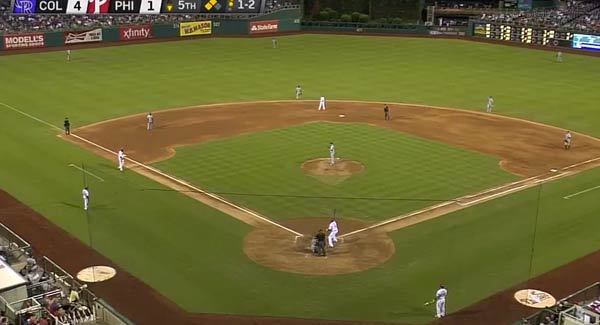 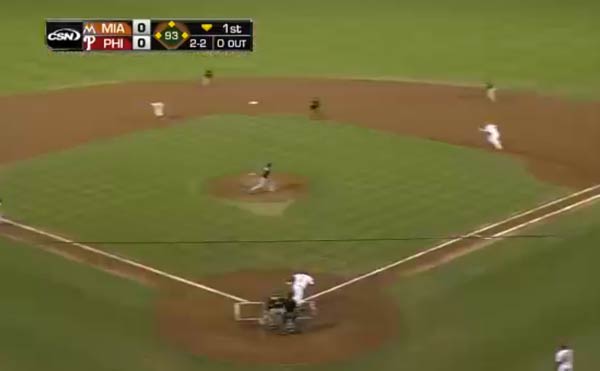 To turn this into a table, then.

Our sample sizes aren't what we would like them to be at this point—some splits as low as 80 balls in play—so we won't conclude anything. But we can tease Howard's splits out a bit further and divide these generally into three categories: Nobody on base (shift), runners on base (no shift), and runners on base (shift). And here's how that goes:

So if these numbers mean anything, or if they suggest anything, without concluding anything, then they suggest that Howard benefits from "clutch" situations when the defense can't shift. But that, even when there is no shift, he gets more hits with runners on. Fascinating! Or just one of those things!

What's important is that Howard is still doing it. In the middle of a terrible year, in which he has become a very poor hitter, he is still doing the thing that got him paid in the first place. So there are three possibilities here.

1. Ryan Howard is "clutch," by which we mean he somehow manages to be a better baseball player when there are runners to drive in.
2. Ryan Howard is particularly difficult to defend when runners are on base, which is just as useful as the first possibility, if less mystical.
3. Ryan Howard is a statistical outlier who flipped heads a whole bunch of times in a row.

If it's the first one, Ryan Howard gets to laugh at us all, or at least at me. If it's the second one, shoot, I'm fine with Ryan Howard laughing at us all, or at least at me. And if it's the third. Well, if it's the third, we'll probably never convince anybody otherwise at this point. Because he's still doing it, and it looks like he'll probably run down the clock before the math can catch up with him. Ryan Howard may not be great. He may even be bad. He may get booed for the final four years of his contract. But Ryan Howard will never have to give back those RBIs.

*Shifting tendencies vary from team to team, and sometimes even from game to game, or even pitch to pitch. So this piece is, given the scope of our inquiry, assuming only general tendencies based on observation of about 10 games.

Thanks to Bradley Ankrom for research assistance.

You need to be logged in to comment. Login or Subscribe
zasxcdfv
It seems to say that the shift works.
Reply to zasxcdfv
mschieve
Tell me more of this BP idol.
Reply to mschieve
Behemoth
You could click on the link provided.
Reply to Behemoth
BillJohnson
I detect in this article the beginnings of a shift away from BP's long-standing antipathy toward RBIs as a stat, and in my opinion, that shift is long overdue. RBIs have long been dismissed condescendingly here with the observation that driving in runs isn't a skill. Maybe it isn't; for the majority of players, clearly it isn't. However, it is still a good thing to do, and big RBI totals may serve as a marker that the player amassing them needs to be looked at more carefully. Usually that careful look will find that the totals are either a statistical outlier or the result of an unusually large number of opportunities. Sometimes it doesn't, though.

The problem with out-and-out dismissal of RBIs as significant is that it deters the deeper looks at the exceptional cases, like what you're doing here. There's a lesson to be learned from this. Thanks for swimming against the tide.
Reply to BillJohnson
cdt719
I haven't heard too much poo-pooing of RBI divided by RBI opportunities, though. The argument against RBI is that they are team dependent, but dividing them by opportunities removes a large part of the dependency.
Reply to cdt719
piraino
Great article. Your explanation of the situational use of shifts against a left handed hitter makes sense of something I never really understood before.

Obviously I don't have the sample sizes for the batting average splits you cite but Ryan Howard only has about 4666 career plate appearances. Once you break that out into a 2 or 3 way split the standard error for a difference between the split batting averages might be 20 points or more. Howard is one player out of thousands and his "skill" probably isn't even two standard errors from no skill at all. Statistically, this isn't even enough of an outlier to bother taking notice. Still, a great article well worth the read.
Reply to piraino
KerryHofmeister
Fairly new BP reader,so forgive me if this question is laughable. Is any work being done with RBI efficiency? It seems to me that RBI / RISP chances would at the start be a lot better than RBI as a counting number. This could be improved further by adding the weighted outcomes of all the different out and baserunner opportunities that exist. This would factor out a lot of the reasons that make RBI (almost) worthless. However, you still have the variables of baserunner skill and speed just to mention a couple. I am sure something is wrong with my line of think, but it just struck me as interesting.

Reply to KerryHofmeister
Bob1475
As a Phillies fan I have been in countless discussions over the value of Ryan Howard. No matter his other stats he generates runs.

To further support the shift data I suggest you look closer at his first two years before the shift became the standard defense. First year. 288 and second year. 313. Then came the shift.
Reply to Bob1475
jfranco77
Another couple of guys who face a pretty strong shift:

I know there is an element of "pitcher distress" here - a pitcher who already put someone on base is probably more likely to do it again - but it seems like the shift works, and these guys thrive when the opposing team can't do it.
Reply to jfranco77
tweicheld
I don't know how this can be quantified, but IF or WHEN he hits the ball with men on base, he always seems to hit it very hard. Sometimes they end up being DP's, but he seems to hit very few weak grounders or popups. He either hits it hard or whiffs. I'm a Phillies fan, and the strikeouts drive me crazy, but he has always put up huge RBI numbers. Another strange thing BP could look at some time: he has unusually good career numbers when pinch-hitting.
Reply to tweicheld
fawcettb
My conclusion from all this is that Howard needs to learn to hit the other way when there's a shift on if he wants to continue his career.

Reply to fawcettb
benjh5
Don't most players hit better with runners on base because the pitcher is less comfortably pitching out of the stretch? You never went into how Howard compares to the league. As a cleanup hitter, Howard comes up in more situations with runners on base, especially in scoring position, and thus has a greater chance to turn his at bats into RBIs. Either way, you did the best you could trying to turn a poor hitter into something slightly better. On the other hand his lowest career wRC+ other than this season was 120. He creates runs, but not as many as he should.
Reply to benjh5
lyricalkiller
BABIPs don't really (generally) go up much with runners on base. Leaguewide, it's about four or five points difference, and most players' BABIPs with runners on or with bases empty are within a few points after a long enough career. There are some outliers. Howard, of course, but also Omar Vizquel, Miguel Cabrera, Chase Utley. And, of course, it's totally 100 percent possible that Howard is just a fluke of percentages.
Reply to lyricalkiller
benjh5
Nice, thanks for the response. Interesting that there is no significant difference BABIP-wise with runners on-base vs. bases empty. I remember as a hitter, always feeling a bit more confident when the pitcher threw from the stretch because they also had to worry about base runners and the possibility of throwing a wild pitch. I guess the lack of difference in BABIP's points towards true professionalism and just the difference in talent level in the Majors vs. other lower levels of play.
Reply to benjh5
anderson721
I'm curious to know if there is a significant difference in BABIP between lefties and righties. Especially slow ones.
Reply to anderson721
MWest333
CLUTCH!!!
Reply to MWest333
brian206
Ryan Howard is clutch because the Mets are never allowed to win a game at home after July 5th.
Reply to brian206
rawagman
I sometimes get the impression that we denigrate the RBI stat overmuch. Perhaps, as we focus so much on stats that foretell future stats, we ignore (at our peril) stats that narrativize the game as it is played?
Reply to rawagman
AWBenkert
So what you're saying is, Howard is kicking the shift out of other teams.

Get the f out of here.
Reply to AWBenkert