The last time I was at a Spring Training game, I tossed down a couple bucks for charity, threw dignity to the winds, and stepped into the radar gun tent.  I used the first two pitches to ramp it up before letting fly for reals on the third: 72 mph. I carried my beer left-handed for the rest of the day.

I bring that up because you should understand who is writing this, but mostly because speed is sexy. We all love to watch a 100 mph pitch because it’s amazing but also because it’s rare. Most major league pitchers, let alone internet writers, can’t throw that fast no matter how many times we embarrass ourselves in front of small children throws we make. When at a game, we count the number of pitches that break 100. For example, take a look at this Aroldis Chapman fastball:

Yay! Fast! How can you not cheer for that? Speed is hypnotic, dizzying, breathtaking, and pants-wettingly wonderful. But what about slow? What about the slowest pitches? In fact, what was the slowest pitch thrown this season?

It’s hard to criticize the computer for that call.

Major League Baseball doesn’t know how fast Barry Zito’s pitch traveled its roughly 40 foot long path and neither does any PITCHf/x. Here is a graph of the pitch speeds from Carlos Quentin’s second inning plate appearance against Zito when that pitch was thrown:

Astute readers may detect a discrepancy between this graph and the GameDay data in the screen grab above. The screen grab shows five pitches, the correct number, but this graph only shows four. Here’s how it should look: 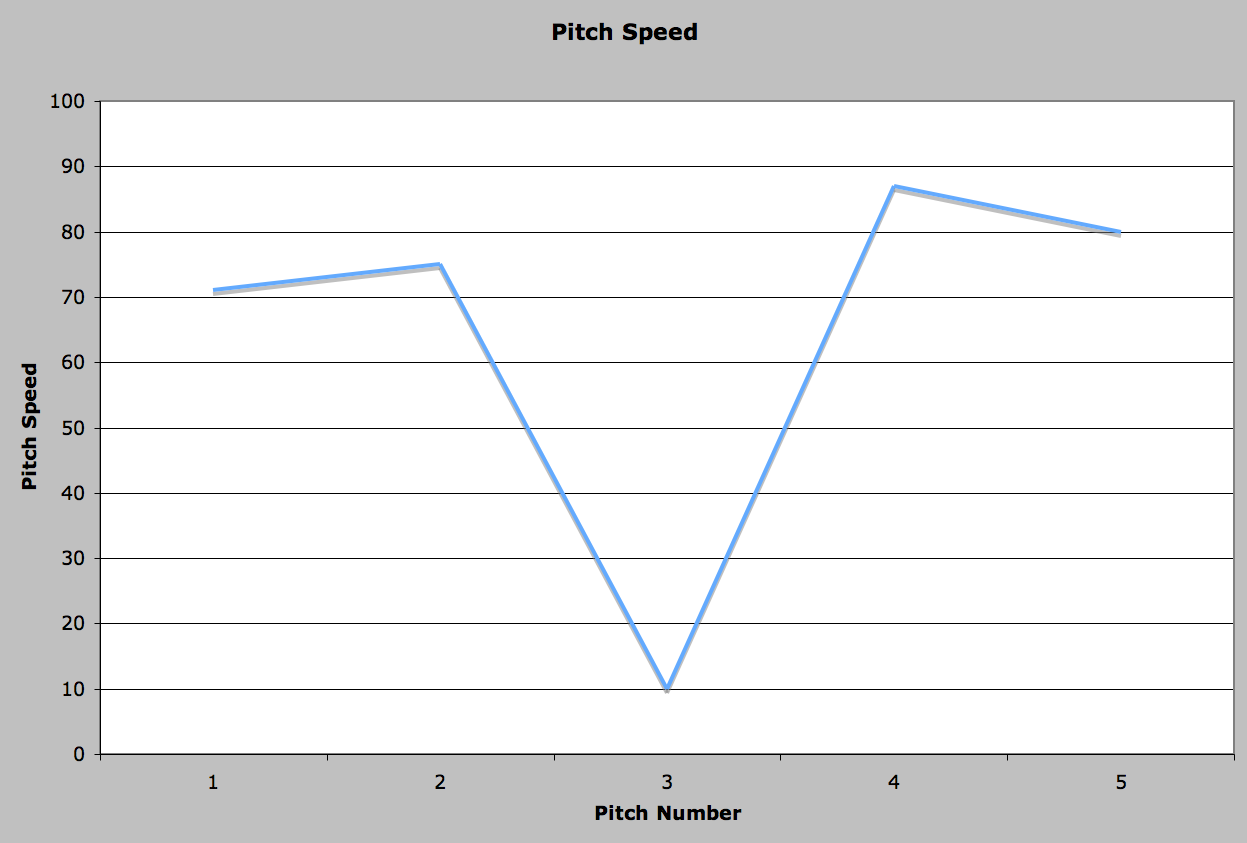 Am I giving Zito too much credit? Is 10 mph too fast? Maybe.

This is one of the problems with trying to find the slowest pitch thrown this season. If it’s crazy slow, that’s good, except then the computers might not count it and it might not show up in my search. So there are problems, but in the end, when you make a list of the slowest pitches thrown this season you end up with a list filled with four things:

Mistake pitches are funny, and we all enjoy a good laugh at the expense of a highly paid professional athlete from time to time, but they’re not in any way intentional. I’m looking for the slowest pitch that was thrown on purpose. So those are out.

Intentional balls are thrown on purpose. It’s right there in the name. But those aren’t thrown for the purpose of trying to get the hitter out. In fact, they’re the polar opposite of that. They’re trying to put the runner on base. So those are out, too.

When I thought up the subject of this column, I emailed BP’s Bradley Ankrom and he was kind enough to send along an Excel document containing the top 100 slowest pitches thrown this season. I was ecstatic. Perfect! Job complete. A couple witty one-liners and that’s a column (yes, that’s sadly how I think). I quickly downloaded the spreadsheet and looked at the top (bottom?) of the list. It said the slowest pitch thrown this season was a Jake Peavy curveball thrown to Alex Avila in the second inning of the White Sox/Tigers game on July 20th. It registered at 47.4 mph. Wow, I thought. That is sllllooooooowwww. I quickly called up that game, that at-bat, and that pitch. Here is what GameDay says about it (it’s pitch number two):

Promising! So I loaded up the video. Here it is: 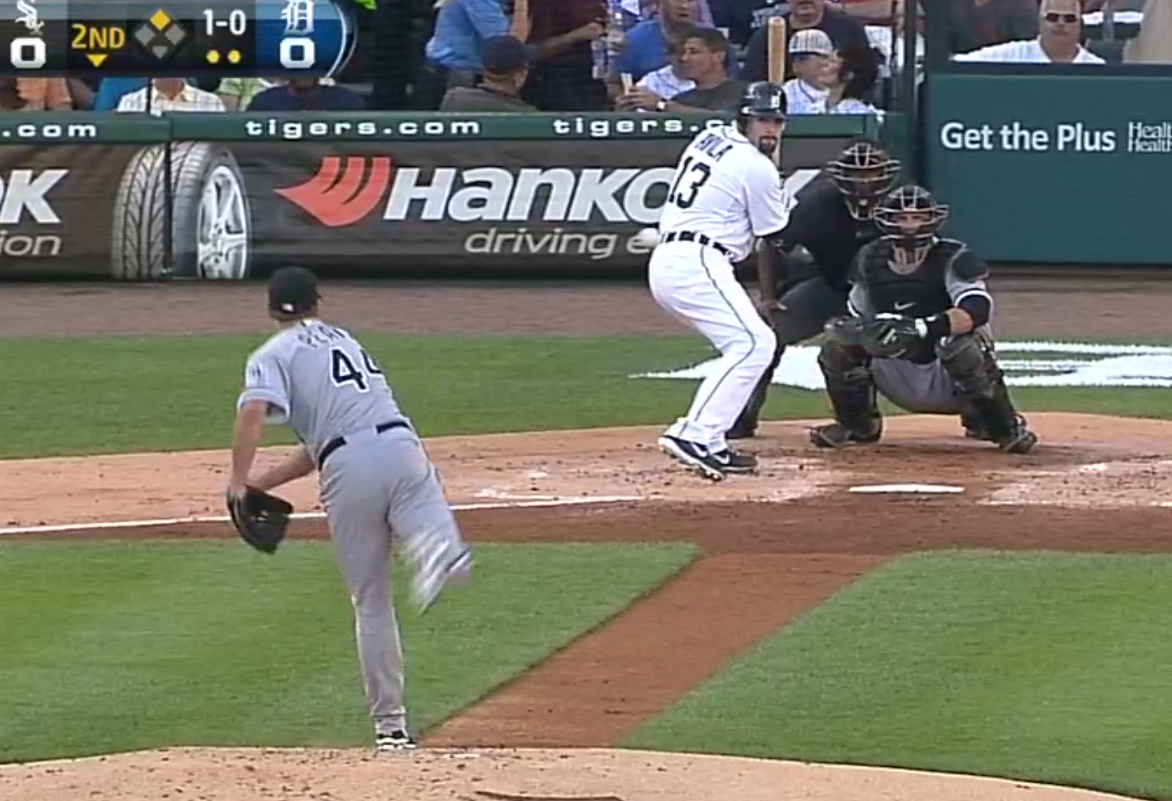 The pitched ball is just to the left of Avila’s belt on its way to the plate. You can already tell by it’s trajectory that it was thrown harder than 47 mph. And indeed it was: 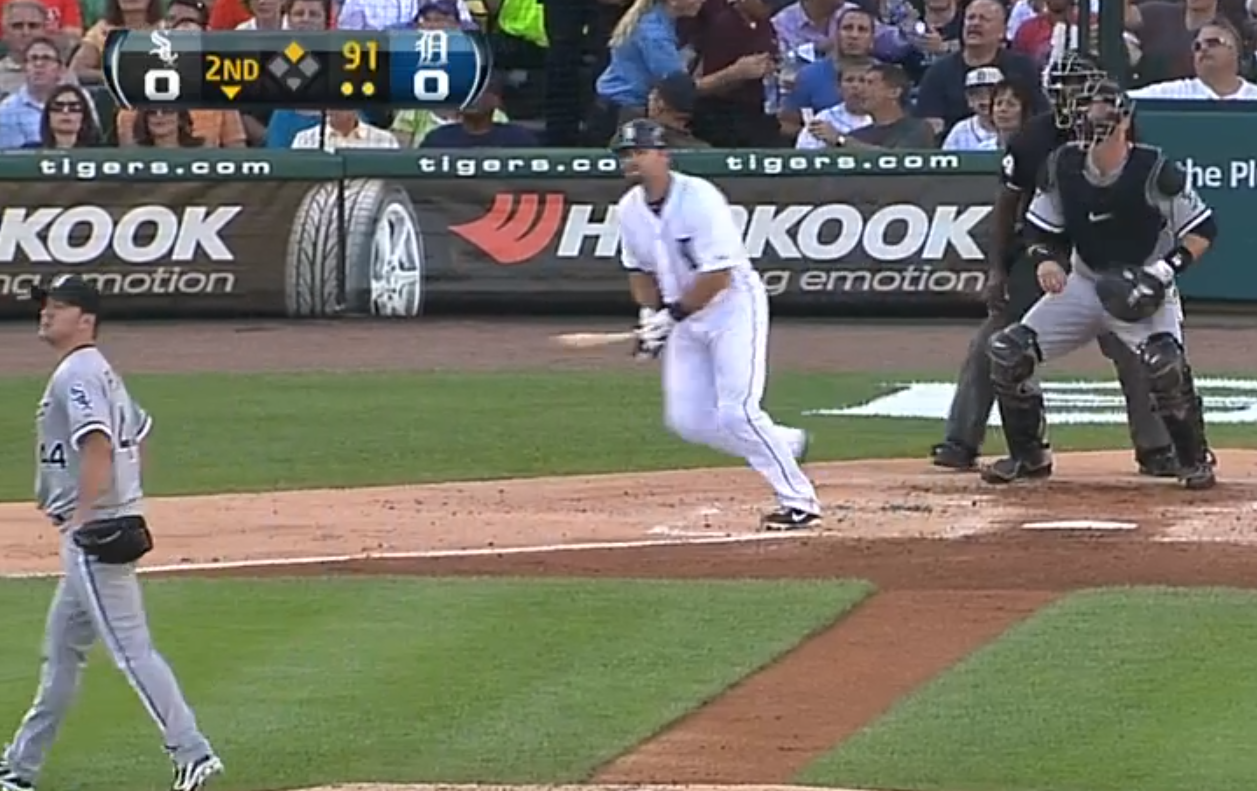 91 mph? That’s a bit different than 47. Moral of the story: sometimes the computer screws up.

Which brings us to the final category one finds when attempting to put together this list and this column: Vicente Padilla’s eephus pitches. Of the 100 pitches Bradley sent me, 51 of them were Padilla eephus pitches. In fact, of the top 20, 17 are Padilla eephus pitches (ephees?)[ed–eephi]. Not that there is anything wrong with that. Padilla’s eephus pitches may be ridiculous but they meet the dual criteria of being thrown on purpose and trying to get the batter out. So they’re in. This will inevitably cause Padilla to sweat. I know this only because everything in the world causes Padilla to sweat.

OK, enough ado. If you don’t count Peavy’s 47 mph 91-mph-fastball, there have been four pitches thrown this season that broke the reverse 50 mph barrier. This is not one of them:

A quick note: three of the four slowest pitches are Padilla eephus pitches, so in the interest of space, I cut the fastest of them, a 49.7 mph pitch to Munenori Kawasaki on June 30th. I trust you won’t miss it. Now, the three slowest pitches (that I could find) thrown this year.

Down 2-1, Wolf battled Phillips throwing him a two-seam fastball, a cutter, and then three straight four-seam with speeds of 90, 89, and 90 mph. Phillips fouled off the 90s and took the 89 for a ball bringing the count to 2-2. So Wolf tried to change the pace a bit. Like this:

The 39.8 mph difference between pitches might have fooled Phillips, who looks eager to swing, had the pitch been anywhere close to the plate. It wasn’t. Ball three. Next pitch was a four-seam fastball for ball four.

Favorite Part: When catcher Martin Maldonado tries to frame the pitch at the very end.

Vicente Padilla has never been accused of lacking confidence. This can be inferred from various post-game comments he has made, but also from pitches like this one. How heavy do your stones have to make the first pitch you throw to a power hitter in the eighth inning of a 9-9 game a sub-50 mph eephus ball?

It worked, as Morales popped out to shortstop Mike Aviles. Padilla was a part of the good half of the eight Red Sox pitchers that day who did not allow a run. Alfredo Aceves, who gave up five runs, followed him.

Favorite Part: The stutter step that Morales does while waiting for the pitch, desperately trying to keep his weight back. He failed.

Padilla started off the inning with a 54 mph eephus pitch to Dan Uggla, who fouled it off. Four mid-90s fastballs later Uggla would fly out. Padilla’s next pitch, his first to Freeman, is the slowest pitch (I can find) thrown this season:

The next hitter, Chipper Jones, got five straight four-seam fastballs before he flew out. Then, with two down, Jason Heyward received a 92 mph fastball, an 86 mph slider, and a 52 mph eephus ball, which he grounded back to the pitcher. Fourteen pitches, three of the eephus variety including the slowest of the season, and Padilla could return to the dugout, job done.

Through Saturday’s games there have been 630,821 pitches thrown in the major leagues. The vast majority of them have been between 75 and 95 mph. Some a little bit higher, some a little bit lower, but most have been in that range. It’s my contention, though, that while we cheer for the fastest, the rare 102 mph flashes of lightning, we should also appreciate the slowest of the slow, the extraordinary little league pitch in a big league game. Not everyone can throw 102 mph, and if we could we all would, but we all can throw 48, we just choose not to. It takes a special person to do it on purpose.

You need to be logged in to comment. Login or Subscribe
swarmee
If Quentin stayed in the batter's box, does it count as an HBP when it rolls into his foot?
Reply to swarmee
aaronbailey52
Only if he "tried" to get out of the way
Reply to aaronbailey52
MattGeer
I must say I do enjoy a good eephus pitch instead of a 100 mph fastball...
Reply to MattGeer
bwilhoite
This was great... You got a solid out loud chuckle from me a couple of times!
Reply to bwilhoite
mhmckay
As a Red Sox fan, when I saw your title I immediately thought "Padilla" glad to see I was paying attention this year!
Reply to mhmckay