From May 21st through June 7th, Darvish faced four teams in a row for the second time. In those four starts, he pitched 20 2/3 innings, allowed 15 runs, and walked 18 batters. Suddenly, instead of wondering whether Darvish would win the Cy Young award, people were wondering whether the league had figured him out. Even during his successful stretch to start the season, he'd averaged a walk every two innings. Maybe, the thinking went, the league had learned how to deal with Darvish: don't swing. No matter how nasty his stuff seemed, if it wasn't in the strike zone, it wasn't a threat. Batters could simply stand at the plate with their bats on their shoulders and admire its movement on its way out of the zone, then either take a base on balls or wait for Darvish to get desperate and throw them something hittable. When Dave Cameron dug into the numbers, he discovered that teams were actually swinging less often in their second duels with Darvish, even though PITCHf/x said he hadn't thrown fewer strikes in those starts. Uh oh.

Since then, in eight starts against teams that have already seen him, Darvish has walked 4.3 batters per nine and struck out 11.5. In six starts against teams that were facing him for the first time (including a start against the Padres at Petco and an outing against the Astros), he’s walked 3.1 and struck out 10.5. In other words, nothing to worry about. If the league adjusted to Darvish during those four starts a few months ago, Darvish has adjusted right back. After going eight innings and allowing one earned run on Saturday against the Rays—a team he was facing, and dominating, for the second time in two weeks—he's riding a streak of six straight quality starts (and four with two walks or fewer).

I'm on a bit of a Bill Veeck kick, so everything reminds me of something I just read in Veeck as in Wreck. Over the weekend, I excerpted a story about Kenley Jansen's spiritual predecessor, Russ Christopher. Now I'm going back to the well for one about Gene Bearden, who may have suffered the fate it briefly seemed was in store for Darvish.

The brief backstory: in October of 1946, the Indians made a fairly major move, sending Allie Reynolds to the Yankees for Joe Gordon. The deal worked well for both teams, but it left the Yankees in need of an infielder. So a couple months later, the two teams made another exchange. Veeck sent second baseman Ray Mack to New York for outfielder/pinch-hitter Hal Peck, one of Veeck's favorite players. To even out the deal, both teams threw in a player (the one Cleveland included, minor-league catcher Sherm Lollar, would go on to become the best player in the trade), and the Yankees gave the Indians their pick of one additional minor-league pitcher from a list of six or so. That's where we pick up the narrative: 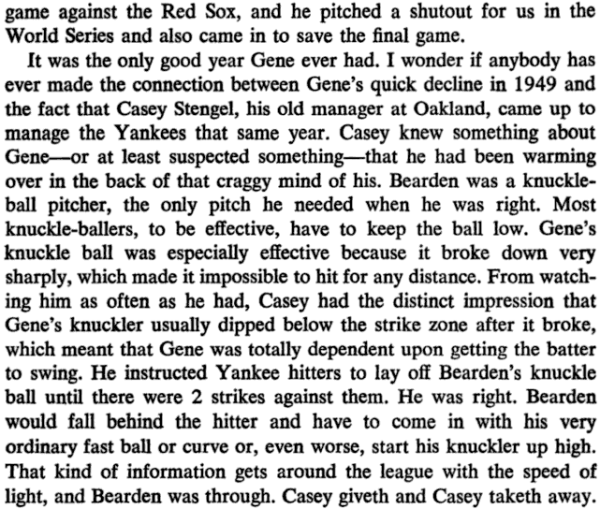 Bearden pitched for parts of five more seasons, posting a 90 ERA+. He was probably in for some regression anyway after 1948, Stengel's scouting aside, but there certainly could have been something to the story. Bearden had only one plus pitch: if he couldn't locate it or get batters to chase, he was out of ammo.

If the secret to approaching a player got around the league at the speed of light in 1949, it travels faster than the Millenium Falcon today. Successful advance scouting in 2012 doesn't depend on a single Stengel spotting something and spreading the word: every team has a staff full of advance scouts, video scouts, or stat guys who can spot any sign of weakness. Fortunately for Texas, Darvish has too many weapons to be disarmed that easily. He's way too good to be Beardened.

You need to be logged in to comment. Login or Subscribe
onetimeforall
One thing about Darvish is that he isn't pitching the same way now as he was earlier in the year, so even teams who have seen him already, when he faces them the rest of the year they won't be seeing the same pitcher.

Doug Thorburn detailed the timing adjustment he's made in his delivery. I wonder if Dan Brooks could break down if there has been a significant change in his pitch selection.
Reply to onetimeforall
bornyank1
Dan kinda did take a look at Darvish's pitch selection. That's the sort of thing I was talking about with my blather about "too many weapons."
Reply to bornyank1
rawagman
Ben, when I read Veeck as in Wreck last year, at least once every ten pages I found some gem that paralleled nicely with a current baseball (on the field or off) issue. I look forward to seeing more parallel studies put forward by you as you wade through one of the best baseball books of all time.
Reply to rawagman
bornyank1
Stay tuned for more later today!
Reply to bornyank1
rawagman
Oh, wow. I've got it queued up and can't wait to dig in to it tonight.
Reply to rawagman