Tonight in New York is the “not” heard round the world: the game Stephen Strasburg would have been pitching if the Nationals hadn’t shut him down ahead of schedule, due to problems “mentally concentrating” that the Nationals blame on the level of media attention to the team’s plans to shut him down.

The Nationals have a strong lead in the NL East, so they are unlikely to miss his performance in one game, or for the rest of the regular season, very much. The larger issue surrounding Strasburg is the impact of losing him for the postseason. When the Nationals instituted their plan for Strasburg at the beginning of the season, it made a lot of sense for a young team with slim hopes of making the playoffs to protect one of their most valuable (and most fragile) players from injury. With the Nationals heavily favored to make the playoffs, though, some Nationals fans are likely to be disappointed if their team’s ace isn’t available for a single game of the postseason.

Clearly, the Nationals know that Strasburg is a better pitcher than whomever they will replace him with in the playoff rotation, just as everyone else does. However, the public is at a disadvantage when discussing a pitcher’s condition, since teams simply know more about how he’s doing than fans and the media do. They have scouts, trainers, doctors, and even the player themselves to shed light on how the pitcher’s body is reacting to his workload.

It’s difficult for anyone not affiliated with a major-league team to get that sort of feedback on a player. The next-best thing we can do is look at the pitches themselves to see if we notice anything that we may be able to link back to the pitcher’s workload.

A look at the PITCHf/x data reveals that Strasburg’s four-seam fastball (his primary pitch) has been steadily declining in velocity over the course of the season. This graph is going to be relative to his average fastball speed for the season: 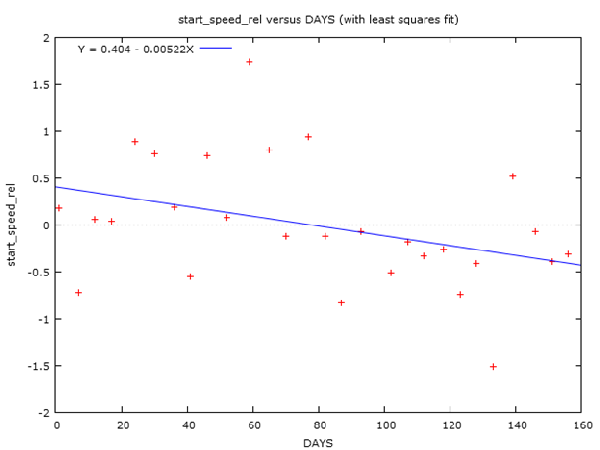 The data is noisy, but there’s a definite trend there: according to the best-fit line, Strasburg has lost nearly a mile per hour off his four-seam fastball since the beginning of the season. Knowing this by itself doesn’t tell us much of anything, without knowing about how other pitchers fare over the course of the season. Again, this is relative to the average fastballs of all pitchers: 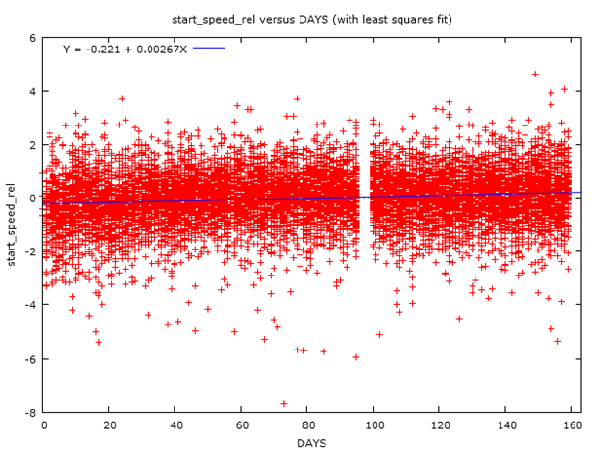 The effect we see here is much less pronounced, but most pitchers actually gain speed over the course of the season. This finding holds up if we restrict our observations to players with above-average fastballs (average speed greater than 93 mph), as well. And it also holds up if we restrict ourselves just to Nationals home games, suggesting that what we see in Strasburg is unlikely to be some systemic problem with velocity measurements in the PITCHf/x system.

So we know there was an unusual velocity loss in Strasburg’s case; what we don’t know is what the cause of that was. It is possible that this was due to a deliberate choice on the part of Strasburg. He may have been trying to ease off in order to help him pitch through the season longer. Or he may have been changing something else that reduced velocity as a side effect, perhaps in exchange for better command or better movement.

But the drop in velocity could also have been a sign of fatigue. It might not have been arm fatigue, necessarily—it could have been fatigue in his legs or lower core. Fatigue would not necessarily mean Strasburg was hurt, of course. But according to athletic trainer and Baseball Prospectus author Corey Dawkins, pitching through fatigue “at maximal effort” is the primary cause of pitching injuries. Fatigue could also have led to changes in delivery as Strasburg tried to compensate for its effects, which would have increased his risk of injury.

Now, we don’t know that Strasburg was fatigued, but we do know that the Nationals would have much more information to determine that than we do. What we can say is that we see something that may indicate fatigue, and that asking Strasburg to continue to pitch through that fatigue could have meant risking reinjuring him.

The Nationals are giving up some likelihood of short-term gain to safeguard Strasburg’s long-term health, which is a bizarrely forward-looking act in an industry so often concerned with the short term first. But the Nationals are a young team, and youth has its advantages when it comes to building up a run of sustained success; young teams are more likely to perform well in the future than older teams. If the Nationals have evidence that Strasburg is fatigued, that would seem to indicate that their concerns are quite prudent.

â€‹A version of this story originally appeared on ESPN Insider

You need to be logged in to comment. Login or Subscribe
LynchMob
Thanks ... interesting ...
Reply to LynchMob
Ivaagenes
Can we really conclude that most pitchers gain velocity? Unless I've misunderstood how the line in the second graph was fit, it just shows that it is more likely that you'll observe a faster fastball later in the year, not that any given pitcher gains velocity on their fastball as the year progresses. To answer that question I think you'd need a model in which a line is fit to each pitcher(like the first graph) and then investigate the group-level parameters (intercept, slope) using a hierarchical model. You can fit just such a model using Jags (In R if you like). John Kruschke hosts an R script called "SimpleLinearRegressionRepeatedJags" which will spit out a lot of nice graphs of the credible marginal posterior distributions for the group level and subject level parameters.

If you'd rather use Stan, a recently released free implementation of hamiltonian monte carlo (Jags uses Gibbs sampling instead), here's a way to do it:

Reply to Ivaagenes
bornyank1
Max Marchi got results similar to Colin's in 2009.
Reply to bornyank1
Ivaagenes
Thanks for the link. It looks like while Colin's graph shows fastball velocity relative to the average of all pitchers, Max's scales each pitch relative to the year average of the pitcher who threw the pitch. That does appear to take a step in the direction of a full-blown hierarchical model. Still you're left without being able to talk about group level parameters. Also Max's study broke down pitchers into three categories. It's at least clear that Strasburg did not have a group 3 pitcher type of year (a pitcher that gains velocity as the year goes on). But from Max's study, that's the minority pitcher type. It's just not clear to me that Strasburg's velocity profile was cause for concern. But than again as Colin mentions, we may know a lot less than the Nationals do.
Reply to Ivaagenes
beeker99
I'm awfully, awfully late to this, but why not look at what happened to the faster of all starting pitchers, not simply all pitchers, from the start of the season until now? I wonder if the relievers are skewing the data. Relievers generally throw harder, and as the season goes on, teams are much more likely to discard ineffective relievers in favor of more effective relievers, and to repeat the process as much as possible.