Dodgers closer Kenley Jansen hasn’t pitched since August 27th, when he suffered a recurrence of the irregular heartbeat that put him in the hospital last season. Jansen is taking blood thinners, though he may undergo a procedure called cardiac ablation over the offseason, which would allow him to go without the medication. He hopes to pitch again this month.

Jansen’s ailment is unusual, but he’s not the first player to pitch in the majors with a serious heart condition. His story reminded me of an anecdote from Veeck as in Wreck, the best baseball book on the planet. Rather than transcribing it, I'm pasting some screenshots from Google Books, because A) retyping this passage would’ve taken some time, and B) the first 150 pages or so are available for free. Go read them. You’ll want to read the rest.

Okay, enough prelude. Here’s the story of Russ Christopher, courtesy of Bill Veeck and Ed Linn. I’ll have some thoughts after the excerpt. 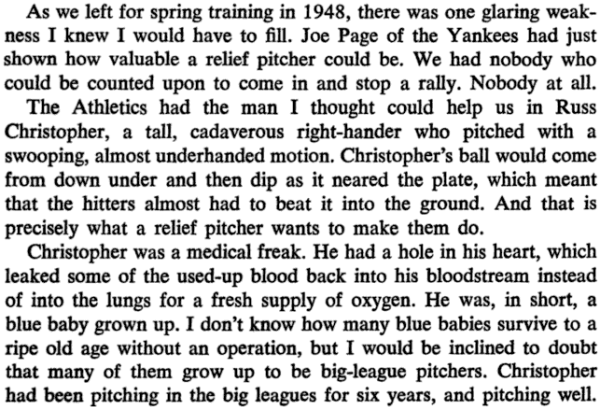 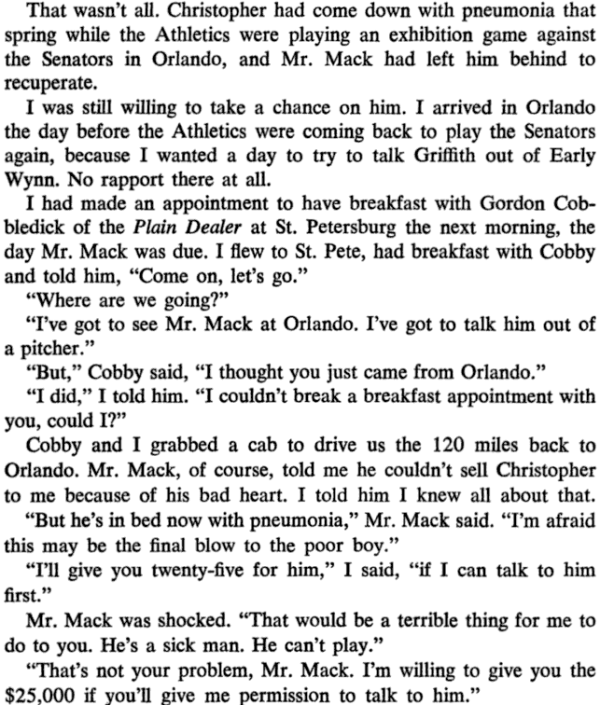 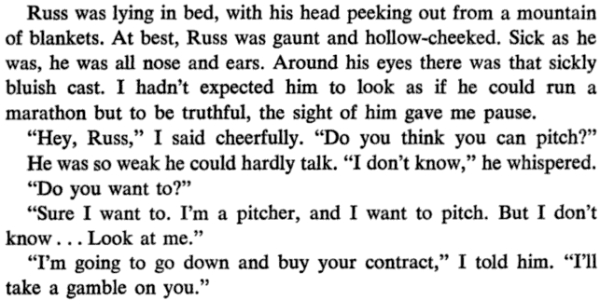 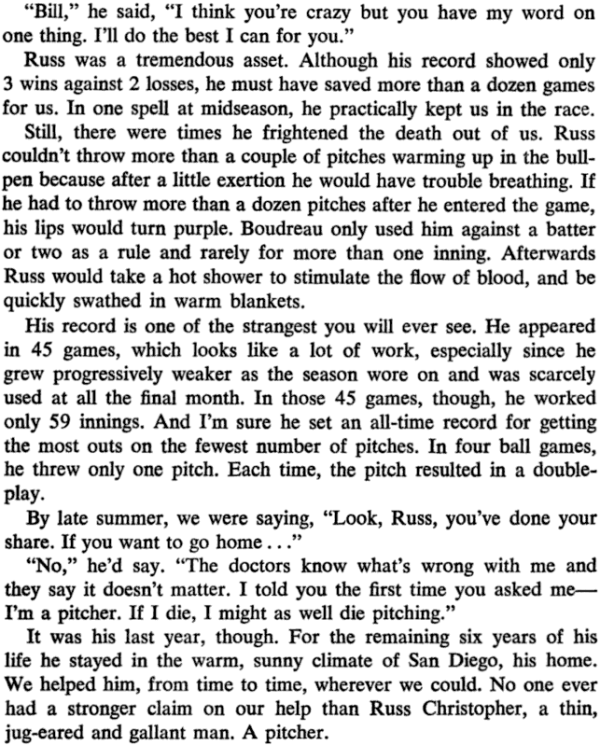 *They don’t make sportswriter names like “Gordon Cobbledick” anymore. Cobbledick was an accomplished journalist, but his greatest accomplishment may have been avoiding a less flattering nickname than “Cobby.”

*The Indians won the pennant by one game in 1948. They might not have beaten out Boston had Veeck not plucked Christopher out of bed.

* Christopher walked nearly twice as many batters as he struck out for the Indians that season. In 1948, this wasn’t that unusual—American League pitchers as a group walked more batters than they struck out. Still, even for the time, his peripherals weren’t anything special. Some of his success may have been BABIP-based—his BABIP was .246, well below the .283 league average—but I’d love to know what his groundball percentage was. And I wish we had the pitch-by-pitch data to confirm what Veeck wrote about his efficiency.

*Veeck wasn’t remembering quite right about Christopher’s workload down the stretch (he was writing 14 years later). He says Christopher “grew progressively weaker as the season wore on and was scarcely used at all the final month.” But Christopher pitched in eight games in August and eight games in September, the same number he appeared in in both May and June. The outings may have been a bit shorter at the end, but he did finish off both games of a double-header in mid-September. (He got the save in the first one, and the second ended in a tie.) He pitched 8 1/3 scoreless innings that month, although half of his outings came against the 59-94 Browns.

*They weren’t keeping track of these things then—Jerome Holtzman was 22 and still 11 years away from spawning the save stat—but Christopher led the AL with 17 saves in 1948.

*Want to how much relief pitcher usage has changed since 1948? Christopher averaged 1.31 innings per outing, the lowest total of any pitcher with at least 50 innings pitched that season. (Proto-closer Joe Page, whom Veeck cites as his inspiration for signing Christopher, averaged nearly 2 1/2 innings per relief outing in his 1947 All-Star season.) In 2012, only 11 relievers with at least 40 innings pitched have averaged more than that. So, the least-durable pitcher then—a guy whose “lips would turn purple” if he had to throw more than a dozen pitches at a time—pitched more innings per relief outing than almost anyone does today.

You need to be logged in to comment. Login or Subscribe
whanson
Great stuff!
Reply to whanson
drawbb
Tremendous profile, I dearly love these history-based pieces.
Reply to drawbb
bornyank1
Thanks! I just wrote another.
Reply to bornyank1