Beside pitch speed, pitch location, pitch spin, pitch movement, pitch type, count, batter, park, umpire, release point, etc., PITCHf/x also logs something called pitch-type confidence. Since the system is using algorithms to deduce what the pitch is based on speed, movement, and release point, it has to make some assumptions. If a pitcher throws only one type of fastball, and it is 10 mph faster than any other pitch he throws, and it is the only pitch that breaks to the pitcher’s glove side, the system can be pretty confident when it labels a 98-mph pitch a fastball.

But then there’s Yu Darvish. Of all the pitches Yu Darvish has thrown this year, 43 were give a confidence level of 50 percent or lower, and 506 were 80 or lower. Compare this to, say, Wandy Rodriguez, my go-to control group. He has thrown just one pitch with a confidence rating lower of 50 percent or lower, and 121 at 80 or lower. Or compare to (random pitcher) Stephen Strasburg: five below 50, 120 below 80. Strasburg has thrown 81 pitches that PITCHf/x was 100 percent confident about. Yu Darvish has thrown none.

None of this applies exactly to the experience of hitting against Yu Darvish, but maybe it does a little. Darvish throws a whole grip of pitches. The speeds on them vary to the point of overlapping with each other. They all seem to move a ton, so the movement is suggestive but not always conclusive. And so when he pitched against the Rays on Tuesday, striking out 10, the Rays’ broadcast team kept admitting: they didn’t really know what that pitch was. And, they would inevitably note, if it’s that hard to identify, imagine how hard it is to hit. That’s probably not sound logic, but it sounds good, and, also, yes, it is hard to hit.

So let’s say Darvish has two strikes on you. What do you look for? It depends on the situation, and it depends on how well Darvish has set you up. And if there’s one thing you could say about Darvish’s performance against the Rays, it is that he set them up very, very well.

Here are the three best pitches thrown this week.

Background, courtesy of the Rays' broadcast: 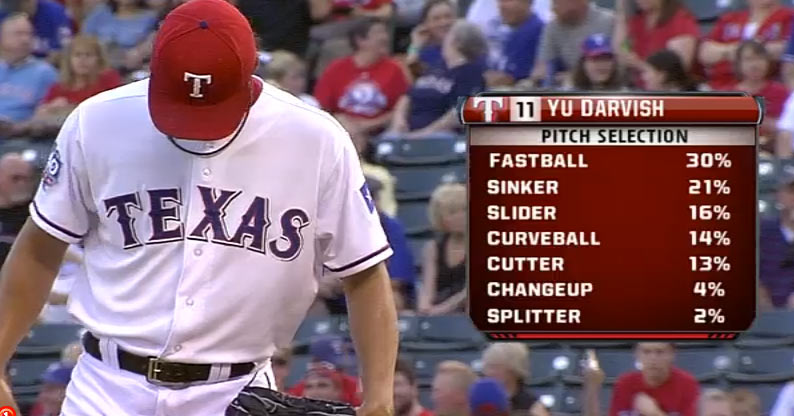 I think the changeup and splitter should actually be labeled as just one pitch, the splitter, which is what we'll assume for this piece. But it's also Darvish, so.

Immediate context: Upton laid down a sacrifice bunt on a high fastball in his first at-bat against Darvish. In the second at-bat, Darvish threw Upton four fastballs, one of them way high and the other three on the outer half. Upton fouled off the first pitch in the zone, whiffed on the second and took the third—in the low-outside corner of the zone—for strike three.

And follows it with a four-seamer near the called third strike of the previous at-bat, but taken this time for a ball. All seven pitches Upton has seen in this game are four-seamers, until this:

Sweetness me, that’s a pitch. I especially like how Upton does an impression of the pitch with his left foot.

Darvish then goes back to the four-seamer low and away, and while this one is 95—the hardest he has thrown to Upton today—it’s a little too far outside to get Upton to chase or to get the umpire to repeat his call from the second at-bat. So Upton has a 2-2 count.

B.J. Upton
Has seen: Nine pitches
Has seen: Eight four-seam fastballs, mostly away
Has seen: One curve, 69 mph out of the strike zone
Has: Looked lousy on all
Has not seen: Two-seamer, splitter, slider, cutter

If B.J. Upton looks for a fastball:
He will embarrass himself on a slider

If B.J. Upton looks for a slider:
He will take a fastball down the middle

If B.J. Upton looks for a splitter or two-seamer:
He will be caught in between: Too fast on a breaking pitch, too slow on a four-seamer

You are B.J. Upton. Your strategy is to look for:
1. A fastball away, with the somewhat similar cutter in the back of your mind
2. A slider, with enough of your weight back to fight off a slow curve if it comes
3. A two-seam under your hands
4. A splitter in the dirt
5. SHUUTO! HE THROWS A SHUUTO!

Background: Joyce hits righties well, and he controls the strike zone well, so Darvish isn’t a bad match-up for him. He can handle low pitches, which is where Darvish will keep almost anything under 90 mph. And despite being patient overall, he’s aggressive at pitches in the middle of the zone, and up in the zone.

Immediate context: Darvish faces Joyce in the first inning; he gave up a first-pitch hit to Desmond Jennings and a first-pitch bunt to Upton, both on four-seamers, so Joyce hasn’t seen much yet. Darvish throws a four-seamer low and away for ball one. Then he gets strike one on this:

So that’s the cutter. It’s right down the middle, but it evens the count. Darvish then throws the first off-speed pitch of the game:

Matt Joyce
Has seen: A four-seam fastball, a cutter, a curve.
Has not seen: A splitter, a slider, a two-seamer, a cutter or a curve out of the strike zone.

If Matt Joyce looks for a slider:
He probably will be able to lay off a slider, or drop his bat on it; or be slow on anything (four-seam, cutter) on his hands.

If Matt Joyce looks for something with movement away:
He will be slow on anything inside

If Matt Joyce remembers the curveball he just swung at:
He may wet the bed tonight

You are Matt Joyce. Your strategy is to look for:
1. A two-seamer or splitter away; go with it, or hope it stays over the plate.
2. A slider, which you will probably try to lay off because it’s going to hit your left knee
3. A four-seamer up, which you will swing at like it's Marty McFly on a hoverboard
4. A cutter on your hands, which you will nearly mistake for a four-seamer but recognize because you’re looking for it
5. A splitter in the dirt
6. SHUUTO! HE THROWS A SHUUTO!

Matt Joyce, what do you do?

In the third try, Darvish throws a first-pitch this:

Cutter, probably. Recorded as a fastball, but a bit slow for a four-seamer. Based on velocity and movement, I’m saying cutter. Then this:

It’s the 14th time Darvish has thrown that curveball today, but he has never thrown it in a two-strike count. So while it steals a strike and might disrupt Lobaton’s timing and is certainly a heck of a pitch, Lobaton can probably exclude it from his math now that he’s down 0-2.

Darvish then throws a true four-seam fastball, in the dirt and inside. So,

Jose Lobaton
Has seen: Seven pitches, mostly cutters, with one slow curveball
Has not seen: Slider, two-seamer, splitter, 94 mph up in the zone

If Jose Lobaton looks for a cutter, or a four-seam fastball, he will still be Jose Lobaton, so let’s get real here. If he looks for a slider, he’s not going to turn into Ben Zobrist or anything, let’s just call this one early. If he is focused on a two-seamer, Yu Darvish is going to just be better at pitching than Jose Lobaton is at hitting. And if he looks splitter, then he’s going to strike out on a splitter.

You are Jose Lobaton. What do you expect you will strike out on?
1. A cutter, probably. He just keeps throwing cutters, and you haven’t gotten a hit yet.
2. A splitter, probably. It has been his go-to strikeout pitch the third time through the order.
3. A slider, probably. It’s a pretty pitch, and he has barely thrown it today. He misses it.
4. A fastball. Why get crazy? Jose LOLbaton.
5. SHUUTO!!! HE THROWS A SHUUTO!!!

Jose Lobaton, what do you do?

The funny thing is, I was considering pitches for this feature, and before I settled on Yu Darvish I found I was collecting a lot of sliders from Darvish's previous start, against the Blue Jays. Sliders to righties, where the righties would chase pitches and miss by a foot or more. Could have filled an entire article with those sliders. Here I have shown you nine great Yu Darvish pitches, and none of them are sliders to righties. Yu Darvish does a lot of things.

I just wish he were even better.

You need to be logged in to comment. Login or Subscribe
Schere
#2 is probably also the splitter. It's very like #1, but Darvish misses his spot a bit. Soto sets up the same way in #1 and #2, different from #3.
Reply to Schere
TheArtfulDodger
I felt like #2 and #3 might have both been sliders, but I really have no idea. This article was phenomenal. The Lobaton paragraph really got me. Thanks Sam.
Reply to TheArtfulDodger
chabels
Terrific feature, especially the sequencing elements. It really helps expand our understanding of the challenges facing hitters, and how they adjust their approach.

And there's something awesome about watching hitters made to look foolish by pitchers.
Reply to chabels
yadenr
Love this feature and this version of it in particular. The context and set-up is great. Here's hoping that Darvish grows into the true ace he looks like at times like these, instead of the nibbling virtuoso he sometimes is.
Reply to yadenr
Klochner
Sam, did you happen to see Soto take off his glove to give a six-fingered sign at one point?

One of the better things I've seen this season.
Reply to Klochner