One of the most-used arguments in favor of extending the DH rule to the National League is that the sight of a pitcher flailing about with a bat in his hands every two or three innings isn’t anyone’s idea of competition at the highest levels. This argument can be countered in several ways.

One could be the following: pitchers aren’t much worse at hitting than some oversized sluggers are at circling the bases (notice how I avoided using the word “running”). So why not make baseball a bit more like football? You could have a defensive unit and an offensive one, plus the special teams (the runners). That way, we would always see the best performers in each aspect of the game.

I wouldn’t really want that to happen, at least not to Major League Baseball. But there is another counter-argument to the hapless batting pitcher argument that has been revolving in my head for a long time:

the pitcher doesn’t have to be a bad hitter. Many anti-DH types maintain that Babe Ruth himself is the best argument for abolishing the DH, as he would have never become one of the greatest hitters ever if the rule had been in place in the American League.

When this post appeared on The Book Blog, I had an idea. Could it be that pitchers unlearn how to hit?

Think about it. Many times we’ve read about great college pitching prospects who are employed at other positions on their non-pitching days and do some damage at the plate. Even the college baseball rules are somewhat skewed in favor of such double-threat players. In fact, in the NCAA, a player can be employed in a game as a pitcher-DH double entity so that when he is removed from the mound he can still hit for his reliever (but is not eligible to play any position on the field.)

In Minor League Baseball, pitchers hit only in Double-A and Triple-A, when both teams are NL affiliates (and, in the PCL, when both teams have agreed to it). If the player elects to enter professional baseball as a pitcher (or the team that drafts him decides he should), he could go without a plate appearance for years before advancing to those levels. Once he makes the majors with a National League team, he is expected to take regular turns at the plate.

The narrative that wasn’t
Tom Tango’s post, which led to an article by Julian Levine at Beyond the Boxscore, was about Stephen Strasburg, who at that time had a triple-slash batting line of .343/.400/.548. I thought I had a good narrative that, coupled with some number crunching, would have turned into a nice article.

My hypothesis was that pitchers who spend less time in the minors have less time to forget how to hit and therefore produce more at the plate when they reach the National League. The plan was to use Strasburg as the poster boy: he played briefly in the minors in 2010 before his hyped debut in the majors the same year, and so I would suggest that his rapid promotion allowed him to hold on to the hitting ability of his college days. The only trouble was that when I went looking for his college hitting stats, I discovered that he wasn’t used as a batter at San Diego State.

After the initial disappointment, I decided that the idea of comparing major-league hitting success to time spent in the minors might still have some merit, so I conducted some exploratory analysis. I’ll report the results I obtained below.

Hitting success by time in the minors
The first thing I needed was a definition of “time spent in the minors.” I decided to consider all the minor-league action that took place before a pitcher’s final rookie season in the majors.

Let me clarify this. According to MLB rules and regulations, “A player shall be considered a rookie unless, during a previous season or seasons, he has (a) exceeded 130 at-bats or 50 innings pitched in the Major Leagues; or (b) accumulated more than 45 days on the active roster of a Major League club or clubs during the period of 25-player limit (excluding time in the military service and time on the disabled list).”

Thus, one pitcher can play multiple seasons in the big leagues while maintaining his rookie status. For a pitcher who played his final “rookie status” season in 2005, I considered all his minor-league action up to year 2004 as his “time spent in the minors.”

Then I defined a time frame for measuring hitting success in the majors. I looked only at MLB stats compiled up to three years after the aforementioned final rookie season. (I did not want NL pitchers who re-learned how to hit to get into the way.) In the example above, I would consider seasons up to 2008.

Limiting the data set to players with at least 100 at-bats in the majors in the window specified above, I obtained the following chart, which shows the relationship between innings pitched in the minors and OPS in the first few years in the big leagues. 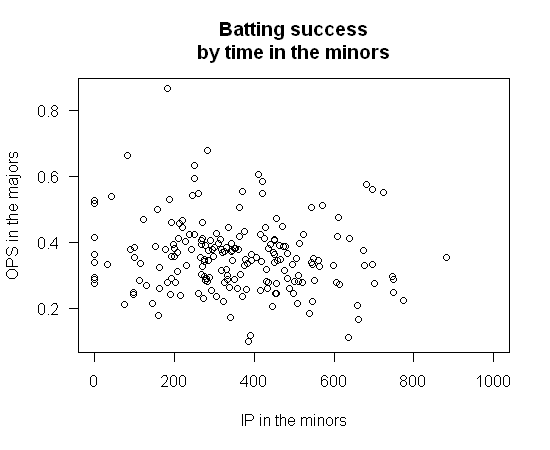 The chart appears to reveal a mild negative correlation, as the dots trend slightly downward. The Pearson’s correlation for this data set is -0.15. That’s certainly not a strong correlation, but it’s also not negligible. What’s more, it’s in the expected direction, according to the hypothesis.

Caveats and conclusions
The results don’t prove my point, but they don’t disprove it, either. However there is at least one big potential confounding effect.

A pitcher who spends a small amount of time in the minors is obviously a great pitching prospect to begin with and, likely, a very good overall athlete. Thus, the negative correlation between time spent in the minors and initial offensive production in the majors could be explained by the fact that the guys who reach the majors earlier are simply better hitters to begin with.

Checking on that is harder than it might seem at first, since college stats would need to undergo a massive process of normalization before they would be useful. The closest I got to addressing that question was to compare the OPS recorded as a hitter with the OPS allowed as a pitcher, both at the major-league level. I found a small (0.07) positive correlation, as opposed to the negative one I would have expected according to the “better athlete” hypothesis.

So what’s the takeaway? Is the equation “pitcher = bad hitter” a given?

There have been some exceptions to this rule even in recent years. Micah Owings is the circle in the upper left part of the chart above, Dontrelle Willis was a very good hitter, and Rick Ankiel was good enough with his bat that he was able to make it as an outfielder when he realized that he couldn’t make it in the majors as a pitcher.

Unfortunately, there seems to be a common trait in the above examples, as all of those good-hitting pitchers ended up not being good enough at pitching to have long careers. (However, there are others like Carlos Zambrano, who has been able to have a good career as a pitcher while remaining more than an adequate hitter.)

The best question might be the following: Is pitching today such a difficult task that it prevents a pitcher from preserving his batting abilities?

That might be the case. However, when some of you push for the expansion of the DH to the National League because of the embarrassing spectacle of pitchers in the batting box, try to imagine what would happen to position players at the plate if they were forced to play only defense for four years between their college years and their major-league debuts.

You need to be logged in to comment. Login or Subscribe
aaronbailey52
Strasburg didn't bat in college or the minors and then was able to produce that batting line over any sample size? That's amazing
Reply to aaronbailey52
swarmee
Re: Micah Owings, do you mean upper left part of the chart? There is no circle in the upper right.
Reply to swarmee
bornyank1
That makes more sense, thanks. Fixed.
Reply to bornyank1
Kreylix
I remain curious to see if the A's will use Sean Doolittle as a pinch-hitter; hasn't happened yet.
Reply to Kreylix
pizzacutter
Would a better variable be time elapsed. Figure that all pitchers stop hitting once they leave high school (age 18). Take the pitcher's age minus 18. I can't imagine that it's pitching extra innings that somehow eats away at the neurons that encode the muscle memory for hitting, but rather the simple passage of time and their not being renewed/tended to.
Reply to pizzacutter
maxtoki
I revolved between innings pitched and games played as a measure of time elapsed, while the better thing to do was obviously to use time elapsed.

Sometimes one misses the most obvious things.
Reply to maxtoki
NathanAderhold
I know that college stats are easy to accumulate on a large scale, but it might be interesting to look at the batting lines of the top pitchers taken in the most recent draft and try to predict who might have the most offensive success in the majors based on their college stats (if they batted).
Reply to NathanAderhold
marctacoma
"In Minor League Baseball, though, the DH rule (in its MLB form) is universal. If the player elects to enter professional baseball as a pitcher (or the team that drafts him decides he should), he could go without a plate appearance for years. "

This isn't true. In the Minors, pitchers bat if the game takes place between two national league affiliates, and if the game's in AA-AAA. Thus, Strasburg batted in the minors 12 times (and went 4-10 with a 2B). That's not a lot of plate appearances, but Strasburg didn't spend much time in the minors.

Matt Harvey had 17 PAs this year in AAA (and hit a HR), Trevor Bauer had 34 PAs so far between AA/AAA, Tyler Skaggs had 29, etc.
Reply to marctacoma
bornyank1
Fixed.
Reply to bornyank1
LynchMob
This still isn't right ...

In Minor League Baseball, the DH rule (in its MLB form) is in place only in Double-A and Triple-A, when both teams are NL affiliates (and, in the PCL, when both teams have agreed to let their pitchers hit).

I think you're trying to say that the DH rule is *not* in place in Double-A and Triple-A if/when it's a game between NL affiliates ... right?
Reply to LynchMob
bornyank1
Let's try that again. Now it's fixed.
Reply to bornyank1
LynchMob
Thanks!

Love the topic ... as an ardent NL fan, I love pitchers hitting ... am a huge fan of Owings + Marquis and every time a pitcher connects for a HR ...
Reply to LynchMob
LynchMob
And the phrase "final rookie season in the majors" makes my face krinkle ... but I understand the awkwardness of the concept ...
Reply to LynchMob
komcaast
Interesting stuff. One problem with your idea, though, is that the DH rule is NOT universal in the minors. Pitchers do hit in AAA and AA when both teams are NL affiliates: http://www.milb.com/milb/info/faq.jsp?mc=onfield#1.

Strasburg was 4 for 10 with a double in the minors in 2010: http://www.baseball-reference.com/minors/player.cgi?id=strasb001ste
Reply to komcaast
komcaast
And I'm too slow...
Reply to komcaast
maxtoki
Thank you all for the comments and pointing to inaccuracies.
Reply to maxtoki
dethwurm
Weird idea that occurs to me, bleary-eyed, at work after midnight: does a pitcher's hitting (really, contact) ability (say, measured by BA) correlate with his average fastball velocity? Both skills derive in significant part from being able to move one's arms really fast... :)
Reply to dethwurm