A good result is borne from confidence; or is it the inverse? I never can remember. The closest thing baseball has to a chicken-or-egg debate deals with confidence. Typically, confidence evaluations rest on two variables: how the player plays and how the player acts. In reality, one variable is king. A player can be mercurial, like Brett Lawrie, or stolid, like Mike Trout, and still register as confident. Provided their play is acceptable. Once a player slips into poor play, the confident label tends too as well. This is the spot where Ricky Romero finds himself.

The Blue Jays made Romero the first pitcher taken in the 2005 draft. Despite being a sixth-overall pick, scouts felt Romero’s ceiling was as a no. 3 starter. It was about stuff, not confidence. Romero had a three-pitch mix with the ability to command each, but his fastball was closer to average than plus. He reached Double-A in his second professional season. Those no. 3 starter projections looked optimistic during Romero’s days in Double-A. He spent parts of three seasons at the level before leaving for Triple-A with a career 4.90 ERA and 1.48 strikeout-to-walk ratio. That was in 2008.

After the season, David Laurila asked Dick Scott, then the Blue Jays director of player development, what had changed about Romero. Scott said, “I just think that he just got a lot more confidence.  Before, I don't think he had the confidence; he put a lot of pressure on himself as a no. 1 pick.” He continued, ”This year he really realized that it was time to just go and pitch the best he can, and our coaches did a great job with him. It has taken time, plus, I think we rushed him, like we do with a lot of guys. He just didn't respond.”

Eleven months later, Laurila asked Romero a question about a coach’s impact on his performance. Romero’s response ran 189 words, eight of which were variations of confidence, belief, and positive. It reads as if Scott gave Romero a page of buzzwords and bet him $50 he couldn’t use those words once per sentence; like a lesser version of Bennett Cerf’s bet with Theodor Geisel. The Jays’ plan to make Romero more confident seemed to work. He pitched well upon reaching the majors and hasn’t returned to the farm since. Yet.

On Tuesday night, Romero made his 119th big-league start. He faced the Tigers and walked eight batters, struck out none, and flashed body language like this throughout: 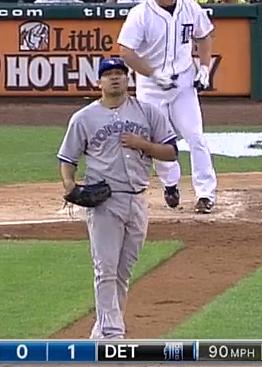 Romero’s deflated mannerisms are visible to anyone paying attention. Including his teammates, who are on the record as having noticed:

Tellingly, after the Kansas City Royals whacked Romero for eight runs on July 2, close friend [J.P. Arencibia] told sportsnet.ca that, “I just don’t see the fire, the Ricky that goes out there and wants to just, not literally, kill everybody that goes in the box.”

To Arencibia’s credit, he has told Romero similar things this season.

"You start questioning little things here and there, so I got back on my own side and said, ‘You’re here for a reason, just show it out there.’ J.P. (Arencibia) said it before the game after we got done warming up, ‘I want to see the guy that walks around with that confidence and that swag, I don’t want to see if you walk someone that you’re pushing the panic button a little bit.’ That’s what I went out and did, here it is, hit it, and whatever happens, happens."

What happened to Romero’s swagger? It’s a good question. Back in spring training, Romero had confidence. In fact, he appeared overconfident. Romero had reason to feel good. In 2011, Romero set a career-high in innings pitched en route to making his first All-Star team and finishing in the top-10 in American League Cy Young award voting. Romero would talk up his team, not himself on that spring day. He called the Jays an arrogant bunch, explaining how they no longer want to win—rather, they expect to win. Even back then the Jays seemingly had rotation questions to answer. Still, one could imagine the Jays, with a strong lineup and bullpen, overcoming their issues and coalescing behind Romero and his bold words.

It never happened, of course. Romero has yet to make a start this season without walking a batter. He’s walked five-plus batters twice as many times (six) as he’s walked one batter (three); and it’s been two months since the last time he walked just one. Romero has allowed 15 runs in four August starts. Last August, he allowed 10 runs in six starts. And the lopsided statistical comparisons go on, and on, and on.

Watch Romero’s walks on Tuesday night and some things become evident. Of the 32 pitches that went for balls, 25 were fastballs. Five of those fastballs either bounced or came close to bouncing.  Romero missed with his changeup and curveball, too. There were instances where a strike was seemingly the correct call, but Romero did not receive the benefit of the doubt because he missed his target by a plate width. When dealing with a pitcher with poor command and poor control, hoping for an injury is morbid. but at least it would explain the issues.  Romero insists that he is healthy.

Ricky Romero’s Balls on Walks, from 8/21

Examining a player at his extremes has benefits. So long as you inspect these streaks knowing your perspective is skewed due to selective sampling. You can see what his hottest and coldest stretches look like. You can try grasp the differences between the two, and what causes them. There are exceptions, however. When a player straddles too closely to an extreme, than examining that extreme will paint a fairly accurate portrait of the player involved.

In this case, watching Romero’s Tuesday start will give you an idea of his season-long problems. Sure, he doesn’t usually walk eight and fan none. But his control issues have persisted, as has the tendency to have one bad inning. If you walked away from Romero’s most recent game with the belief that he could not throw his fastball or changeup for strikes, then you would be right. These revelations turn up on his stat sheet as well; or, rather, his Brooks Baseball player card:

With the exception of a show-me cutter, Romero is throwing his main pitches for balls more often this season. His ability to throw strikes with his two-seamer and changeup have noticeably declined. For all the buzz about Romero’s fleeting confidence, perhaps the issue is his mechanics. If he’s unable to repeat his release point, that would help to explain why his changeup sails while his fastball swims to the plate. Perhaps the real reasoning is a combination of confidence and mechanical consistency. Romero is having to think about his mechanics on the mound; a proverbial kiss of death for big-league pitchers, who already have enough drama to deal with.

The days of a confident Romero might be behind us. Should Romero recapture success, however, watch as his confidence—or, at least, our opinion of his confidence—blooms again.

Sorry, I suppose I should've noted that.
Reply to RJAnderson
rawagman
Thanks for this - watching his train wreck of a season for the past 4.5 months, I have been dying for some true analysis of his problems. While inconclusive, this is much better than some of the pseudo-psychology I have read/heard thus far.
Reply to rawagman
mbodell
Time to send him down to A ball and hope he turns it around like Halladay did?
Reply to mbodell