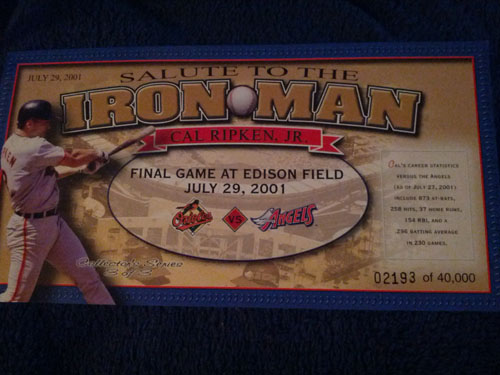 On June 19, 2001, Cal Ripken, Jr. announced that he would be retiring at the end of the year. At the time, the future Hall of Famer was batting a miserable .207/.240/.313 and looked well-past done. Look at those numbers again and think about what would be written today if Jeff Francoeur or Michael Young was having that kind of season. Brutal. From almost the moment he announced his plans for retirement, however, Ripken started hitting again. Over the next two months, from June 20 to August 21, he batted .350/.383/.531 with 8 home runs, upping his season line to an almost-respectable .274/.308/.416. Ripken's hot streak wouldn't last the full season, however. Over the final 35 games of the season and of his career, Ripken batted a god-awful .157/.192/.225, managing only 21 hits (15 singles) in his final 147 career plate appearances. The farewell tour of the American League for Cal, which generally featured special events and pregame ceremonies at practically every stadium, did not actually feature good baseball from the man it was celebrating. At least he signed a lot of autographs!

As sad as that may be, it's not particularly surprising. Forty-year-old ballplayers who have sense enough to realize that they're in their final season aren't usually at the top of their game any longer, meaning a quality season is very much the exception and not the rule. One of those exceptions is playing out right now in Atlanta. Back in March, before the season even started, Braves third-baseman and future Hall of Famer Chipper Jones announced that the 2012 season would be his final season in baseball. Since then, Jones has put up his best season in four years. His .313 batting average and .525 slugging percentage are the first times he's reached those particular round-numbers since 2008. In fact, on a per-at-bat basis, Jones' 2012 is almost equal to that 2008 season, when Jones accumulated a nearly-career best 6.7 WARP. True, Jones has seen much more limited play this season than ever before (only 78 games through mid-August), but that doesn't take away from what he has been able to do while on the field.

Having seen how much Jones still has in the tank, many have begun to question whether Chipper's decision to retire at the end of the season is the right one. Some even wonder if he will choose to renege on his March pronouncement and give it one more try in 2013. I certainly understand the sentiment, but I really hope Chipper decides to go out on top. Allow me to return to Ripken.

The Streak, for as great of a feat as it was, weighed down on Ripken in its later years. While the Orioles shortstop was a superb player in the 1980s, his post-1991 career was very pedestrian. The blame can't be completely placed on the Streak, of course, but it certainly didn't help his mid-30s production. In 1999, Ripken was playing without the stress of the Streak for the first time since 1982. He responded by having his best season in nearly 10 years. Despite going on the disabled list for all of August, Ripken managed to bat .340/.368/.584 with 18 home runs and 27 doubles in only 86 games. Those are very Jones-like numbers and, while Ripken was only 38 that year compared to Jones' 40, they came nearly 2,800 games into Ripken's career compared to Jones' 2,400. If Cal had decided to retire then, we never would have experienced the pain of that 2001 season.

Maybe age 38 was just too young to expect the Iron Man to retire, but it doesn't take much to see that that was the best moment for him to do so. Go out on a high note, if you will, and avoid showing the public something as embarrassing as a .422 OPS to end your career. Jones, who is two years older than Ripken was at the time and who has a much spottier health history, has very little chance of replicating his 2012 numbers (and a pretty big chance of following in Ripken's footsteps). I truly hope he takes the lesson of Cal Ripken to heart and sticks to his retirement plans.

And if Chipper is wondering what he'll do next year, I hear Florida has some good mammo bars.

Also re: Chipper Jones, they have been advertising this "commemmorative bat" with a plastic photo wrap listing his achievements. When he came up to bat against the Dodgers the other night my dad deadpanned "Why isn't he using his special bat?"
Reply to rocket
Oleoay
"On June 19, 2001, Cal Ripken, Jr. announced that he would be retiring at the end of the year. At the time, the future Hall of Famer was batting a miserable .207/.240/.313 and looked well-past done."


(Just kidding)
Reply to Oleoay
NYYanks826
If Cal retired before the 2001 season, we wouldn't have gotten to see that memorable ASG homer at Safeco Field!
Reply to NYYanks826
Oleoay
Or A-Rod showing some class and swapping positions so Ripken could play short
Reply to Oleoay