On Friday night, with the Marlins losing 5-4 to the Rockies in the top of the sixth and Josh Roenicke on the mound, Giancarlo Stanton hit an important home run. It wasn't important because it tied the game, although the Marlins would go on to win by one run. This was a matchup between two last-place teams, so the outcome was about as inconsequential as the outcomes of baseball games come. It was important because it looked like this:

We know Giancarlo Stanton hits long home runs. The average home run Stanton has hit this year has left the bat about four miles per hour faster, and traveled nearly 12 feet further, than the average NL home run. But this home run was different. This one beat out all the ones before it.

According to ESPN Home Run Tracker (formerly known as Hit Tracker), Stanton's homer, had its flight not been interrupted by the stands, would have traveled 494 feet by the time it returned to field level. That's nine feet farther than this Cameron Maybin homer from July, which had been the leader in the clubhouse for 2012. In fact, it's farther than every other home run hit in the regular season or playoffs since this Wladimir Balentien blast from October 2, 2009, which went 495. It's the fifth-longest homer hit since the start of the 2006 season, when Hit Tracker began keeping track.

I know what you're thinking: Stanton had help. The game was at Coors Field, and a Rockies pitcher was pitching. But although the altitude tacked on 12 feet, according to Home Run Tracker, the wind was blowing in, apparently pretty hard, which took away 13. The home run's "Standard Distance," which "factors out the influence of wind, temperature, and altitude," was 488 feet. Even at sea level, this would have been the longest home run hit this season. And while a Rockies pitcher was pitching, it was one of the hardest Rockies to homer off of. Roenicke entered the game having allowed only 0.6 home runs per nine innings this season, the 16th-lowest rate among pitchers with at least 70 innings. His career home run rates in both the majors and minors were also 0.6 per nine. Stanton had some factors in his favor, but the conditions definitely could've been better.

The clip of Stanton's homer has a strong supporting cast. Roenicke, who looks like a beaten man immediately after bat makes contact with curveball. The infielders, who crane their necks to watch the ball soar over their heads. The outfielders, who take a step or two toward the track to show that they totally tried to catch it. But the stars are Stanton, who doesn't seem to swing especially hard, and the ball itself, which forces our eyes to follow it. Remember where it went. It might be a while before we see one take a longer trip. 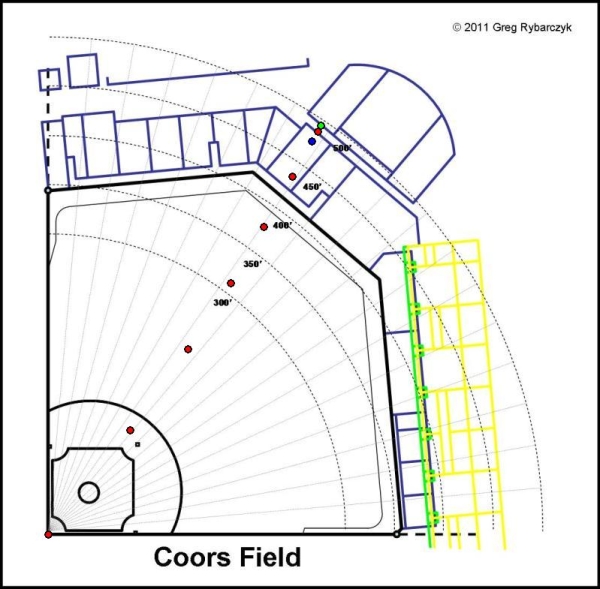 You need to be logged in to comment. Login or Subscribe
SGreenwell
I think the best reaction is that of Wilin Rosario, who's catching, who essentially and immediately says, "Oh ****!"
Reply to SGreenwell
onetimeforall
Two Wladimir Balentien references on BP in a week (referenced by Goldstein in talking about Gallo on Monday).
Reply to onetimeforall
I75Titans
Mark McGuire hit the facade of the Rockpile in the Homerun Hitting Contest before the All Star Game in Denver in 1998, advertised as a 505 ft. shot. That's right behind Stanton's mammoth homer. But that's easily the longest homer I have seen in 17 season of projectile-watching at Coors Field.
Reply to I75Titans
PunDeck
Giancarlo Stanton #Strong
Reply to PunDeck
ThreeSix
but does it really count against Rockies pitching?
Reply to ThreeSix
EricMeeker
Tommy Hutton on the Giancarlo Stanton HR: "I think he figured out that(shortarm) delivery of Josh Roenicke quite well." LOL
Reply to EricMeeker