Clay Buchholz has added a splitter this year to go with his well-known (and devastating) changeup. We first noticed this back when he was throwing one or two per game, but now it’s not unusual to see him throw a nice cluster of splitters in each start. A comparison between his pre-splitter and post-splitter pitch graphs is shown below: 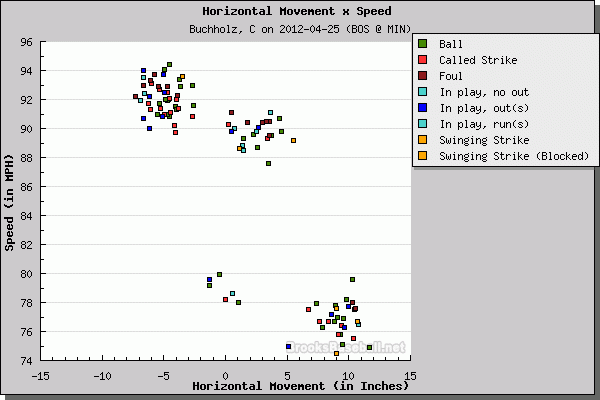 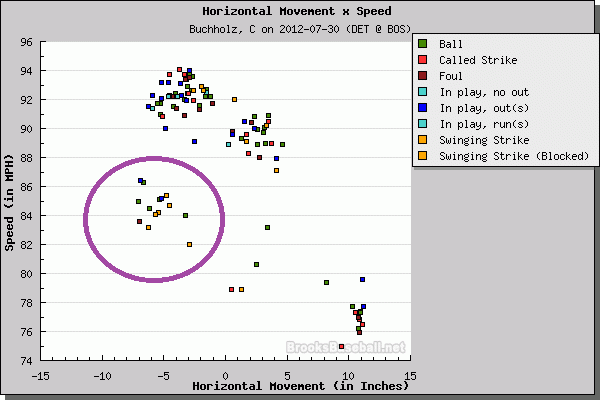 We’re now 66 pitches into the Clay Buchholz splitter experiment. How is it working out?

The most sensible thing to compare it to is the changeup, his other off-speed pitch. The two are virtually equally effective at generating groundballs (51.4 percent GB/BIP for the change, 50.0 percent for the split) or giving up line drives (16.2 percent change, 16.7 percent split).

The two major differences: swings, and swings and misses (whiffs).

Bottom line: if we had to evaluate the Clay Buchholz splitter experiment after only 66 pitches, it’s hard to say that the new pitch has been much more effective than his changeup. But in order to know for sure, more incisive analysis has to be done on his pre-split vs. post-split performance with other pitches.

Pitch Tags pulled from the PITCH INFO database. All information in this post can be viewed on Clay Buchholz’s player card on BrooksBaseball.net.

You need to be logged in to comment. Login or Subscribe
harderj
Jim Palmer or the other Jim on the Orioles' broadcast was referring to Buchholz having developed a cutter that he was falling in love with. Is a splitter similar enough to a cut fastball (or vice versa) that he would mistake it as such?
Reply to harderj
brooksbaseball
Buchholz did develop a cutter in the last few seasons that he has fallen in love with, but, it is different than the splitter he developed in the middle of this season.

To answer your question - no, it is not similar enough that he would have made the mistake. He was almost certainly commenting on the other developing pitch.
Reply to brooksbaseball
brooksbaseball
Maybe a complete writeup of Buchholz is in order, given the extreme additions to his repertoire =)
Reply to brooksbaseball
ericmvan
The thing about the splitter and the changeup is that ordinarily the two pitches behave the same, so that pitchers throw one or the other. There were only three MLB starters last year who threw both: Freddy Garcia and Brad Penny had splitters that broke more vertically than most and hence resembled their four-seamers, and used them in tandem with conventional changes that had the usual run in on RHB; while Tim Hudson's change was a bit like Buchholz's, with less armside run than usual (intermediate between his two- and four-seamer, though), so he was able to pair it with a splitter that had a lot of run.

But none of these guys had a velocity separation between the two pitches of more than about 1 MPH, which is to say, negligible.

Buchholz is throwing an unusually slow change with (even more unusually) even less armside run than his 4-seamer, and a somewhat hard splitter with good, typical run in. There's no velocity overlap at all between the pitches. I haven't gone back to see if anyone else has done this in the pitch/fx era, but I think it's fair to say that, for hitters, it's something many or most have never had to deal with.

The pitches ought to be easy to confuse, so the key question may be whether the splitter is making the change even more effective.