I write this on Wednesday evening. It is mid-August. The Ides of August, even, though you're reading this the day after. The Oakland Athletics are 61-55, counting the Wednesday loss to the Royals. The last time the A's had a record this good this late was 2006, when they won the AL West behind Frank Thomas's bat and then went 3–4 in the playoffs—three wins against the Twins and four losses to the Tigers.

They're not looking at the division crown this year. They were up 5 1/2 games in the Short Stack in 2006, and they're down six now. Six games doesn't sound like a lot when there are 46 still to play, especially with seven of those 46 against the first-place Rangers. But it is a lot. The Rangers are a better team than the A's, so those games remaining are more likely to bury the Green & Gold than they are to become their salvation. This is why Oakland is only given a 1 percent chance at winning the division in the current iteration of our Playoff Odds. (Current as of my writing, anyway, which doesn't incorporate the Wednesday games yet, though I'll eat my hat with mustard if that figure differs much as you're reading this.)
No, the wild card, that's the prize. (Such as it is, anyway. You can call it what you want, but I ain't calling them "the playoffs" unless it's a multi-game series.) The A's stand a game back of Detroit and 1 1/2 back of Tampa and Baltimore. There are three games remaining with each of those teams as well. From here, there are some things that would be easy to do: I could tell you why the A's won't make the playoffs or I could tell you how the A's can back their way in (Miguel Cabrera gets hurt, the Rays slump, whatever). The first thing is boring because it's probably true and the second thing is depressing because playing "anything could happen" with negatives is morbid. It carries a whiff of ill wishes. It invites karmic whiplash. We don't want that.
Instead, let's muse on how Oakland can find itself playing nationally televised October baseball, even if for just one game. The briefest of recaps of how the team got to this place it's in will be instructive, so: Yoenis Cespedes (.321 TAv, 2.7 WARP), Josh Reddick (.293 TAv, 2.5 WARP), and Chris Carter (.348 TAv, 1.1 WARP in just 128 PA) are the flashy individuals; a 40–30 record in games won by three runs or fewer is the suspicious team-standings stat (or the sign of a good bullpen and tactical manager?); and the fifth-best rate of turning batted balls into outs is the indication that Billy Beane is still on that New Moneyball grind.
***
By the way, do you want to know how Carter is putting up a .348 TAv? Here's one reason: 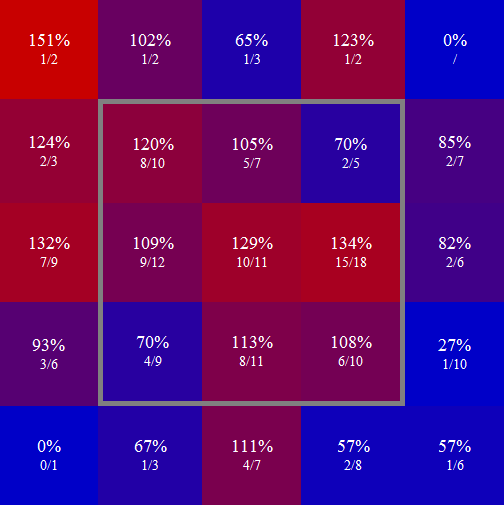 You need to be logged in to comment. Login or Subscribe
delorean
Had you titled this piece "A Love Letter to Chris Carter," I would have read it much sooner.

Next time don't bury the lede. Especially when it's about my man Chris.
Reply to delorean
jsherman
Assuming Carter to hit like Miggy seems... Unlikely.
Reply to jsherman
rawagman
"just bear with me, because for right now, I'm going to wave my hands by typing about how I'm waving my hands and by the time you get to the end of this sentence, you'll have forgotten whatever objection you were about to make."
Written like a lawyer...
Reply to rawagman
bpelow
Good stuff
Reply to bpelow
abcjr2
Younis Cespedes OPS per month, April through August: .762, .534, 1.106, .961, .810. Pre ASB - 198 AB, .791, post ASB -- 126 AB, 1.102.

If he stays healthy -- a big if -- they are a different team down the stretch than they are without him.

Norris and Weeks hitting better, as well, could give them some of the boost you are looking for.
Reply to abcjr2