One way to look at how a pitcher attacks hitters is to look at what the pitcher throws in two-strike counts. In two-strike counts, pitchers often try to put hitters away with a breaking ball, induce weak contact with a sinker, overpower hitters with an extra-hard fastball, or throw a changeup with a bit of extra screw action.

I hadn’t seen Yu Darvish pitch in quite some time, but since he started against my Boston Red Sox earlier this week, I once again got a first-hand look. How different he seemed from the pitcher I saw earlier in the season!

Commentary on Darvish has focused on how he has devolved into a kind of nibbling pseudo-Matsuzaka rather than a power pitcher who attacks hitters in the zone. I went to the data to look at how his approach vs. two-strike hitters has changed over the course of the season.

The first plot shows what kind of fastball Darvish has been throwing with two strikes. You can see a very clear difference between the months of April and May and the months of June, July, and August. 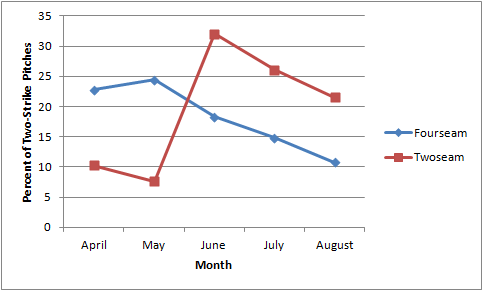 I also looked at the kind of breaking pitches Darvish is throwing with two strikes. 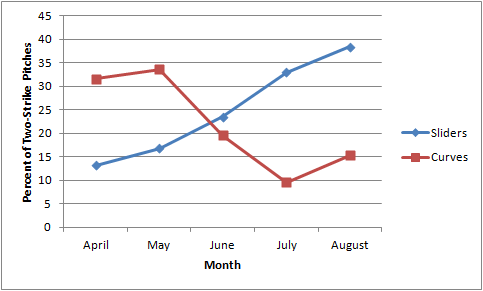 Immediately, you can see a very obvious trend: the slider gradually has become his favorite two-strike weapon, approaching nearly 40% of his two-strike pitches. The curve, which was an early favorite (to compliment the four-seam fastball) has gradually tailed off and is now thrown only 15% of the time. Interestingly, there has been no obvious change in effectiveness that might warrant these changes in breaking ball usage: the two pitches have not gained or lost an appreciable percentage of whiffs/swing.

It is also worth noting that Darvish throws “two” curveball variants—a hard one and a softer one. In his August starts, his two-strike curveballs have lost almost 5.5 mph and gained over 6 inches of vertical drop compared to his earlier starts. So, the uptick in curveballs toward the end of that plot may indicate an increased propensity to throw the softer curve with two strikes.

Conclusion: Darvish is clearly approaching hitters differently with two strikes now than he was earlier in the season, which indicates he’s trying to get outs a different way.

Pitch Tags compiled from the PITCH INFO LLC database. I would like to thank Harry Pavlidis for comments on an earlier draft of this article.

You need to be logged in to comment. Login or Subscribe
onetimeforall
I'd be interested to see a second conclusion: is Darvish changing the way he attacks hitters with two strikes with good reason? Are his two-seam fastball and slider the superior pitches in terms of effectiveness over the four-seam fastball and curveball? I would say yes to the slider, but am not sure about the fastball.
Reply to onetimeforall