We know that catchers are late to bloom and early to wither.  We know this because of Nate Silver’s work on aging curves from nearly eight years ago. Part of the late peak, Silver proposed, stemmed from teams’ reluctance to play young catchers. Had Silver attempted to chart the perceived upside of a catcher, he would have done so in a scientific way. The chart below is decidedly less scientific, but reaches the same likely conclusion with fewer headaches and deceased Excel spreadsheets. 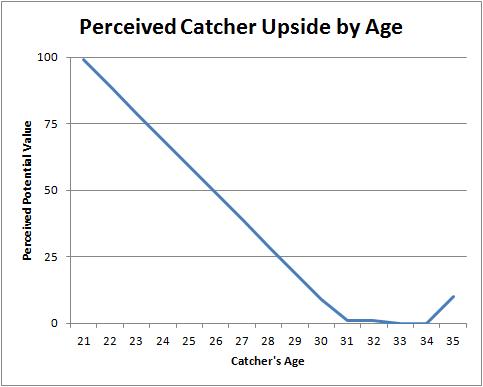 There you have undeniable evidence about how we think about a catcher’s upside. Young catchers, those in their young 20s, are exciting. They could blossom into franchise bedrocks. This 19-year-old Venezuelan prospect right here could become the next Yadier Molina. Young catchers are romantic. Seven-to-10 years later, those once-engrossing backstops lose their charm. Now they have more mileage than pizzazz. There is a slight dead-cat bounce in the mid-30s, stemming from the potential for Sal Fasano-inspired facial hair.

You couldn’t blame the Seattle fans who yawned when their team acquired John Jaso last November. Two months earlier, Jaso celebrated his 28th birthday. He came to the Mariners with nearly 700 big-league plate appearances to his name, and a low-beta skill set. Jaso lives to make contact, to walk, to wow onlookers with occasional exhibits of power potential, and to drive everyone bonkers with poorly timed passed balls. So long as he hit, however, the Mariners would play him. We knew as much at the time.

The Mariners then acquired Jesus Montero and Jaso’s future dimmed. It didn’t help that Eric Wedge disliked Jaso’s defense. This would lead to a failed spring audition at first base and an early season burying on the bench. When Jaso got his chance, he hit. And he hit. And he hasn’t stopped hitting. To date, Jaso is hitting at an unanticipated pace.

Jaso entered Sunday with a .286/.389/.469 slash line—numbers good enough to mark career-highs across the board. His five home runs to date match his career best, and he reached the total more than 30 plate appearance faster than he previously had. Jaso is closing in on setting new benchmarks in other offensive categories, as well, including doubles and triples. Even Jaso’s highs in less traditional stats are in danger of falling. His .183 Isolated Power is 53 points superior to his 2011 tally. In fact, Jaso last had an ISO over .180 for an entire season in 2005, as a 21-year-old.

Nearly every metric designed to measure power production is trending upward for Jaso. These aren’t false positives, either. There is reason to think Jaso might be tapping into more of his power potential than before. It starts with a new batting stance. Jaso, who used to crouch, is now upright. His feet are not square with the plate; rather, his front foot strays toward the back corner of the box, while his back foot flirts with being outside of the box. Further up the body, Jaso’s hands are now higher and closer to his torso. 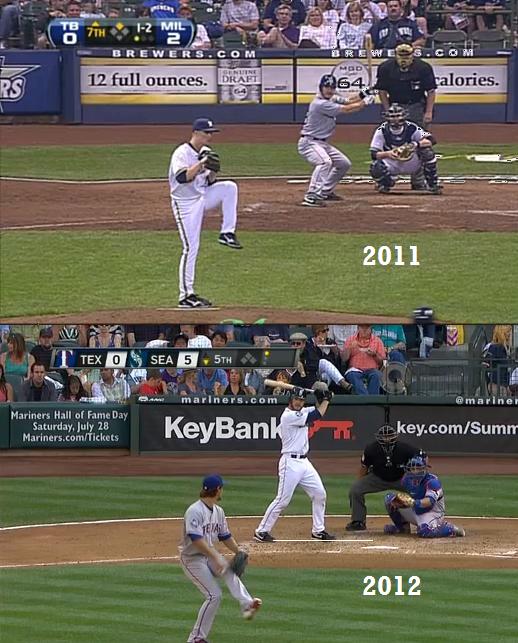 The changes have succeeded if they were made to increase his power production. At the same time, Jaso is making contact less often than before. His contact rate is down from 88 percent to 82 percent this season. Unsurprisingly, Jaso is striking out more often as a result. Trading contact for power or vice versa is a delicate swap; one best weighed on a player-by-player basis. It seems Jaso is aiming for more power as his aggressiveness has turned up. He’s swinging at a career-high 22 percent of first pitches seen, and is more eager than before to swing at a fastball:

Jaso’s transformation harkens back to what Ben Lindbergh wrote about Gregg Zaun and Jeff Mathis. Zaun believed a change in scenery and instruction would help Mathis harness his offensive potential. Jaso benefitted in a similar sense. The Mariners seemingly saw something in Jaso’s game they liked, and had a fix in mind. Seattle took a gamble in tweaking his mechanics because success is never guaranteed in these instances. It’s worked out so far. Just as the Jays’ addition of Mathis has worked out, just like the Rays with Fernando Rodney, and numerous other players.

These moves cast new light on transactions where a team signs a downtrodden veteran. Take Casey Kotchman for instance. Although his performances rarely are worth the cost of experimentation, his offensive skill set isn’t too different from Jaso. Every now and again, Kotchman will rear up and unleash on a baseball; causing everyone to wonder why he doesn’t do it more often. Is it possible that all of Kotchman’s teams see those glimpses and sign him with confidence they could be the one to turn him into a power source?

Maybe, maybe not. Many of these experiments fail. When one does succeed, it reminds you of how elusive baseball is. Even the players you think you know can turn into someone else in the right situation.

You need to be logged in to comment. Login or Subscribe
migueljsteele
Great read. I love that the analysis had the visual and strong, well-interpreted data to go alongside it.
Reply to migueljsteele
nolansdad
As a Mariners fan, I knew that Jaso had changed his stance, but those two visuals are drastic. Good for him and good for the Mariners for seeing the value and making a drastic change like that.
Reply to nolansdad