Today marks the 19th anniversary of one of the most memorable on-field fights in recent baseball history. 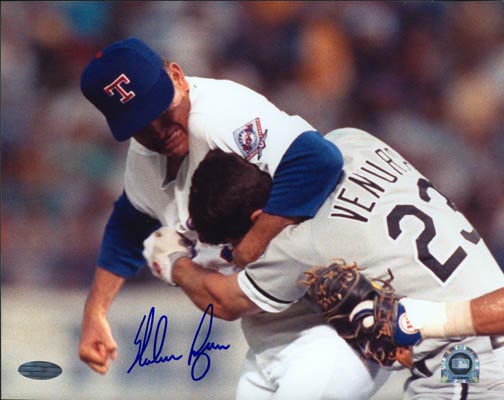 On August 4, 1993, 46-year-old strikeout king Nolan Ryan hit 26-year-old Robin Ventura in the arm with an inside fastball. Ventura stepped away from the plate for a moment, seemingly on his way to first base, before throwing his bat down and charging the mound. He then promptly got his butt whooped by the 20-year-his-senior Texan.

Or did he? Recently, an enterprising White Sox fan compiled a Youtube video that argues in Ventura's favor.

Judging by the "Likes" and "Dislikes" on the Youtube page itself, it's pretty clear what most viewers (or maybe just those from Texas who were linked to the video) think. What say you?

You need to be logged in to comment. Login or Subscribe
cjgeisler
Sorry, but Ryan still takes the bout on my scorecard.
Reply to cjgeisler
mhmosher
Just my opinion, but it seems like this fight has taken on legendary status. Its turned Nolan Ryan into a 45-year-old MMA fighter. No doubt, Ryan fed Ventura some good shots on the mound but I'm not sure that wasn't a more even fight then people "remember."

Besides all baseball fights are similar in that they never get drawn out very long. They are almost always broken up fairly quickly.
Reply to mhmosher
JimmyJack
The pile is pushing Ryan more than Ventura. It is nice to see this from a different angle.

Robin fighting back from his ankle injury is all the "he's not a quitter/he's a winner" stuff I need.
Reply to JimmyJack
HonusCobb
Proud of my manager! Thanks for challenging my assumptions Youtube guy.
Reply to HonusCobb
eighteen
Ryan could've ripped Ventura's head right off if he'd wanted. Instead, he decided to only make Ventura look very, very foolish.
Reply to eighteen
mhmosher
This is exactly what I mean. Nolan Ryan has evolved into a cross between the Incredible Hulk and Chuck Liddell.
Reply to mhmosher
Chucko
Well, Amazin, I guess you've never seen the Adamantium Mk. 1 Trench Knife tattooed over Ryan's sternum.
Reply to Chucko
jnossal
Oh, c'mon. Ventura never lands a punch.

That's what was so funny about it, old guy Nolan doesn't try to run or dodge, he calmly steps down off the mound, bulldogs Ventura like some kind of frisky calf and proceeds to land a flurry of uppercuts on the helpless Robin. As I recall, and you can't see it well here, Ryan landed those punches to the top of Ventura's head, not his chin, hence the added insult of being on the receiving end of the Noogie Express. The cavalry shows up, pushes the combatants across the infield and Ventura gets loose enough to wrap his arm around Ryan's collarbone. Only in Chicago could that be called a victory.

One more reason to justify my decades-long dislike of White Sox fans. And where was the Hawk Harrelson disclaimer/warning? Granted, a White Sox homer put the video together, so no excuse for my not having seen that one coming.
Reply to jnossal