I got responses from Jay, TCM, Ben, R.J., Colin, Brad Ankrom, Woj and alum Marc Normandin. Rather than embarrass any particular one, I'll just list their answers, unidentified:

First off, both had facial hair. Both were perhaps most famous for facial hair. Below, you'll see … one of them on the left and the other on the right. 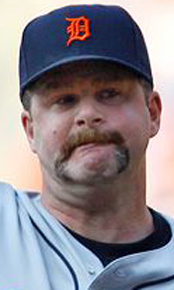 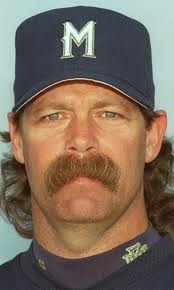 (Note: While saving photos for this, I actually still could not name the players, as I looked at them, after reading all of these and immediately after searching for each player's photo. Which is why one of these photos is named "Tigers".)

is it Doug was on Detroit?

You need to be logged in to comment. Login or Subscribe
Schere
on August 21, 1997 they appeared in the same game. Doug threw two scoreless, but Todd got the save.

http://www.baseball-reference.com/boxes/MIL/MIL199708210.shtml
Reply to Schere
lgranillo
Was Todd Jones "Col. Sanders", with the giant, bleached goatee? That's my vaguest recollection of him.

Doug Jones had 1) a sweet mustache 2) a 1989 Topps "Record Breakers" card (for 15 consecutive saves!!) and 3) had a super sweet Score Dream Team card with a "flaming" baseball: http://bit.ly/DougJonesFlame
Reply to lgranillo
bobbygrace
They are the parthenogenetic sons of Barry Jones.
Reply to bobbygrace
Oleoay
Doug Jones had a mullet. Todd Jones was too homophobic for that.
Reply to Oleoay
doctawojo
Doug finished his career with the A's, so I remember his slowball. That's the only way I can keep them apart.
Reply to doctawojo
plincoln
I once saw Doug strike out 14 batters in a game during a brief tryout as a starter. It seemed significant at the time. It wasn't.
Reply to plincoln