As anyone who grew up in the San Joaquin Valley can tell you, William Saroyan was a celebrated Depression-era author and playwright from Fresno, California. In 1940, Saroyan won the Pulitzer Prize for his play "The Time of Your Life." Three years later, the Mickey Rooney film "The Human Comedy" netted Saroyan an Academy Award for "Best Story" (essentially "Best Original Screenplay") despite massive changes from the studio. In fact, Saroyan was fired from the film after he turned in his first draft and so, to counter a movie he didn't agree with, he hurriedly wrote and published his version of the story as a novel under the same name. His book would later lead to a successful off-Broadway musical forty years later.

Saroyan might not receive the same kind of accolades as his contemporaries like John Steinbeck anymore (outside of Fresno-area schools, at least), but he was a talented writer who was very skilled at capturing the everyday life of his rural upbringing. In the post-war world, however, he was criticized for being too idealistic and sentimental in his writings.

William Saroyan was also a baseball fan. That sentimentality, while helpful in winning Pulitzers and Oscars, kept him firmly in the anti-stats crowd. In response to an August 2, 1954, article by Branch Rickey called "Goodby to Some Old Baseball Ideas", the playwright wrote this letter to LIFE magazine: 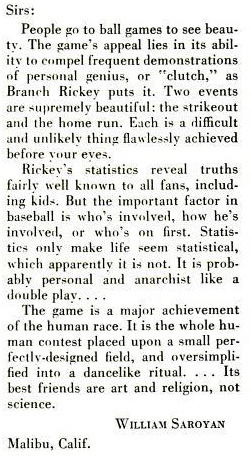 People go to ball games to see beauty. The game's appeal lies in its ability to compel frequent demonstrations of personal genius, or "clutch", as Branch Rickey puts it. Two events are supremely beautiful: the strikeout and the home run. Each is a difficult and unlikely thing flawlessly achieved before your eyes.

Rickey's statistics reveal truths fairly well known to all fans, including kids. But the important factor in baseball is who's involved, how he's involved, or who's on first. Statistics only make life seem statistical, which apparently it is not. It is probably personal and anarchist like a double play…

The game is a major achievement of the human race. It is the whole human contest placed upon a small perfectly-designed field, and oversimplified into a dancelike ritual… Its best friends are art and religion, not science.

"Art and religion, not science…" While I certainly disagree with my fellow Fresnan's opinions on "Rickey's statistics", that last paragraph of his letter is one of the best descriptions of baseball I've ever heard. "…The whole human contest placed upon a small perfectly-designed field…" Please, keep going, Mr. Saroyan.

You need to be logged in to comment. Login or Subscribe
eighteen
Whatever Saroyan's other virtues (and I don't doubt they are legion), his letter is utter nonsense.
Reply to eighteen
drawbb
No doubt he was the unknown sire of Heyman, Chass, Morgan, and the other mindless hordes from the Flat Earth Society.
Reply to drawbb
lgranillo
I don't know. I wouldn't say that at all. This was a nearly 50-yr old man writing about advanced stats in baseball back in 1954. Too many people today don't have even half the outlook on baseball Saroyan shows in his letter. The pretty language stands out, but the "baseball is a beautiful, organic game" argument, while dated (though much less so 60 yrs ago), isn't horrific.
Reply to lgranillo
sgturner65
As a Fresnan, can you connect William Saroyan to The Chipmunks?
Reply to sgturner65
lgranillo
Someone mentioned it on twitter (he's related to the creator somehow). Now I'm busy trying to remember if I knew that at some point growing up...
Reply to lgranillo
sgturner65
David Seville was the creator of The Chipmunks as well as the song "The Witch Doctor." His real name was Ross Bagdasarian.

He was Saroyan's cousin and also appeared in "Rear window" as the piano playing neighbor.
Reply to sgturner65
jrfukudome
Awesome, Larry. Thanks.
Reply to jrfukudome