The Royals have banned fraternization with opponents during the game, and Craig Calcaterra puts two and two together:

Maybe there’s more to this story than meets the eye, but what’s meeting the eye here seems pretty dumb: Royals announcer Rex Hudler has made it his personal mission to stop Royals players from being friendly with opposing players during games, so Ned Yost has put a stop to it.

Notably, this is not the first time Rex Hudler has seen the integrity of competition threatened by socialization. This is from 1992: 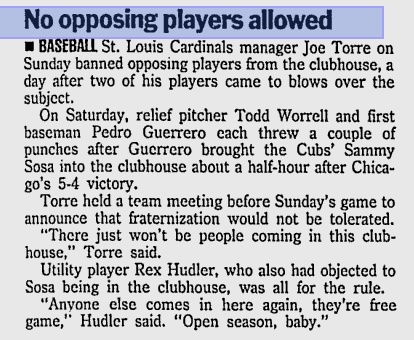 Rex Hudler, so far as I can tell from personal experiences, is a peach in real life, but I've never been wearing the opposing team's colors, either.

You need to be logged in to comment. Login or Subscribe
gdragon1977
I can understand not allowing members of the opposing team in your clubhouse. I'm less understanding of "open season" as an appropriate way to deal with it.
Reply to gdragon1977
seabass77
I teach high school and Rex's view on this reminds me a lot of how sixteen year-olds see the world. Sometimes the way baseball players see things can be so childish. What if opposing players are brothers?
Reply to seabass77
bornyank1
Hey, brothers fought on opposite sides in the Civil War. Royals vs. Indians in late July is a conflict on a similar scale.
Reply to bornyank1
zasxcdfv
If I could Ben's response, I would.
Reply to zasxcdfv
dethwurm
How much wood could a wood chuck if a wood chuck could wood?
Reply to dethwurm
Oleoay
I thought the Royals themselves threatened the integrity of competition.

All kidding aside, I like that little leaguers shake hands after the game and think MLBers should do so as well if they are role models.

As I recall, LaRussa got into a tiff two or so years ago about fraternization too.
Reply to Oleoay
kcboomer
You guys must all be rather new to the game. "Back in the Day" non-fraternization was the absolute standard of conduct with only minor relaxations of the code during all-star games. Guys were dead serious about wanting to beat the other guy and they didn't see how being friendly with their opponents furthered that goal.

Anymore with guaranteed contracts and the general weakening of social standards the old "non-fraternization" mentality is all but gone. Heck you watch games today and you see base runners yucking it up with the infielders.

Don't know which approach is the right way, but as is often the case a BP writer mocks someone for a standard of conduct they either disagree with or doesn't understand.
Reply to kcboomer
jedjethro
It's called an opinion piece. You must be rather new to the concepts of writing and commentary.
Reply to jedjethro
Oleoay
We're well aware that "Back in the Day", players sharpened their spikes, got in fistfights with umpires and refused to be on the field with African American players.

I don't think people are unaware that this is the mindset of the clubhouse. They're just lamenting that players haven't matured all that much.
Reply to Oleoay
hotstatrat
Bingo!
Reply to hotstatrat