Johnny Cueto is attempting to make history this season. If Cueto’s ERA remains static or improves, he would become the fourth starter* to lower his ERA in four straight seasons, joining Joe Benz, Joe Genewich, and Mudcat Grant. Accolades have been hard to come by for Cueto. His innings totals have left him out in the cold from making an All-Star appearance or receiving a Cy Young vote. The latter should change this year. Before it does, let’s recap the three reasons Cueto is so fun to watch.

Reason No. 1: The Delivery
Cueto returned from shoulder inflammation on May 8th last season. On June 22nd, he started the second game of a day-night doubleheader against the Yankees. Cueto debuted his new Luis Tiant-like delivery that night.  Go back and view Cueto’s delivery prior to the change and the added half-spin appears to be a natural progression. Cueto would throw seven innings of two-hit, one-run ball that night.

But the delivery didn’t transform Cueto from bad pitcher to good pitcher: His 2.64 ERA from June 22nd forward actually increased his seasonal mark. What the new delivery did is give Cueto a defining physical characteristic—besides his dreadlocks and stylistic beard-trimmings. 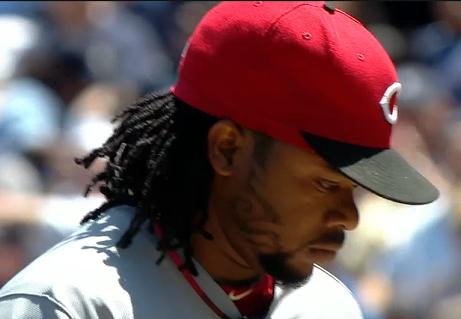 How deceptive is Cueto’s delivery to the batter? On a broadcast earlier this season, Keith Hernandez suggested not very. Hernandez explained that Cueto’s motion is fluid, and smooth. There are no herky-jerky motions, with limbs moving erratically. Cueto just coils and uncoils. Besides, Hernandez said, as a hitter he always focused on the release point, not the pitcher’s pre-release motions.

You might think Cueto’s delivery would be a pitching coach’s nightmare. But then consider that Cueto’s spinning ways were borne from a mechanical concern, as Tyler Kepner explained last July:

Bryan Price, the Reds’ pitching coach, explained that Cueto’s natural momentum had always spun his body toward first after he released a pitch. But his front leg was opening too soon, and Price wanted him to keep his weight back.

The idea was to tuck Cueto’s front knee back, so his hip could spring to the plate instead of leaking toward first base. Cueto took to the changes and exaggerated them, partly to shield his hand position from the hitters and keep from tipping his pitches.

To gain more insight about Cueto’s mechanics, I talked to BP’s mechanics guru Doug Thorburn. “Pitchers who use the corkscrew into maximum leg lift are often attempting to increase forward momentum after max lift, with the caveat that it takes them longer to get going toward the target,” Thorburn said. “But Cueto's momentum is very modest.

“Meanwhile, many corkscrew pitchers have trouble with timing consistency into foot strike, while Cueto is actually quite good at this,” Thorburn added. “The corkscrew also creates a huge timing disparity when pitching from the windup vs. the stretch, with many pitchers struggling to harness a second time signature, and in this case Cueto follows the normal trend.”

Reason No. 2: The Body
Before you notice the delivery, you notice Cueto’s body. He’s a small, Dominican-born right-hander with a feel for a changeup. Comparisons to Pedro Martinez are unfair, but inevitable. Cueto has the archetypical pitcher’s body, with the thick lower half that appears strong and sturdy. He also has better athleticism than you might expect. His body control is solid and he has quick feet.

Those quick feet come in handy in controlling the running game. Since the beginning of 2011, Cueto has allowed two stolen bases. During a start against the Cubs early in the season, Cueto balked on a pickoff attempt. Bob Brenly, a former big-league manager and catcher, revealed Cueto’s misdemeanor—he bent his front knee before disengaging from the rubber—and called it a veteran move. The idea being this: the runner uses the front knee as a trigger. Flexing of the front leg means the pitcher is going to start his delivery. You wonder how often Cueto gets away with it.

Fewest Stolen Bases Allowed by Starters with at least 800 Innings, 2008-12

3. The Feel
While Cueto physically resembles Martinez, you can’t help but notice that a few of his strategies are taken from the Greg Maddux school of pitching. Maddux became renowned for his particular usage of the two-seam fastball. He would start the pitch at a left-handed batter’s body and have it work back into the strike zone. Cueto shows an aptitude for this same strategy, as seen below against Omar Quintanilla:

At another point, Cueto has the bases loaded and Kirk Nieuwenhuis due up. Cueto was on the ropes, having just walked in a run by issuing a free pass to the pitcher. In tough spots, Maddux used to say pitch softer, not harder. Cueto does just that against Nieuwenhuis. He starts him off with three changeups—working a 1-2 count—before going to a fastball. He then buries a breaking ball for another ball to run the count. Nieuwenhuis fouls off two more changeups and another fastball before whiffing on a two-seamer away to end the threat. Nine pitches, three fastballs.

Cueto combines good raw stuff with an advanced feel for pitching. He seems to have a knack for inducing double plays, and hitters rarely seem to get good wood on his offerings. Despite a small stature, Cueto is built like a pitcher with a thick lower half, though he is athletic—in terms of foot speed and body control, but also in how he’s able to retain his velocity deep into games.

The Reds are a fun group to watch. Cueto is a big reason why.

*Defined as pitchers with 100-plus innings in a season.

You need to be logged in to comment. Login or Subscribe
captfadeaway
Thanks for the nice breakdown. Cueto's success over the past season and a half has generally been either ignored or written off as a fielding-dependent mirage, but at this point, he deserves to be taken seriously.
Reply to captfadeaway
iolair00
This would be far more interesting if it wasn't about a pitcher who ended another man's career with a kick to the head. Cueto's career should have ended that day.
Reply to iolair00
flyingdutchman
Cueto served a 7-game suspension for ending LaRue's career with his absurdly violent kicks. Could've been worse though. He could've taken STEROIDS.
Reply to flyingdutchman
hjw099
Great article.
Reply to hjw099