Earlier this week, the Seattle Mariners traded their aging superstar Ichiro Suzuki to the New York Yankees for a couple of prospects. There had been talk throughout the season about what the Mariners might do with their increasingly expensive and increasingly old future Hall of Famer, but the news of his trade to the Yankees still came as quite a surprise. There wasn't even the hint of a leak of the news before the announcement came out and Ichiro walked across Safeco Field and into New York's clubhouse on Monday.

As one of those baseball fans who loves Ichiro and hates the Yankees—Tobias Funke would be happy to know that there are more than merely "dozens of us"—I find it hard to process Ichiro in pinstripes. How long will he play for the Yankees? What role will he fill? When we think back on his career, are we even going to remember his time in the Bronx? Will the trade re-invigorate his career? There are too many questions to list, but what the trade has really made me think about is something that happened 40 years ago: the time Willie Mays was traded to the New York Mets.

Obviously, the circumstances are different. Mays was one of, if not the greatest players of all time who was 41-years-old and who had been with the Giants for 21 years. Ichiro is a fantastic player, a cultural icon and someone who, while likely to make it to the Hall of Fame, still has detractors. Regardless, I can't help but wonder how surprising the news of Willie Mays' departure to the Mets must have been. It turns out the story is a bit more complicated than Ichiro's.

On May 5, 1972, Mays was batting .182/.390/.227 for a poorly performing Giants team. That day, Jack Lang of the Long Island Press reached Mays by telephone in Philadelphia. He called to ask if Mays had heard anything about the Giants trying to trade him to the Mets.

"I don't know anything about it… If they want to trade me I guess they can do it. But you just don't get up and move because somebody doesn't want you anymore. We'll just have to wait and see."

He also added "I only regret I wasn't told."

The next day, Mays' 41st birthday, the story was everywhere. Even San Francisco and New York executives Horace Stoneham and M. Donald Grant, respectively, had already chimed in, acknowledging the possibility.

Stoneham: "I didn't think it would get into the newspapers. Maybe we'll talk when we go to New York. We'll discuss it. We'll discuss the possibility. … It's terrible to even think about it; there's a very sentimental and emotional factor involved."

One report said that the talks had intensified while the Mets visited the Giants in San Francisco earlier that week. The Giants were scheduled to visit Shea Stadium that Friday, May 12. On Wednesday, a report came out that Stoneham's demands for multiple players—and not money—was a stumbling block in the deal. "Mays deal off", the headline proclaimed. It was also mentioned that any deal was contingent on Mays agreeing "to finish out his playing days in New York." Grant and Stoneham actually invited Mays to the trading table to help clear up any concerns he might have. 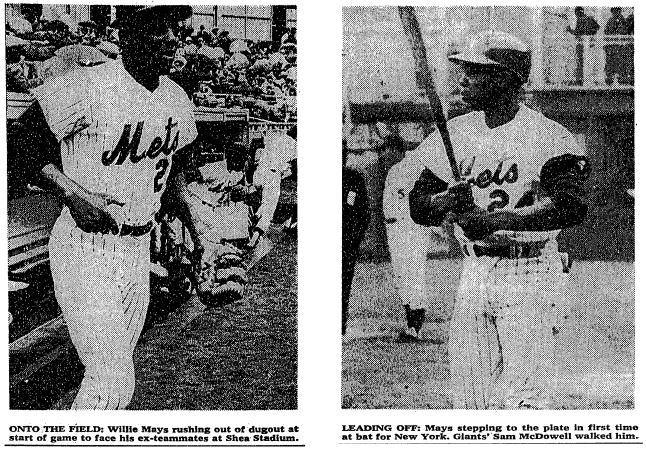 On Thursday, May 11, Willie Mays was finally traded from the Giants to the Mets for minor league pitcher Charlie Williams and some cash. It was hardly the surprise that Ichiro's trade to the Yankees was, however, with the ordeal having been played out in public for a week. It was still a shock to see Mays in anything but a Giants uniform, as these photos from the New York Times show.

Mays made his debut as a Met on Sunday, having been given permission after the trade to fly back to San Francisco for two days to see his family. In his debut, Mays hit his 647th career home run en route to a New York victory over the Giants. It would be one of only two home runs Mays would ever hit against the Giants.

Mays' tenure as a New York Met is not remembered well 40 years later. The image of him falling down in the outfield is often used as shorthand for a player hanging on too long these days. We can only hope that Ichiro's time in New York ends as differently as their two trades went down.

You need to be logged in to comment. Login or Subscribe
briankopec
Mays may have fallen down in the outfield in 1973, but I have to think the Yankees would be thrilled if Ichiro gave them the same 2 WAR (OPS+ 145) that Mays gave the Mets in only 69 games in 1972.
Reply to briankopec
lgranillo
Good point. Mays really was quite good still in 1972. The difference between his AVG and OBP is amazing. I'd love for Ichiro to do that for the Yankees. The sad end I hope he avoids is Mays' 1973 season, which is the one everyone remembers (and uses for shorthand) these days.
Reply to lgranillo
dcarroll
The right caption reminds long-time Giant fans of another distressing trade: Gaylord Perry for Sam McDowell.
Reply to dcarroll
BROTHERZIP
Amen to Mr. Kopec's remarks. I was at Mays' first game as a Met. I was 16, with a gaggle of my buds who had taken the train in, and I can remember the stadium going quiet when Mays hit the ball toward the left field bullpen, all of us hoping that we were getting what we wished for, and then euphoria as the ball landed on the other side of the wall. Great moment. I don't remember Mays falling down in the outfield, but check his OBP in '72. He was a good leadoff hitter for the Mets that year, and it was nice that he got to the World Series the next year, even if it was time to hang 'em up.
Reply to BROTHERZIP
smitty99
If you guys ever get a chance to read any of Roger Angell's great books from the 60s and 70s I'd recommend any of them. He was an essayist for the New Yorker who wrote about baseball at times. He published several collections of his baseball essays. In the one that covers the seasons including 1973, his observations of Mays' struggles in the field are pretty memorable. At least to me as I remember them after a few decades.

Reply to smitty99
RoyHobbs
The Mays I saw play was truly a shadow -- post-retirement in an exhibition game against the Mets' AAA Tidewater Tides.

And he still went 2-4.
Reply to RoyHobbs
lgranillo
Interesting. I wonder why he was a part of it. Maybe the personal services contract that was such an important part of the trade (he already had one with the Giants, but they wanted to ensure the Mets took it over/gave him one after the trade)... Do superstar players still take part in post-retirement exhibition games now?
Reply to lgranillo
jayhook62
I don't remember Mays falling down in the outfield however I do remember him falling down running the bases.
Reply to jayhook62
jfranco77
A nice jolt for those of us who have already forgotten that Ivan Rodriguez played for the Yankees briefly (in 2008)
Reply to jfranco77
diryn1
I was at that world series game 2 in Oakland when Mays had trouble playing center field. What is usually not remembered about that game is that Mays got the game winning hit in extra innings. I believe that was the last hit he ever had. I think that was the game Mike Andrews botched a couple of plays in the field and Charlie Finley tried to keep him from playing again in the series (may have been the first game of the series). If I remember right Bowie Kuhn forced Finley to reinstate Andrews for the rest of the series.
Reply to diryn1