Thank you for purchasing this Monster Manual MLB Expansion Pack. This edition features dozens of position players guaranteed to breathe new life into your G&G adventures. 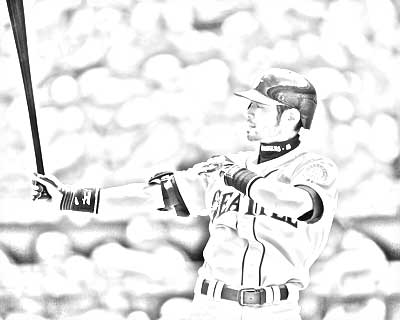 Ichiro was transported to this dimension ages ago and has tormented pitchers with his bat and hitters with his arm and glove ever since. His 18 Dexterity grants him three attacks per round, and his small frame belies his great strength. Legend has it that Ichiro traveled across the continent and sold his soul for an opportunity to become immortal. In doing so he switched from Lawful Good to Lawful Evil; his alignment in your game will depend on whether your characters encounter him before or after his conversion to Yankeedom.

Spell-like ability: Once a year Ichiro can cast a Profanity-laden All-Star Game Speech which grants a +8 morale bonus to his companions, while opponents must make a Will saving throw.

Like fellow right fielder Ichiro, Bautista is deceptively strong. But whereas Ichiro says he could hit 69 home runs if he wanted, Bautista does it. The thing is, no one knows exactly how he does it. He seems to have achieved divinity through some method (see “Earned Divinity,” Appendix III), possibly by meeting the challenge of or defeating some little-known god. One day he appeared to be a mere mortal, and the next he was one of the most fearsome hitters known to man. Not even the most reverend clerics in the land can sufficiently explain it.

Bautista has many devoted followers, especially across the frozen tundras of Kanata. He chooses to communicate directly with his many worshippers using Twitter spells, obviating the need for an organized clergy. According to legend, “once he puts the ball out of its misery he gives the nearest opposing player a death stare until he turns to stone.”1 Blue Jays forever, indeed.

Dee Gordon
Tiny Humanoid
Hit Dice: 1d6
Special Attacks: Howbout we get back to you on that
Alignment: Neutral Evil

Dee Gordons are pesky, sprite-like creatures found throughout minor-league baseball organizations. Occasionally one will ascend to the major-league level, usually by enchanting unsuspecting GMs, as has happened in Los Angeles. They are quick, but weak and easily defeated. They attack by bunting and slapping, and then stealing (or at least attempting to) once they have wounded the opposition. The best defense against Gordons is to let them hit you until they tire themselves out. 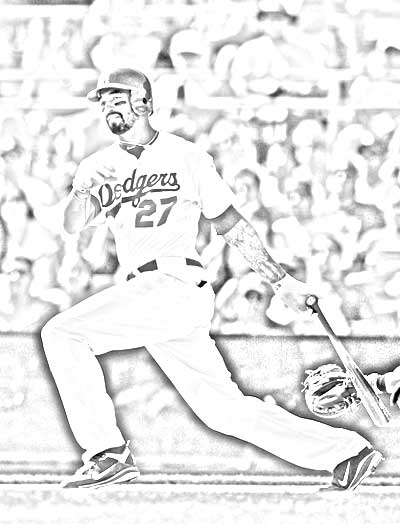 Also inhabiting Los Angeles, the Kemp couldn’t be more different from the Gordon. Blessed with otherworldly size, power, athleticism, and a million-dollar smile, Kemp is the last man you want to face when the game is on the line. He will find a way to beat you.

His only weakness is against female characters of the Bard class. When confronted by a female Bard with Charisma of 15 or better, Kemp must make a -3 Will saving throw.

Look at this sketch of Mike Trout. Just look at it. How cool does he look in that old-school Angels cap? Dude is pure 18s across the board. OK, maybe his Charisma is like a 16-17, and I’m not sure about his Wisdom, but basically the guy is the best player in baseba — I mean, G&G, and he’s like 20 YEARS OLD.

Totally broke character there for a minute. Sorry about that.

Mike Trout is like some magical guy you can put in your dumb game. And the best baseball player in the world. Whatever. 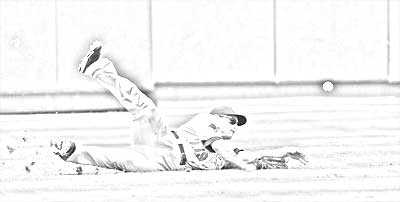 Hamilton is the opposite of Ichiro, in that he converted from a life of pure bacchanalian evil to one of lawful good. Your campaign must account for this conversion timeline in order to determine his alignment.

While he is exceedingly quick and strong, Hamilton often makes tactical errors in battle, opening himself up to attacks. In combat, every other time Hamilton sustains damage, he must make a Fortitude saving throw. If he fails, the attack is considered to constitute Massive Damage and Hamilton is defeated (or, more accurately, has defeated himself). 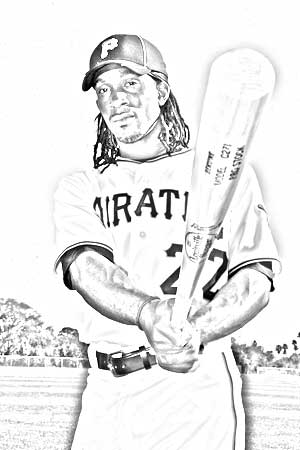 McCutchen is a deity sent to this plane to free the people of the Steel City from decades of misery and oppression. He cuts an intimidating feature, with a strapping build and long, flowing black hair. His only weakness seems to be the inability of people to spell his name correctly.

Once revered as a near-god in The Good Land, Braun suffered a fall from grace when he allied himself with Affliction, widely considered to be the most evil force in the multiverse.

Disgraced, he now lives in his lair, attended to by scores of comely maidens and surrounded by treasure. He emerges only to quaff the casks of ale villagers leave as tributes, and to compete in baseball games. 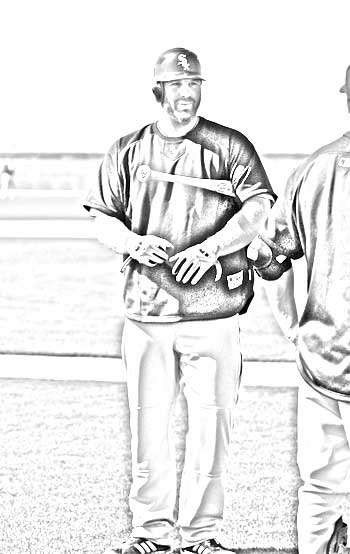 A ronin, he walks the land offering to hit for whichever warlord pays his fee. Dunn is a practitioner of the Way of the Three True Outcomes. Every third time a player is struck by Dunn, the player must make a Fortitude saving throw or suffer Massive Damage from the Donkey Kick Home Run. 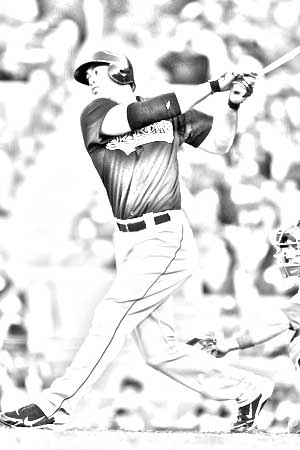 Shortly after he was born, Stanton’s mother anointed him with ambrosia and held him over a fire by his knee to burn away his mortality. His entire body is impervious to edged weapons, with the exception of his right knee.

Stanton walks the land with his cherry Marucci club, performing labours that would be impossible for mere mortals. These include defeating the Wraith-King Jamie Moyer (see MLB Expansion Pack: Pitchers, Vol. 1), cleaning the stables of Sun Life in a single day, and slaying Loria, the nine-headed hydra.

You need to be logged in to comment. Login or Subscribe
Chucko
Apparently the Loria actually has ten heads. Bummer.
Reply to Chucko
fawcettb
Goblins aren't real. Grow up. (of course, that can be said of anyone who cares about baseball.)

Reply to fawcettb
chabels
I expect player cards to be replaced with these by the 2013 Annual.
Reply to chabels
Vicmill1
I have never played even one minute of D&D but I delight in your fantasmagorical G&G packs which appear to encode fan-gossip and keen insight into the immeasureables in this fabulous sport. Bravo. Makes as least as much sense as any sports writer on your watch list.
Reply to Vicmill1
fgreenagel2
awesome
Reply to fgreenagel2
I75Titans
Ryan Braun's Special attack is classic. As someone who played D&D in my misspent youth, it brings back memories. Well done!
Reply to I75Titans
yadenr
Why, WHY did you make me look up what Affliction is? I must now make a saving throw or lose my eyes.
Reply to yadenr
Oleoay
When I saw Affliction, I figured there was a herpes joke in there somewhere.
Reply to Oleoay
yadenr
I did not win the saving throw, but luckily my qwerty skills are +15.
Reply to yadenr
delorean
Hey, why should I suffer alone? Come, join me in my misery!
Reply to delorean
jfranco77
Why is poor Andrew McCutchen only a neutral good? Is it because of the whole piracy thing?
Reply to jfranco77
chabels
that and his production of ARRRRRRRRBIs...
Reply to chabels
mnsportsguy1
spitting mountain dew all over a laptop is expensive, thanks SC
Reply to mnsportsguy1
fandamage
This is amazing.
Reply to fandamage
dannybaseball
I'm now convinced that Ian plays MTGO.
Reply to dannybaseball
delorean
I'm innocent, I swear! I even had to google "MTGO."
Reply to delorean
Oleoay
Card Name: Chipper Jones

If your opponent has taken damage this turn, you may tap Bryce Harper to deal damage to target opponent equal to Bryce Harper's power.

Like fellow companion Bautista, Encarnacion is deceptively strong. But whereas Bautista has hit 69 home runs, no one is sure if Encarnacion will or not. He seems to have achieved longer life based on a blessing from a Anthopoulos warlock, bound to remain in the Canadian plane for the next three years or until the Anthopoulous tires of the illusion. One day Encarnacion appeared to be a mere mortal, and the next he looked like one of the slightly more fearsome hitters known to man. Not even his old mentor, Dusty Baker, can explain it.

If Encarnacion is not equipped with a wooden staff of less than 42 inches in length and is within 10' of any spherical objects that can be used as ranged weaponshe must make a Saving Throw vs Willpower +2 to avoid Confusion. If he fails his saving throw, inscribing the glyph "E5" with a No. 2 pencil strips Encarnacion of all illusions and he takes double damage.
Reply to Oleoay
delorean
I'm outsourcing all future work of this nature to Richard. No way can I compete with that!
Reply to delorean
Oleoay
Hey, you came up with a great concept and the detail you put into it was detailed and very inspiring (and a good excuse for me to geek out a bit).
Reply to Oleoay
Oleoay
Correction: detail you put into it was _immense_
Reply to Oleoay
eighteen
LookoutLanding used to have a bunch of these that were hysterical, but I can't find them there now.
Reply to eighteen
Oleoay
The minusbats are out in force. Le sigh.
Reply to Oleoay