"Ryan Woodward's Bottom of the Ninth: An Animated Graphic Novel" is a work of art that all baseball-loving tablet owners should download immediately. At its most basic level, the iPad app (available in the app store) is simple and straightforward: an "animated graphic novel" is just as it sounds, a graphic novel that uses the power of the iPad to give life to its images. Imagine Batman standing vigil over Gotham City, looking down from high up amongst the gargoyles, his cape literally flapping in the wind, the bat-signal shining brightly on a wavering cloud. Or imagine seeing the lightning actually crackle over Thor's head as he lifts his hammer high into the sky. These images are memorable enough on a static comic page; in animated form, they are unforgettable. 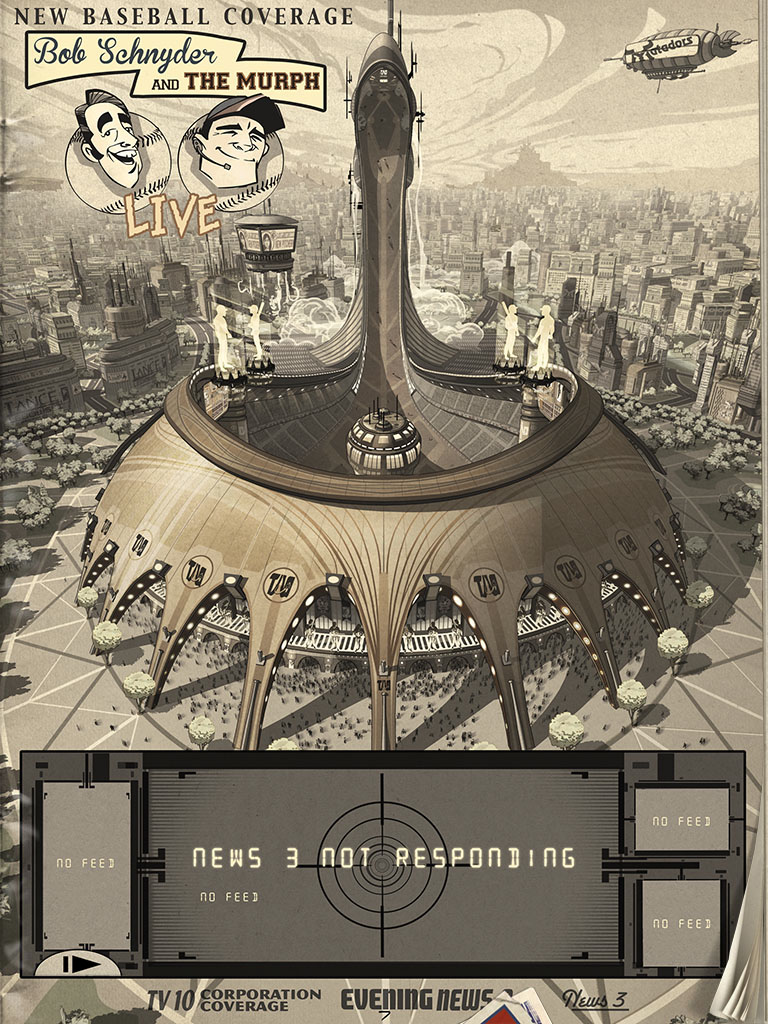 As you turn to this page, Bob Schnyder and the Murph give some pregame comments. Click the image for the full size.

Woodward's "Bottom of the Ninth" takes this concept and improves upon it to an amazing degree. This isn't Christopher Nolan turning a difficult-to-understand concept into a dream-diving blockbuster. This is George Lucas turning Saturday-morning pulp into a laser-popping wonder, Georges Méliès showing the world what film can do with the right imagination. Best of all, Woodward does it all with baseball.

Part one of a ten-part series, "Bottom of the Ninth" is set two hundred years in the future, when sports fans have become enraptured with a game known as "New Baseball." The game is much as we know it today, with some minor changes: artificial gravity glues the players to the ground, allowing the infield to rise vertically hundreds of feet into the air while outfielders patrol a concave expanse below. One day, the Tao City Pilots, a losing team led by their media star Lance Lebowski, decides to pitch an 18-year-old woman named Candy Cunningham. Some fans love the team's new addition while others—including some in a position of considerable power—aren't quite as happy.

The story is strong enough to stand on its own—an inventive new version of the national pastime, intriguing villains, a well-realized female hero playing in a beautiful environment—but it comes to life more than you can imagine in this new form. While other "motion comics" might be content to just show Candy's hair flapping in a breeze or a fan jumping up and down behind the plate, Woodward immerses you in the world. Music plays over the scene, cars whip past on the roadways, fans hoot and holler.

On every page, the "reader" has a number of choices. Some panels have a little icon denoting that a fully animated scene lies behind it. These scenes vary from brisk establishing shots to longer, plot-forwarding scenes. Other panels are marked with an audio icon, letting readers hear things not shown in the scene already. Most importantly, every piece of dialog on the page is recorded by a talented voice-actor. To hear it, one need only tap on the speech bubble. Readers can choose to read the page without any of these added animations (the story is written in such a way that they won't miss anything important) but they're missing out on what makes "Bottom of the Ninth" unique. 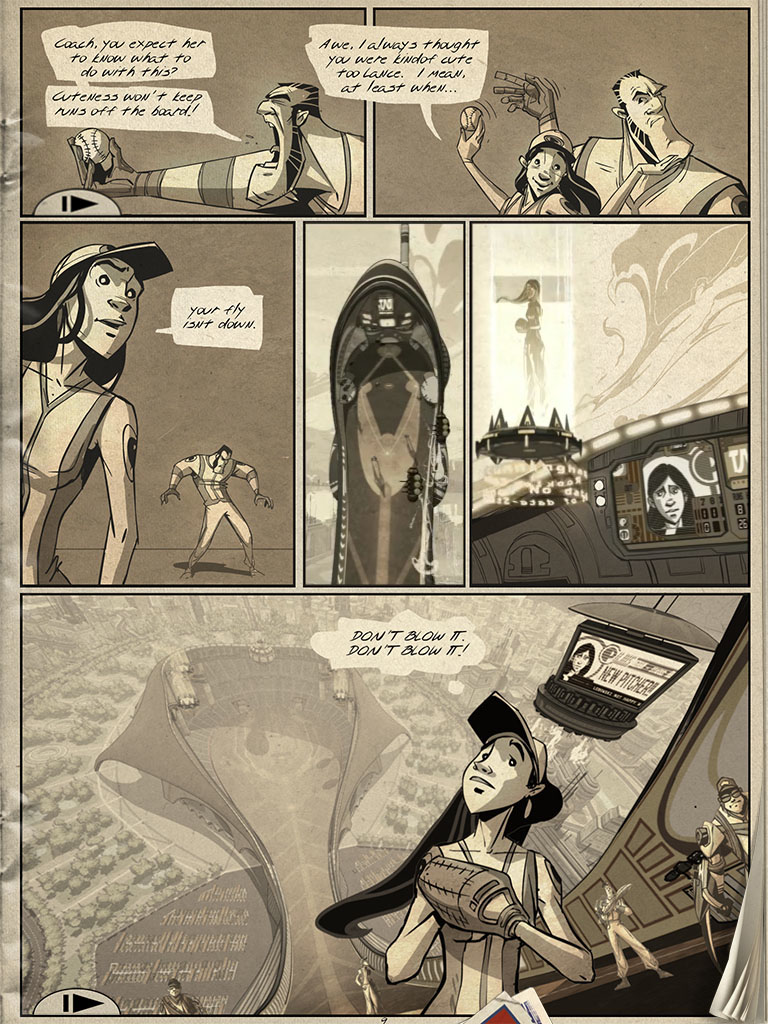 In the app, four of these panels are animated. Click for the full size.

The vocal performances actually expand on the written text. For example, in the scene right before Candy Cunningham throws her first pitch, her anxiety shows through. When written, it's two lines of "Don't blow it. Don't blow it." When performed, however, it's 45-seconds of legitimate nerves, brilliantly vocalized. Not only do those 45-seconds add to the scene, they also add to Candy's character, giving the reader a better view into her personality than any single comic panel ever could.

The quality of the voice acting and the music really helps bring things together. It mixes well with the high production values of the animation, making every page and every panel a treat for the reader. The app isn't perfect, of course. Every now and then a panel's animation takes a bit longer to load than expected, making it seem like you didn't press the button that you thought you had. Other times a stylized panel shows up that looks like it should be animated, but isn't, leaving you pressing it over and over again. These are minor, nitpicky issues, however. There's nothing about this app that doesn't make me want to read it everyday.

Woodward is a veteran of Hollywood, having worked as an animator and storyboard artist on some truly great films, including The Avengers, Space Jam, and The Iron Giant. As Woodward claims on his website, this animated graphic novel has been a dream of his for forty years and it shows. The little things really make the app, and they're everywhere: a fan sitting by himself, happily chanting away; advertisements in the back pages for products like "The Goofy Gordy Show" and the Sub-10 Roadmaster bicycle, complete with animation; Dale Murphy (yes, that Dale Murphy) lending his voice as ex-New Baseball star and radio personality "The Murph". If you love baseball and you're looking to experience a new story in a new format, the "Bottom of the Ninth" app is a must-get.

Issue #1 is being offered for free. There is no excuse for any iPad owner not to check it out. Future issues will be available as an in-app purchase and are expected to be released every few months. You will not regret spending a few minutes in Tao City and the world of New Baseball.

You need to be logged in to comment. Login or Subscribe
drawbb
The Avengers and Space Jam are "truly great" films? Wow.
Reply to drawbb
ThreeSix
truly successful that's for sure. while i wouldnt consider them "great films", they are very entertaining and fun to watch. which is exactly what you need for comics, oh I'm sorry, "Graphic Novels" is what we're calling them these days
Reply to ThreeSix