Since the very first Best Pitches Thrown This Week, we’ve bumped up against the limits of what we can really conclude about a pitch. The pitch is not meant to impress us; it is meant to impress the batter, and we are not the batter, so our conclusions are answering the wrong question. So this week I asked some baseball players to name the nastiest pitch they have seen this year. These are their answers, which are interesting to me because these are absolutely not the answers I would have given for them. None of these guys even fell over! Batter falling over is 90 percent of my typical assessment. But they know. I don’t know. They know. Here we go.

All three of these pitches are somewhat surprising choices, and they are all surprising in different ways. Here’s what Bourjos says about this pitch, which was the first split-finger he saw that day (but not the first time he had ever seen Garcia’s splitter) and which came on a 2-2 pitch in Bourjos’ second plate appearance:

“It looked just like a knuckleball and took off. I think it's just how it comes out. It came out with good rotation and just went down. A good split doesn't tumble a whole lot. It's going to drop at the last minute.

“I was half-looking for it. Obviously when he’s got two strikes on you so you gotta be ready for anything, but I was expecting it. That’s his pitch. He just threw a good one.

“He threw me a couple last year and they more kind of tumbled, and yesterday the one he threw me was good, it didn't have a lot of rotation, and it took off.  You know, I saw it, recognized it, and it looked like it was going to be a strike and that’s why I swung. At the last minute it dove out of the zone.

“When he throws a good one it's gonna do that. That's why he's had such success, is that split, especially now that he doesn't have as much velocity.”

Layman’s view: Crud I missed it.

I’m 100 percent sure I wouldn’t have ever picked this pitch, because I could barely even see this pitch. The camera cuts to it so late, and there is no replay, so basically we’ve got a fade into the last 20 feet of the pitch and what appears to be well-leveled ball that gets in on the handle and turns into a double play. Also, it’s a fastball. Also, it is 84 mph. Also, this is the location: 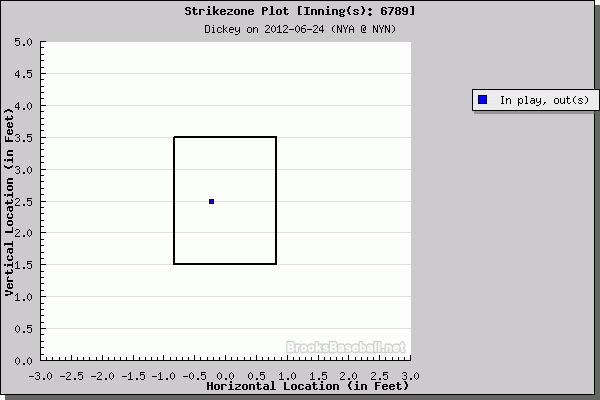 “I think it was a first pitch and I was actually sitting fastball, and it looked like 120 mph coming at me and shattered my bat and I hit a little squeaker groundball to the shortstop. [Actually second baseman.] So.

“I saw all knuckleballs (in the first two at-bats) and I know he throws more fastballs than an average knuckleball guy and I was actually sitting on the fastball and sitting on the location he threw it and it was just harder than I thought it was. It was the first pitch and so I might as well get something good and get something to drive. And he threw the exact pitch I was looking for and I just couldn't catch up to it.

“He throws a harder knuckleball than normal, but you're really trying to focus on picking it up and where it's going to be and seeing it so you can hit it, and the fastball off of that just looks way harder than it is.”

R.A. Dickey doesn’t throw a very good fastball. If he did, he would never have bothered with the knuckleball, and if he did he would have been successful years ago. Dickey’s fastball averages 83 mph. He throws it every six or seven pitches or so. It is also very successful:

The league average for fastball strikes is about 64 percent. Lest you think that Dickey is, like other knuckleballers, throwing the pitch only when he’s behind in the count and has to come in with a strike, that’s not the case. He throws it more often when he’s behind in the count, as most pitchers do, but he throws it nearly as often to start at-bats, or in various two-strike counts. He threw it 15 times in the game against the Yankees: four balls, nine strikes, two groundouts. Just one game, but for just one game it was very effective.

Layman’s view: Looks okay. Is there one where the batter falls over on his butt?

Lower in the zone, or out of the zone, and eventually in the catcher's mitt. The one that Chavez identified is not the one I would have identified. But here’s what Chavez said:

“It was 1-1. I was expecting a heater because he just threw me a—it might have been 99. The 99 was the second-best pitch I saw this year. I took it, for a strike. And then he threw me a slider and I hit it like a Little Leaguer to second base.

You need to be logged in to comment. Login or Subscribe
GoTribe06
Loved the player's take on the best pitches they have faced. I am impressed that Chris Stewart would mention Dickey's fastball. I would think some part of you would not want to admit being outdone by a mid-eighties "heater".

As always, one of my favorite reads. Thanks Sam!
Reply to GoTribe06
Oleoay
Can we take the pitch fx data for the Garcia/Bourjos splitter and compare it to previous Garcia/Bourjos splitters? If Bourjos said it's the best splitter he'd ever seen from Garcia, then maybe we can glean what elements of pitch f/x data seemed to stand out.
Reply to Oleoay
rileybreck
I've been staring at the GIF of Kimbrel's slider to Ike Davis for far too long, hoping that eventually it'll make sense (or at least that the awe will wear off a bit), but it's not happening. That is just a filthy, filthy pitch.
Reply to rileybreck
zmooney
This is fantastic! I love to hear the players' takes on these pitches. Thanks for doing this.
Reply to zmooney