On Tuesday, Stephen Fife (whose nickname is clearly "Dawg" and I will brook no argument on this point) made his major-league debut and did one of those things you're not really supposed to do in baseball, which was throw six innings and allow just one run while striking out exactly one batter. (The one batter was Jimmy Rollins, who will make $22 million over the next two years and has a vesting option for 2015.) Fife, clearly a believer in equality and fairness, created the same number of strikeouts at the plate as he did whilst on the mound.

There are a variety of ways we can slice this to show the context of what Fife did. He threw the 52nd quality start (using three runs, not earned runs, as the cutoff) this season with at most one strikeout. Derek Lowe's done it *six* times. Restrict things to one run allowed or fewer, as Fife managed, and you're down to 17 occurrences this year, which is not a ton but is still a handful every month.

That's, honestly, more than I thought there would be before I started doing research. But what about the fact that this was Fife's first big-league game? How often has someone's debut been an almost all-contact quality start? Answer: Eighty-five times since 1918, which is a little bit less than one per year. This isn't a relic of a bygone era, either. The last five pitchers to accomplish this prior to Fife are Lucas Harrell (2010), Luis Atilano (same), Vin Mazzaro (2009), Matt Harrison (2008), and Jesse Litsch (2007). Harrison has become a good pitcher, keeping his walks and homers low in trade for not striking very many batters out, but the rest of that list is not inspiring.

Then again, Mike Mussina debuted with 7 2/3 innings of one-strikeout, one-run ball back in 1991 (throwing 129 pitches in the process—baseball!), and Mussina wound up just shy of 60 WARP, a mark that places him between Curt Schilling and Tom Glavine on the all-time WARP leaderboard for pitchers. (It's a total that's closer to Bob Gibson's than you might have guessed, by the way. Do note, though, that our WARP goes back only to 1950.) Of course, Mussina was Baseball America's number-19 prospect in all of baseball prior to 1991 while Fife did not rate a mention in either this year's version of the Baseball America Prospect Handbook or Kevin Goldstein's Top 20 for the Dodgers. Indeed, the man has been written about in these pages only in connection with his inclusion in last year's weird three-way Erik Bedard deal in which Trayvon Robinson somehow ended up in Seattle. The words written about Fife were neither inspiring nor depressing. Here's Goldstein:

A third-round pick in 2008, Fife has moved slowly through the system, and has lowered his ERA by more than a run this year (it's at 3.66) while repeating Double-A. He throws an average-velocity fastball with a bit of sink, and displays a solid curveball/change combination while commanding everything well. There aren't any dings against him, but there is nothing to be excited about, either. He projects as a middle reliever.

Do you need other reasons why Fife is not Mussina? The National League's strikeouts-per-nine this year is 7.7. The 1991 American League sat at 5.7. It was a lot more reasonable for a starting pitcher to strike out one batter in 1991 than it is now.

Having fully established the proposition that Stephen Fife and Mike Mussina oughtn't to be mentioned in the same sentence unless that sentence is to the effect that they should not be mentioned in the same sentence, we can ask: How did Fife do it? You'll be shocked to learn that per the Brooks Baseball data, Fife throws a 91-mph sinker. Of course he does, right? Besides Kevin Goldstein having already told you that in the blockquote above, that's the pitch that pitchers of Fife's ilk throw. He also throws a fastball at the same speed that's straighter horizontally but has very similar sink. Despite that, check out his strike-zone plot: 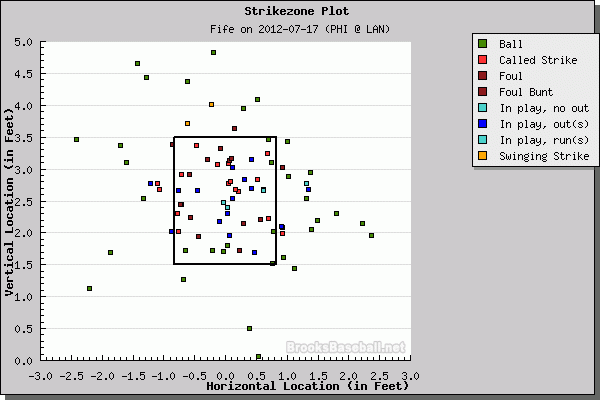 That's not exactly loaded with bottom-of-the-zone goodness. Nor, in case you can't tell at a glance, is it loaded with swinging-strike goodness. He got exactly two of those all game, both on fastballs up and out of the zone. Do you see them? Here, this is what happens when you give me Microsoft Paint: 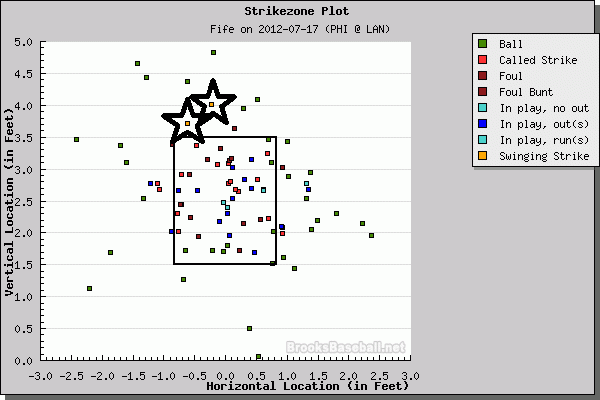 Now do you see them? They're the ones with stars.

I video-scouted Fife so you don't have to. By which I mean I watched him pitch via MLB.tv and took a few notes. (I'd have taken a few GIFs, too, but (a) Sam Miller would sue me; (b) MLBAM would sue me. I'm more afraid of Sam, to be honest.)

Fife is a big guy, solidly built, and he has glasses. (Are glasses more prevalent in baseball than they used to be? As in, compared to 10 years ago? Given the indestructible materials players have access to these days, they seem more practical than worrying about a contact lens falling out or having dirt get in the eyes or what have you. Did players in the past not wear glasses because of the image associated with such a sartorial choice? Do they not care now, or is there some weird positive image associated with the glasses? There's an investigative piece to be written here, surely.)

Fife's delivery does not jump out at me in any way—it doesn't strike me as particularly deceptive (though who knows, of course, from the offset centerfield camera) or weird, though I obviously defer to Doug Thorburn on actual mechanical issues. As an aesthetic matter, pretending that we're stuck in the 1950s and you can't go watch him on internet video any time you want, here's my description: he throws like a right-handed pitcher with a 91-mph sinker.

To recap: that's two sacrifice bunts, one pitcher at-bat that was not a sacrifice, five grounders I'd call "hard" or "solid," two flies that I'd judge the same way, two medium grounders, one medium fly, and three weak grounders.

That leaves two outs not on the list. One was Fife's sole strikeout, of, as I mentioned before, Jimmy Rollins, the final strike coming as Rollins chased a pitch up and out of the zone. The other was Ryan Howard hilariously being thrown out by Matt Kemp trying to score from second on a single. He barreled toward home, and the combination of his "speed" and the fact that he tried to change directions on his slide, attempting to take an inside path to the plate, left him essentially belly-flopping onto the plate. I'm fairly certain that he rolled laterally after hitting the deck farther than he slid forward. Anyway, Howard was called out, ending the sixth inning, and thus was Fife spared from having to face another batter.

Without any data that we can actually trust on hard vs. soft contact, it's impossible to judge this outing against the league, but it certainly seemed that Fife got a lot of outs on solidly struck balls that happened to go directly to his fielders.

***
Mainstream sabermetric culture (is that an oxymoron?) has gone through a variety of phases regarding balls in play, defense, pitchers, luck, and whatever other words you think fit in this sentence. I think we are past, or are at least in the process of moving past, the era of "his BABIP is .255, he'll regress and get worse" and "his BABIP is .334, he'll regress and get better." Don't get me wrong: These statements are frequently true. They're just not as helpful as legitimate scouting, PITCHf/x analysis, and so forth. We want "why," not "what."

Of course, I've done none of that here. What I've done is scouting where "scouting" = "watchin' TV on my couch" and PITCHf/x analysis where "PITCHf/x analysis" = "pastin' pretty pictures in a document. And puttin' stars on 'em."

And yet! Having done the above analysis (where "analysis" = "this joke is so tired"), I feel very comfortable narrowing the possible conclusions down to just two:

1. Stephen Fife is a collectivist philosopher who believes that all individual baseball success depends entirely on the contributions of the team of which he is a part due to the massively interconnected nature of the game. He is testing this hypothesis and will be publishing a paper in the SABR Philosophical Review in 2014.

2. Stephen Fife has a BABIP of .222 and he will regress and not be that good for the rest of his likely-non-lengthy major-league career.

You need to be logged in to comment. Login or Subscribe
Daddyboy
Because he's on my ridiculously deep strat team, I'm probably the only person rooting for this guy, other than his family, teammates, and Dodger fans. So Jason, I hope you're wrong, although I don't imagine you are.
Reply to Daddyboy
doctawojo
Rejected titles for this piece include:

* Paying the Fifer
* Probably Not the Next Mike Mussina
* Dodgers Got Fife On It
Reply to doctawojo
boards
Or "C'mon now, Barn".
Reply to boards