Claimed LHP Daniel Moskos off waivers from the Pirates. [7/6]

The Pirates sealed Moskos’ Pittsburgh legacy when they selected him instead of Matt Wieters in the 2007 draft. Five years later, Moskos gets a fresh start. Moskos continues to battle elbow issues, even this season. His upside points to left-handed specialist; a less than ideal outcome for the fourth-overall pick. But the draft status no longer matters. Besides, Don Cooper has done more with less before. Should Cooper work his magic with Moskos, then you could see him join Leyson Septimo and Brian Omogrosso on the Blackhawks third line. I mean in the White Sox bullpen.

Claimed C-R Adam Moore off waivers from the Mariners; optioned him to Triple-A Omaha. [7/7]

You can forgive Cain if he feels the universe is conspiring to turn the Royals fan base against him. Cain came to Kansas City in the Zack Greinke trade, of course. He spent most of last season in the minors due to uncharacteristically strong seasons from Melky Cabrera and Jeff Francoeur. When Cain did get his opportunity this season, he became the fifth different player to start in center field for the Royals on opening day since 2008. He then went 2-for-15 before straining his hip. Luckily for Cain, he has the talent to atone for a sluggish start. Those Royals fans that have soured on Cain should warm up once they realize his return means fewer plate appearances for Jarrod Dyson.

Three reasons can explain every acquisition: need, want, or obligation. Throw obligation out of the window because Dayton Moore and Adam Moore do not share blood. You can ditch want as well, although it may have applied a few years ago. This feels like a need-based move. Quintero’s release and Manny Pina’s ongoing rehab left the Royals with two healthy catchers on the 40-man roster. Had an injury occurred to Salvador Perez or Brayan Pena, the Royals’ alternative may have been Max Ramirez; and behind him on the Triple-A depth chart is Cody Clark. Moore is no great shakes, but having more organizational depth behind the plate never hurts.

Back in March, when explaining why he chose to re-sign Dustin McGowan, Alex Anthopoulos said, "But in this division, with what we're up against and what we're trying to do, we have to take a little bit more risk, or maybe a lot more risk than a lot of the other teams, and that's part of it. But I'll take the risk on the right human being, and if you bet on the human being, you're going to be fine."

In extending Encarnacion, Anthopoulos is again betting on a human being. This time it’s hitting coach Dwayne Murphy. It was Murphy, along with Luis Mercedes, who served as the guiding forces behind Encarnacion’s preseason mechanical adjustments. To be precise, Encarnacion shortened his swing and changed from a one-handed follow through to using both hands (as noticed by Jack Moore): 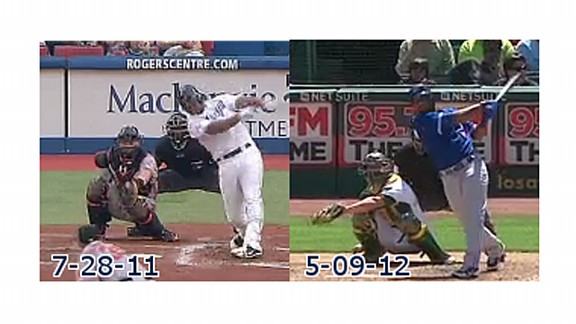 We’ve seen this help a batter before, just as we’ve seen the Jays bet on substantial in-season improvements before. The difference between Encarnacion now and the Jose Bautista and Adam Lind extensions of the past comes down to the track record involved. Encarnacion has had an adjusted-OPS over 100 in every season since 2006 except one. That’s not to say there isn’t risk involved. There is. Encarnacion’s value stems entirely from his bat.

But the money and length are reasonable here, and what alternative did the Jays have? Reports suggest they were feeling out the Encarnacion trade market as recently as last week. The new Collective Bargaining Agreement presumably killed their chances of getting a good piece back, since the new team could not receive draft-pick compensation. Similarly, the Jays may have felt Encarnacion would accept the qualifying offer. That left Toronto with two avenues: extend Encarnacion or let him walk at season’s end.

When the Twins extended Ryan Doumit I wondered if we’d see more good, not great players receive extensions as a way to improve their trade value. It applies here, too. The Jays can keep Encarnacion through season’s end and shop him in the offseason. Alternatively, they could keep him and see if these improvements have turned him into one of the league’s better hitters. If the worst-case scenario is having an above-average bat under control through the 2015 season at an average annual value of less than $10 million then you should probably feel okay about doing the deal.

You need to be logged in to comment. Login or Subscribe
antonio
Encarnacion may be merely good, but he's having a great season.
Reply to antonio
Oleoay
I'm an Encarnacion fan and, while the contract is a "good deal"... if I was the Jays and had $9 million to spend, I'd like to think there's something better to spend it on than a DH.
Reply to Oleoay
rawagman
Some mechanical notes on Encarnacion. When he first joined the Jays, and up til sometime last season (if memory serves) he would set up with his hands quite high, and his front bicep practically on his throat. To this viewer's eye, this slowed down his swing and almost cut him off from his own power.
Lately, his arms are lower and he has been more able to actuate his power and kill more balls. It may have saved his career.
Reply to rawagman
Scartore
Glad to see the Lil Dog get paid. I really think the Reds screwed up his development.
Reply to Scartore
danteswitness
I'm not sure there's a development screw-up there. He simply cannot field his position which made him far less valuable on an NL club than an AL club. Brief attempts to teach him other positions did not improve his situation. He's also had recurring health issues which may have stunted his growth but are not the fault of Cincinnati.

He's having a career year with the bat at age 29, almost three full years after leaving Cincinnati (in exchange for a player who has provided a higher WARP over the same period of time), and is being rewarded for it with a modest salary, relatively short-term deal. I'm not sure that Encarnacion, the Reds, or the Blue Jays have proven to have done anything wrong with his prior development, current playing, or future dealings.
Reply to danteswitness
Oleoay
WARP counts defense which is why Encarnacion gets dinged.

Also Encarnacion was repeatedly benched by Baker which probably didn't help. Encarnacion's definitely been healthier than Rolen too.
Reply to Oleoay
Scartore
Actually the damage was done by Boone/Narron. I'm no huge Dusty fan, and yes he was happy to replace EdE with Rolen. But he would never treat one of his players with the kind of dismissive disrespect that Narron did.
Reply to Scartore
Oleoay
Baker jerked around a lot of young players. Patterson, Cedeno, Murton would inexplicably get benched for weeks at a time, moved around the lineup, and told to alter their hitting approach.
Reply to Oleoay
Scartore
Oddly, he is showing impressive (perhaps unwarranted) patience with Cozart and Stubbs right now.
Reply to Scartore
Oleoay
Cozart is 26, Stubbs is 27... they're not young and it's not like the Reds have much in the way of other options either.

Reply to Oleoay
Scartore
Mostly emotional reaction from watching his career begin in Cincinnati. It was a frustrating time to be a Reds fan. I think Bob Boone and Jerry Narron really mishandled Eddie, jerking him around the lineup, inexplicable benchings, treating him like a rookie well into his career.

As for Rolen, I tend to think the Reds got realllllly lucky with that trade. Pretty much one season of good health, the last hurrah of a great player. But at this point I think that the fork in his back is really affecting his swing...;)
Reply to Scartore
sbnirish77
This guy has been a loser and a cancer wherever he has been. He finally has a career batting year to make up for his pathetic effort in the field and he's cashed in. Toronto will rue this signing and have to pay part of the contract to get rid of him before it expires.
Reply to sbnirish77
dethwurm
"Wherever he has been" is two places, Cincinnati and Toronto, and he's been in Toronto since 2009. It's safe to assume they know what they're getting into.
Reply to dethwurm
SGreenwell
Listen, there's no need to be coy. Tell us how you really feel.
Reply to SGreenwell
Oleoay
sbnirish is still waiting for Darren Dreifort to come off the DL.
Reply to Oleoay
jfhilton
I'm still waiting too. When do you think he will get back?
Reply to jfhilton