This is, unfortunately, about as much look as we get at most of these pitchers. Not surprisingly, when a baseball is traveling 485 feet, the camera does not focus on the pitcher who allowed it. I think you probably know enough about me by now to know that, were I in charge of TV broadcasts, in such situations the camera absolutely would focus on the pitcher. There's no suspense in where the baseball lands; it's going to land by some seats, or past some seats. The suspense is in seeing whether the pitcher performs suppuku. We will cobble together as much footage as possible to evaluate these pitchers' reactions, but I warn you: it might get epileptic up in here.

This is the first indication that this exercise might not produce the most extraordinary reactions. Here we see Trevor Cahill turning, watching, and otherwise doing nothing out of the ordinary. He's not ignoring the occasion, but he's also not doing the Roger Rabbit or anything. Here's the telling frame: 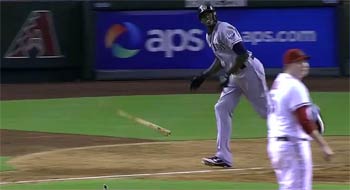 Tally: One of one pitchers have watched the home run.

Mark Grace: That's out there where Mark Reynolds used to hit them.
Guy Filling In For Daron Sutton: Heh. I remember Mark Reynolds.

Cassevah appears to be our first example of a non-watcher. But that's just his immediate reaction. Cassevah's curiosity gets the better of him.

He does, we can see, turn to watch. The ball landed 484 feet away, darned straight he's turning around and watching. People love watching long home runs!

This is Luis Mendoza dramatically underestimating what has happened in front of him. For just one second, Luis Mendoza sees that Travis Hafner has pulled the pitch, and Mendoza prepares to run over and cover first base. Then he realizes he has made not one mistake, but two mistakes. He turns and watches to see if the baseball is going to hit some baby or elderly person.

Bonus Only Two People Sitting In The Expensive Seats Behind Home Plate reaction:

White's reaction is probably the closest thing we've seen to the classic Whiplash reaction. There is actually some real difference between White's reaction and Cahill's. Cahill watches, but he's in no hurry to watch. He knows the play is over as soon as the ball is struck. White whips around, even reorients his body to get a good look, but it's not because he wants to watch the flight, but because he is genuinely not sure if the ball is going to fly out. In fact, once he determines that it is going out, he looks away and gets to work blaming the mound.

Alex White is still young. The longer he pitches in Coors Field, the more he'll be able to tell which of the fly balls he allows are home runs (all of them) and which aren't (none of them).

Tally:  It's hard to say whether he ultimately sees the ball land. He may have looked up after blaming the mound. Conservatively, though, three of four pitchers have watched.

Tally: At least four of the five pitchers have watched.

Tally: At least four of six pitchers have watched.

Ten of these was probably too many of these. I have nothing to say about this one. I quit doing bonus details four home runs ago. But I really want to get to Lance Lynn at no. 9, so onward we go.

Tally: At least five of seven pitchers have watched.

Kuroda, if I'm not mistaken, silently challenges Miguel Cabrera to a fight. He straightens up, faces Cabrera, and does the thing where he pushes his shoulders threateningly at his foe. The move I knew in middle school as the "what what?" This home run is so disorienting to Kuroda that he threatens Miguel Cabrera With A Bat to a fight. And our second angle shows he doesn't back down:

He just stands there, staring, like the pervert who watches you from the dark corner of your bedroom, probably.

Tally: Five or six of eight pitchers have watched.

As a Little Leaguer, I heard that throwing one's glove at the ball made it an automatic triple. So for a short period of time, when an obvious home run was hit, I would simply throw my glove straight up in the air. TRIPLE! Not a homer, a triple! But that didn't work. That was not a legal move, in baseball. And that's why you rarely see anybody other than Lance Lynn attempt that strategy in the majors.

Tally: Six or seven of nine pitchers have watched.

All home run distances via hittrackeronline, which also has video for each.

You need to be logged in to comment. Login or Subscribe
rawagman
So you're saying that people who don't like watching home runs feel that way because they have seen or felt the presence of a ghost? Fascinating results.
Reply to rawagman
lyricalkiller
ProGHOSTus
Reply to lyricalkiller
apbadogs
Livan Hernandez's was the best.
Reply to apbadogs
crotchfat
Livan Hernandez in general is the best. I want him to pitch into his 50's, go to the Hall of Fame, and have his bust say only three words. "Was the best."
Reply to crotchfat
doctawojo
355 career homers allowed: he's had plenty of practice at getting this right.
Reply to doctawojo
ahemmer
I think he did a charlie brown walk.
Reply to ahemmer
wendtm
Fantastic. He's the opposite of Alex White. That GIF is gonna be my fantasy team's logo next year.
Reply to wendtm
gilgamesh
Lance Lynn dropping his glove is the pitcher equivalent of puking a little bit in your mouth.
Reply to gilgamesh
RoyHobbs
Going waaaay back, I remember Troy Percival having a great reaction to giving up a long ball in his first season. His whole body seemed to recoil in shock, almost as if the urge to limbo beneath the blast struck him involuntarily.
Reply to RoyHobbs
hotstatrat
I don't like seeing too many videos going at once. I got as far as the third home run, then started feeling nauseated. So, I just skipped down here to say so.
Reply to hotstatrat
bertflex
Who else likes to watch long home runs? Arthur Rhodes. One of my favorite reactions to giving up a bomb. Video here: http://bit.ly/S79vsm
Reply to bertflex
jblapo
I loved the comments even more than the videos. Keep up the extremely funny stuff Sam!
Reply to jblapo
onegameref
Dunn crushed one in KC on Sat night and I failed to view the reaction of the pitcher. All I remember is Hawk and Stoney marveling at the sheer distance to dead center over three walls. I suspect it was one of the longer ones in the park other than during the HR Derby which doesn't really count. Dunn appears more like Hamilton. He doesn't seem to gloat or linger at home. I remember Ryne Sandberg always putting his head down and starting to run to first whether or not he crushed one or not. Peavy had a reaction to the two HR's he surrendered to Alcides Escobar. Same pitch in the same location twice with the same result. Peavy could be seen cursing at himself loudly. Now that's what I want to see from my pitcher. He should care that he just gave up a dinger. Not be so nonchalant about it and call for the ball from the catcher or umpire. Get a little fired up once in a while.
Reply to onegameref