Everybody knows the inning ended after the third out. What this post presupposes is … maybe it didn't?

Umpire: Literally couldn't care less. Hang on. Let me try to care less.
Umpire: /juxtaposes stakes of baseball game with reality of world where 170 million live on a dollar a day in China alone.
Umpire: No. Same. That ball was fair by the way.
Umpire: I'm imagining a boat beyond the right field wall. A schooner.

First baseman Mark Reynolds: /just wandering around wondering how long it will take for somebody, anybody in the game of baseball to notice that he is totally blind.

Center fielder Adam Jones: /sneaks in from behind center-field wall
Adam Jones: I was here the whole time!
Adam Jones: But how many outs was that? Just want to make sure you know.
Adam Jones: /smells like cigarettes 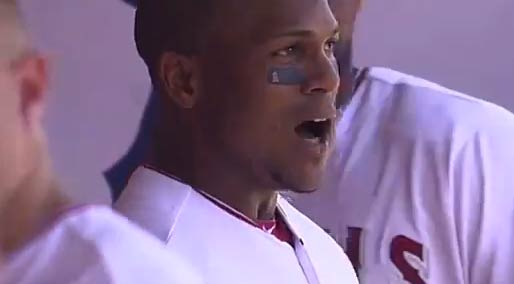 You need to be logged in to comment. Login or Subscribe
isthatbionicisit
See, this is funny. But when Starlin Castro forgets how many outs there are, he's the anti-christ.
Reply to isthatbionicisit
Oleoay
Two differences:

#2 There were no runners on base.

#3 Castro, in another incident, turning his back while the pitcher was pitching didn't help either. It's one thing if it's a once every year or two mistake, but Castro makes a mistake of some sort or another every month.

That's what I get for having an initial idea and getting more ideas mid-comment.

Though note, I kept writing till the ideas were over.

Starlin would've stopped at one idea.
Reply to Oleoay
robbtodd
Funniest thing I have ever read on BP. Great work.
Reply to robbtodd
randolph3030
Love the Tenenbaums reference.
Reply to randolph3030