What does Andrew Friedman do well? He finds low-cost talent, drafts productive players in the first round, and banks on strong run prevention to win games. Where does Friedman stumble? Generally when dealing with relatively big-money free agents. Wait, my computer keeps autocorrecting “Brian Sabean” to “Andrew Friedman.” What a weird glitch.

Any card-carrying baseball fan can name four or five of Sabean’s greatest follies. He employed Barry Bonds for 11 seasons and failed to win a title. When Sabean did win a World Series, he allowed sentimentalism to interfere with upgrading his team, thus hurting its chances of a repeat. He favors veterans over prospects and once admitted to signing (not very good) players in order to forfeit draft picks. Then there are the times he signed Barry Zito and Aaron Rowand to budget-busting deals that looked no better at the time than they do now.

Sabean kept his job through it all. If the Giants top the .500 mark this season, and it appears they will, then Sabean will notch his 12th winning season in 16 tries. Any general manager capable of producing a winner 75 percent of the time is doing something right. Sabean, as the case may be, does a few things right. One of which is netting high returns on small investments, as the Giants essay in Baseball Prospectus 2012 explained:

Brian Sabean finds free talent. Here’s the headline in the San Jose Mercury News on January 14, the day the Giants signed Ryan Vogelsong: “Giants extend non-roster invitations to 22 players for Spring Training.” Can’t you just feel the impact of the move in every letter of that announcement? Vogelsong was an All-Star for the Giants this year. The Andres Torres invitation in 2009 didn’t even get a headline, yet adding Torres turned out to be one of the best moves any GM has made in the past three years, producing 7.2 WARP for a few bucks more than the major-league minimum. Pat Burrell, picked up as a waiver claim, gave the Giants a 127 OPS+ in 560 plate appearances over two seasons. Santiago Casilla, signed for the minimum, has the third-best ERA in baseball in two years with the Giants. Even Huff, before becoming dead weight, was a spectacular success, found before 2010 for just $3 million.

This season is on track to add three more names to Sabean’s list of victories. Rob McQuown devised a query to find the most commonly paired outfield for each team. The Giants, represented by Melky Cabrera, Angel Pagan, and Gregor Blanco, had the highest total Wins Above Replacement Player in the league. Sabean is getting up-market production at down-market costs relative to the rest of the league: 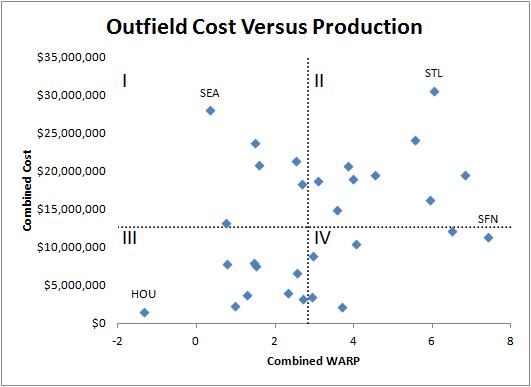 Those lines define the league median in dollars spent and WARP accumulated. They also help to form four quadrants, which break down like this:

Making the Giants’ feat in efficiency more impressive is the back story behind each of the players involved. None of the additions was exactly hailed at the time, and as a unit the Giants’ outfield looked like a liability, not a strength.

The closest thing Sabean pulled off to a blockbuster came when he traded Jonathan Sanchez and a minor-league pitcher for Cabrera. Those of you familiar with the financial sector may have heard teams like “fixed-for-fixed” or “fixed-for-floating swaps.” Trading Sanchez for Cabrera should be the definition of a “floating-for-floating swap.” Both are madly inconsistent players.

Cabrera, then coming off a banner season, seemed like a surefire regression candidate. The thought was, if regression to the mean didn’t trip Cabrera up, then his occasionally gadabout approach to conditioning would. So far, Cabrera has not only stayed upright, but hastened his pace. He ranks seventh in WARP a year after ranking 86th (amongst players with 100-plus plate appearances). While Cabrera continues to benefit from a higher than usual batting average on balls in play, his plate discipline has improved, as Ben Lindbergh noted.

The Pagan trade earned space on page two. Sabean traded Andres Torres (a startlingly similar player to Cabrera) and Ramon Ramirez for the right to see whether Pagan could relive his 2010 campaign. As it turns out, Pagan is producing a more faithful sequel than his 2011 season was. Pagan’s effort doesn’t stack up to the original when it comes to raw numbers. But that effect holds true for the league as a whole, too, and Pagan’s current campaign is the best context-adjusted offering of the trilogy.

Then there’s Blanco, who, if he was lucky, got a one-liner attached to a notes column. After falling through three organizations in a two-season span, Blanco signed a minor-league deal with the Giants. Blanco was always thought of as a reserve outfielder heavy on speed and on-base skills, but light in every other department. This season, 30 percent of his hits are going for extra bases, after 19 percent had caused serious damage in seasons past.

The likelihood of these three coming together like this were minimal back in April, and seem only slightly higher heading forward. How Sabean proceeds will be interesting to watch. During the offseason, he chose against re-signing Carlos Beltran, perhaps in part due to the money still owed Aaron Rowand’s way. It takes years of data before people will believe that one pitcher works out of jams better than another pitcher does. We’re at the point now where Sabean is a master at tiptoeing around self-placed landmines. Even when he does misstep, it feels like he can make up for it in another way.

You need to be logged in to comment. Login or Subscribe
lmarighi
Great read, R.J., thanks.
Reply to lmarighi
DrSeth
I wonder what this would have looked like if written before the season? Maybe one lists Huff in the OF with Blanco on the bench. Maybe Rowand's salary gets counted. Paints a totally different picture than where we are today. (LAA outfield would also be assigned higher $).
Reply to DrSeth
RJAnderson
Not nearly as glowing. But that applies to the idea of Vogelsong being in the rotation, Burrell starting in left field, and so on. It pays to be fortunate.
Reply to RJAnderson
Nickus
Can the Red Sox really be considered low-cost? I know this is just the most common pairings this year, but two of their projected starting outfielders (as opposed to players like Rowand who were released) are being paid a combined $29m and have only played seven games and accumulated -0.1 WARP. it would seem they definitely belong in quadrant I. Regardless, the Giants outfield has been surprisingly good, much as the Royals were last year.
Reply to Nickus