The Tigers are going through a bit of a bullpen crisis, and late Monday night, Detroit Newsâ€‹ columnist Lynn Henning took to Twitter to speculate that the team might have to make a 40-man move to bring in a fresh arm. According to Henning, the most likely guy to go looks like right-hander Thad Weber, who pitched four innings for the Tigers in April but has otherwise spent the last couple seasons allowing a whole lot of homers for Triple-A Toledo.

One possibility for Tigers minor-league DFA is Thad Weber, right-hander, 28, who might be least likely to match long-term needs and talents.

Here's the surprise twist: Thad Weber is on Twitter! And not only is he on Twitter, but he follows Lynn Henning. He probably wasn't pleased to see his name bandied about as a candidate to be cut, but rather than respond to the speculation, he chose to check Henning's facts.

To his credit, Henning owned up to the error. 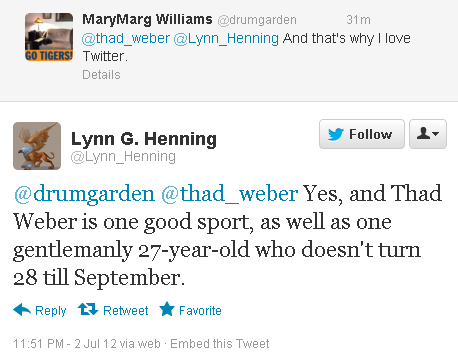 So, happy endings all around! Except for Thad Weber, who might be about to lose his roster spot.

You need to be logged in to comment. Login or Subscribe
lyricalkiller
Gosh this unfiltered has filled me with sorrow.
Reply to lyricalkiller
bornyank1
Imagine how Thad Weber feels. :(
Reply to bornyank1
bradleyankrom
Thrilled that he got his first mention on Baseball Prospectus?
Reply to bradleyankrom
doctawojo
I'm just keeping the run of little staff logos going is all. Ignore me.
Reply to doctawojo
aaronbailey52
And with a diving stop, OonBoon from out of nowhere! A devastating blow to the title hopes of the heavily favored Bourgeoisie Prospectans
Reply to aaronbailey52
bhalpern
We've certainly come a long way from MLB shutting down (trying or did? can't remember) C.J. Nitkowski's web site.
Reply to bhalpern
drawbb
What is this, FOUR posts and/or articles in the last 3-4 days that are nothing more than regurgitations of stuff posted on Twitter?

If I gave a damn about Nyjer Morgan wishing himself happy birthday, a prospect correcting his age by one year, a woman talking about life throwing you curveballs, or ANYTHING Buster Olney said then I'd have an account over there.

At least this post warned me it was about Twitter in the headline, and that's the only reason I clicked on it: To ask the editorial staff to flag all future Twitter summaries in the headline exactly as this post did so I know not to waste time clicking on any of them moving forward.

There's already one writer on this site whose articles I had to stop reading because they're never about anything other than himself and/or Twitter, but fortunately the byline lets me exercise freedom of choice. By a similar token, if recaps of Twitter-related garbage are going to start infecting this website like a cancer then I'd simply like to be warned so I can stay as far away as possible. Thank you!
Reply to drawbb
bornyank1
I'm sorry you don't enjoy the Twitter-inspired posts, but I don't think it's necessary to attach a special warning to them. This is the first complaint I've seen about Twitter-related content at BP. Like it or not, Twitter has become an important part of how fans follow baseball and interact with the people who play it and cover it. That makes it fair game for us. Just about every BP author is active on Twitter, and sometimes we see things there that we want to share. I wouldn't consider these posts about Twitter, per se. They're still posts about baseball. They just happen to contain tweets.

All I can tell you is that we're not getting rid of anything you do enjoy about the site to bring you more posts like this. We're still producing as many articles and detailed analyses as we ever have. We're just making an effort to be more active on Unfiltered, and Unfiltered is a place for quick items. If you stop reading Unfiltered, you'll stop seeing Twitter stuff. Of course, I think you'll also be missing out on a lot of good material.
Reply to bornyank1