On Tuesday night, Kip Wells started a big-league game for the first time since October 2009.  By starting for the Padres, Wells became the 13th San Diego pitcher to do so this season. Unsurprisingly, San Diego leads the league in starters used (by two), and could set history. Since the 1998 expansion, no team has used more than 17 starters in a single season. Three teams, however, have reached 17: the 2003 Reds, the 2004 Rangers, and the 2006 Royals. The Padres’ pace is blowing those three teams away: 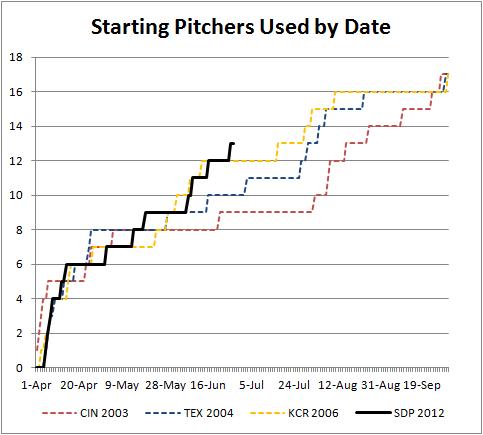 The Royals were the earliest to use a 14th starter (July 29), leaving the Padres with a month’s time between now and then to catch up. Even if San Diego enters August without using another starter, they still stand a chance of tying or breaking the record. Look no further than the Rangers, who used four new starters after August 1, or the Reds, who used eight. With the trade deadline upcoming and the potential thereafter for the Padres to try out some younger arms, like Casey Kelly, San Diego is in good position to at least tie the record.

You need to be logged in to comment. Login or Subscribe
NYYanks826
If Scott Kazmir ever had a chance to break back into the Major Leagues, San Diego is the team to do it with.