With a little over a month to go until the non-waiver trading deadline, talks between teams are heating up. In a seven-part series appearing over the coming week, several BP authors will be covering the needs, potential fits, and more for the contenders in each division, as well as a rundown of the top 10 player trade targets. Today, we take a look at the AL West. 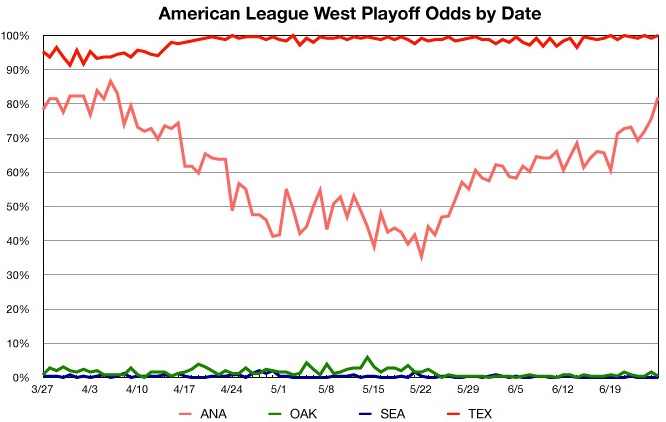 â€‹Payroll picture
Austerity is all the rage, everywhere but Anaheim. Arte Moreno and the Angels led the free world in spending this offseason, shelling out $386 million in multi-year contracts to sign Albert Pujols and C.J. Wilson and extend Erick Aybar and Howie Kendrick. Throw in last August’s $85 million extension for Jered Weaver, and the Halos have committed nearly half a billion dollars toward five long-term deals in the past 12 months.

With a club-record Opening Day payroll of $151 million and $88 million already committed to seven players for 2013, Jerry Dipoto might not be eager to spend more in July. In November, the Angels will have to decide whether to pick up eight-figure 2013 options on starters Ervin Santana and Dan Haren. But Dipoto does have some flexibility going forward. This marks the final season of the five-year contract for Torii Hunter, who is earning $18 million. And Vernon Wells ($21 million annually) comes off the books after the 2014 season. —Jeff Euston

General manager's track record
Small-sample-size warnings apply just as well to front-office staff as they do to players, so it's hard to be definitive about Jerry Dipoto's tendencies and foibles, skills and liabilities given that he was general manager of the Diamondbacks for less than three months in 2010 and is now approaching his eighth menisversary with the Angels. Dipoto's Arizona tenure did coincide with the trading deadline, but you don't typically see general managers fired in the midst of contending seasons, so Dipoto's job that July was to sell off Edwin Jackson, Dan Haren, and Chris Snyder for whatever he could get.

The most relevant move Dipoto has made is the acquisition of Ernesto Frieri earlier this year from the Padres. The Angels gave up little for the reliever: Alexi Amarista, a future utility man who Kevin Goldstein ranked 13th in the Angels system before this season, and Donn Roach, a starting pitcher who did not crack Goldstein's top 20, though Roach's recent performance (a 1.87 ERA in 91 1/3 innings, mostly in High-A) has raised his stock.

All of which gives some reason for Angels fans to hope that Dipoto may properly value his prospects and not be prone to giving up, say, Jean Segura for a marginal upgrade that does not justify the cost.

Biggest positional needs
There's an awful lot of green in the Angels row of our visual depth charts, with the weakest offensive position on the team being shortstop, where Erick Aybar has managed just a .237 True Average. PECOTA figures Aybar will pick that up to a .249 mark (which is also essentially his career average), though that still isn't a stick anyone would write home about.

On the pitching side, Ervin Santana has been quite bad, his 5.98 FRA resulting in nearly a full win below replacement. Garrett Richards has a gaudy ERA and good component stats this season (in 27 2/3 innings) to go with quality stuff, but his past performance warrants some skepticism.

Potential fits
Shortstops who can hit don't come along every day. Jed Lowrie would basically be an upgrade for any team right now, but the price could be exorbitant for a team with just the 23rd-best minor-league system per Kevin Goldstein's preseason rankings. The list of impending free-agent pitchers is longer than LaTroy Hawkins' resume, but some intriguing options jump out. The Pirates are bad bets to stay in the race forever, so Erik Bedard could be available. If Brandon McCarthy and Bartolo Colon get healthy, the A's might look to cash them in. The Angels could also take a run at winning the Matt Garza sweepstakes. —Jason Wojciechowski

Top trade chips
While it would be difficult for the Angels to pull off a blockbuster, especially with no big bats on the market right now, the system does have the depth to provide minor roster improvements. Scouts have been hot on the club's Double-A affiliate at Arkansas, with a focus on Dominican power righty Ariel Pena and super toolsy outfielder Travis Witherspoon. —Kevin Goldstein

â€‹Payroll picture
When it comes to the Rangers’ finances, one decision looms over all others: What to do with Josh Hamilton? The biggest cog in the formidable Texas lineup hits the free-agent market in a little more than four months, and preliminary talks about an extension have yet to produce a deal.

Texas made a nine-figure splash in January, bidding $51 million for the right to negotiate with Yu Darvish, who signed a $56 million contract. The Rangers started the season with a team-record $120 million payroll, and they already have spent serious money to make one notable mid-season acquisition, luring Roy Oswalt from his Mississippi home with a $5 million deal.

Jon Daniels has about $84 million committed to nine players for 2012, in additional to a long list of bigger decisions: Mike Napoli, Colby Lewis, Mike Adams, Yorvit Torrealba and Mark Lowe all are due to join Hamilton on the free agent market after the World Series. And the Rangers are gearing up for pricey arbitration cases with Neftali Feliz, Matt Harrison and David Murphy, among others. —Jeff Euston

General manager's track record
Jon Daniels has been in this game for years. There's no word on whether it's made him an animal, but he has been willing to be aggressive at the deadline to fill holes. He shored up his bullpen last year with Mike Adams and Koji Uehara, and has twice traded for impact Lees: Cliff in 2010 and Carlos in 2006. Of course, you cannot make impact trades without an impact farm system, and Daniels and his staff have created exactly that, as Kevin Goldstein has not ranked the system outside the organizational top 10 since 2007. This isn't to say, as Goldstein points out below, that Daniels will trade Mike Olt, but if a big, sexy trade is out there, remember that Daniels has pulled the trigger in the past.

Biggest positional needs
First base, as it seems it's been ever since the Mark Teixeira trade, is the weakest spot on the position-player side. Mitch Moreland has a .513 slugging percentage, but his mediocre OBP means he's still got just a .274 True Average, a performance that puts him just a skosh above the major-league average for first basemen. A true slugging (or perhaps out-avoiding) first baseman could help push the Rangers, who already have the second-best TAv in the American League, into untouchably elite territory.

A similar analysis applies to David Murphy's spot in left field. Murphy does have a .295 TAv, fueled by a career-high OBP (not counting his 112-PA 2007), but PECOTA sees his past performance and figures a .271 TAv going forward, which is basically league-average for left fielders. This is, again, not a weak position for the Rangers; it is rather a place where they could push aside a decent option if they were able to land a star.

The complicating factor here is that the acquisition of a star, assuming one is even available, could actually reduce some of the flexibility that makes the Rangers' depth and matchup possibilities so intriguing. Josh Hamilton gets quarter-days off in left field, Mike Napoli floats from designated hitter to first to catcher, Michael Young grittily and guttily sacrifices himself all over the field. Does grabbing a left-fielder who specializes in dongers and bombs outweigh the value Ron Washington squeezes from his roster flexibility? I have a truly marvelous demonstration of why it does not that this section is too narrow to contain.

Potential fits
Here's a shocker: there aren't a lot of bad teams with above-average corner sluggers they'd be happy to give up. Jonny Gomes and Carlos Lee could fit as lefty-mashers, though Lee's contract is prohibitively expensive. For what he provides, the Astros would have to make him available very cheaply. —Jason Wojciechowski

Top trade chips
The Rangers pitching stuff has suddenly been decimated by injuries, but with Roy Oswalt already added and the imminent return of Neftali Feliz and Alexi Ogando looming, there is little reason to believe they'll be in the market for pitching unless a true impact arm like Cole Hamels becomes available. That's the only way a player like third baseman Mike Olt would become available and as for Jurickson Profar, forget about it. Instead, the Rangers will likely make some small moves, with one of many intriguing lower level prospects being involved. Generating some buzz of late are right-hander Wilmer Font, and infielder Hanser Alberto. —Kevin Goldstein

You need to be logged in to comment. Login or Subscribe
wendtm
Basically, Texas is amazingly solid and deep, so much so that it's hard to come up with a major improvement. Though a true ace-level SP is always a big help in the playoffs.

Nice Fermat reference, Jason.
Reply to wendtm
doctawojo
Thanks!
Reply to doctawojo
asekoonce
I second the kudos on the Fermat reference. I am impressed by
the smart and learned (not the same thing, of course!) writers
on this site. Keep up the good work!
Reply to asekoonce