When the third out is recorded, the pitcher goes back to the bench, puts on a jacket (or wraps a towel around his throwing arm), and sits on the bench for the other half of the inning. When his teammates are retired, he slowly trots back to the mound and delivers a handful of warm-up pitches, and he’s ready to go.

In one of my previous columns, I noticed that pitchers throw their fastballs slowest when there is nobody out and the bases are empty—in most of the cases, that’s at the beginning of the inning. One of the questions that came to my mind was whether they are a bit rusty after spending some time doing nothing on the bench.

In this article, I will look at whether the pitchers’ performance is worse when facing the first batter after resting on the bench, and whether such a difference in performance would indicate that a change in behavior is required.

Let’s start with some numbers.

In the last couple of seasons, the average (linear weights) runs a pitcher allowed when facing the first batter of the inning has been 0.122. When facing hitters number two and three, it’s been 0.116.

The above numbers are relative to starters only, and first innings are removed for a couple of reasons:

Another note on the above numbers. You may wonder why I chose to compare the first batter of the inning with the second and third, rather than with all the batters coming to the plate in that inning. That’s to avoid a potential bias. In fact, if a pitcher faces a high number of batters in an inning, he is having a bad inning: in that case, the rest-of-the-inning bucket will be overrepresented and will likely contain poor pitcher performance at bats.

On the other hand, three batters is the guaranteed minimum that a pitcher will face (if not removed from the game) in an inning, no matter how he is doing.

You may also question why I decided to split data into first batter and second-and-third batters groups and not differently (first-and-second vs. third, or first vs. third…). That was completely arbitrary on my part, and I’m willing to listen for reasons to move the dividing line.

What was it like in the past?
We have not yet assessed whether the 0.006 difference (calculated with 2010-11 data) is something to care about, but first, let’s see how it compares to previous eras. (You know, because players in the past were tougher, worked harder, weren’t the millionaire sissies of today, etc.) 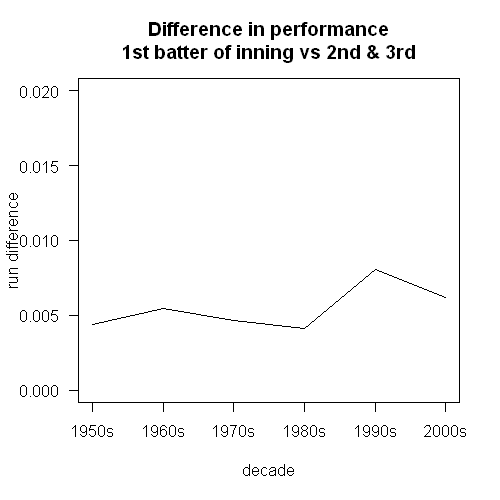 The difference in performance has historically been in the 0.004-0.008 range. Maybe the above line has a slight upward inclination, but it would be pretty hard to prove the existence of a trend. I would feel much safer saying that there has always been some small underperformance by a pitcher when facing the first opponent of the inning and would refrain from demonizing longer mid-inning pauses due to commercial breaks.

How long on the bench?
If the slightly worse performance at the beginning of every inning is due to rustiness from being idle on the bench, one would expect the effect to be magnified by longer between-innings pauses. When I noticed the speed issue a couple of columns ago, I found no correlation between reduced speed and length of stay on the bench (that is, how long a pitcher’s teammates kept batting.) However, since that was tangential to the article I was writing then, I did not apply any adjustment.

This time, I adjusted, as I have done several times in past articles, by the quality of the pitcher, the batter, and the ballpark effect. After removing the above factors from the equation, I looked at the difference in performance by time on the bench.

As one would expect, a longer pause means more rust for the pitcher.

A couple of notes:

What should we (or pitchers) do about all of this?
Are the numbers significant enough to suggest a change in behavior would make sense? Let’s do some back-of-the-envelope calculations.

A team needs 162 starts per season from its pitchers. Considering a five-plus-inning effort (and removing the first inning for the reasons stated before), that amounts to 810 first batters of the inning to be faced by starters. Plugging in a 0.005 value that we have seen to be historically reasonable, that would translate to four runs per season due to the pitcher not being at 100 percent capacity when a new inning starts.

Four runs is less than half a win, which is not a lot, but it’s not something to overlook, either—remember that book about teams looking for an extra 2%?

However, the way we have arrived at that four-runs-per-season value is a bit of a stretch, as I have multiplied numbers with a high degree of variability. That means that the variability also gets multiplied, so the four runs bring with them a high uncertainty.

There’s another problem. Let’s say that those four runs are for real. In that case, it could be worth it to devise a new between-innings routine: maybe the pitcher could be instructed to start warming up on the sidelines as soon as the second out is recorded by the opposite team.

Let’s say the new routine succeeds in removing the underperformance against the first batter of the new inning. Would the team really gain half a win for that? Or would the extra warm-up pitches be felt in the starter’s arm in later innings, thus reducing his in-game pitch limit? Having to go to the bullpen earlier is never a good sign of things to come.

So what’s the takeaway? The time spent sitting on the bench watching teammates batting does something to a pitcher’s stuff or mechanics, as he needs some time (one batter?) to get his speed back and to return to his usual level of performance. However, the effect is so small (and has such a high uncertainty) that no overhaul of solidified habits is advisable.

You need to be logged in to comment. Login or Subscribe
ScottBehson
AL/NL split due to batting and baserunning?
Reply to ScottBehson
Oleoay
Out of curiosity, do things look different if, instead of runs, something like batter OBP or pitches a batter faces?

Do pitchers that wait 20 minutes on the bench tend to let the first runner reach base more often? Do they tend to have a higher pitch count for that first batter or that first inning?

Another tangent.. Do pitchers who had to wait 20 minutes on the bench tend to get more injured?
Reply to Oleoay
markpadden
One likely explanation for this effect is individual game environmental effects. That is, higher than normal temp. and/or wind blowing out (relative to park avgs.) will lead to longer innings for both teams and poorer pitcher performance.
Reply to markpadden