With the emphasis being placed on injuries, it’s no wonder why some people are running around like Chicken Little screaming, “The sky is falling!” Headlines scream about injuries and range from “The Year of the Injury Plagues MLB” to “Baseball’s Biggest Stars are Hurting.” How hard and fast the sky is falling depends on the team you root for. If you live in New England, surely you have heard at least some fans making excuses about the Red Sox’ record because of the high number of DL moves. If you cheer for the White Sox or Marlins, injuries probably aren’t being brought up too much. So, who is right: those that say that the sky is falling, or those who shrug it off, understanding that Chicken Little is simply over exaggerating? I mean, could it really be that bad across Major League Baseball?

There has to be a reason though why 2012 seems like it’s been a bad year for injuries. In order to get an idea of what’s going on, I went back and looked at all DL moves between 2005 and now. I also looked at why players were placed on the DL for. What’s the injury that pops into your head when you hear a pitcher gets injured? Tommy John Surgery (TJS) is probably one of the top two, so let’s start our focus there. 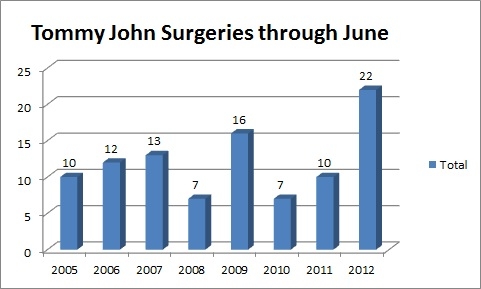 Clearly, TJS is up significantly this year and is probably the biggest contributing factor in our perception behind a rise in injuries this year. So far in 2012, there have been more Tommy John surgeries through June than any in any other year. Several other players—Felipe Paulino, Drew Hutchison, Kyle Drabek, Neftali Feliz, and Kyle McClellan to name a few—are either scheduled for TJS or rehabbing from a sprained ulnar collateral ligament. In fact, there have already been more surgeries in 2012 than any other full season; 2007 was the closest, with 21 surgeries for the entire year.

Right now, I don’t have a concrete explanation as to why 2012 became the year for Tommy John surgeries. There was no work stoppage during the offseason like in the NBA, and there wasn’t a particularly cold spring to cause the muscles to become more stiff and unable to withstand the forces of pitching. Tommy John isn’t getting any kickbacks for the surgery as far as I know.

One factor that likely plays a role though is velocity. High maximal pitch velocity has been linked with elbow injuries, and our Tommy John group from 2012 averaged over 94 mph on their fastballs. For comparison, the average across the majors has stayed a consistent 92 mph over the last several years. Now, it doesn’t sound like a huge difference, but remember that it includes all pitchers, even Jamie Moyer. In our TJS group, only George Sherrill averaged less than 90 mph.

Let’s look at the simple but big one, the overall number of DL additions through the end of June. 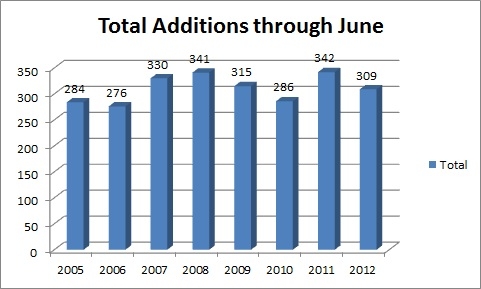 Despite the hysteria throughout the country, we can see in 2012 that there has not been an increase in the number of injuries across the board. In fact, unless we have 20 players ending up on the DL over the next week or so, it won’t even rank in the top three since 2005. The perception that the number of injuries is increasing at an alarming rate is simply not true. 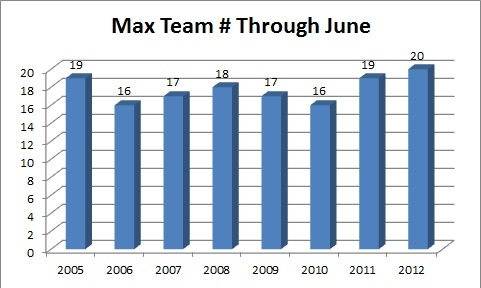 This “worst of the worst” graph represents the highest number of DL moves on a team in each year through the month of June. Other years have been close with 19 (Washington in 2005 and Los Angeles Dodgers in 2011) but the Boston Red Sox have the highest number in 2012. That stinks for the Red Sox—or karma, depending on how you look at it—but it could just be they are the ultimate outlier and skew the perception. To get a better idea, we need to get a bigger sample and look at the five worst teams (16 percent) for each year and see how the totals compare. 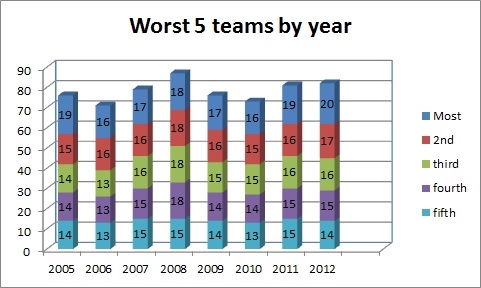 By using multiple teams, we can get a better idea if the injuries truly are getting worse across the league. When comparing the previous graph to this one, we see a different story. The 2007 and 2008 seasons now fare just as poorly, if not worse, than 2012, while 2011 still ranks just a hair below 2012. Digging a little deeper, by removing the worst team each year and focusing only on teams two through five, 2007 is now tied with 2012 with the same number of DL moves and 2009 is only a smidge behind.

So what about injury severity? Counting numbers alone don’t tell the whole story. Injury severity has to factor into the picture as well because injuries that require surgery usually have a greater impact on the team than calf strains, for example. There may actually be something to that. This next graph looks at the overall number of surgeries through June. 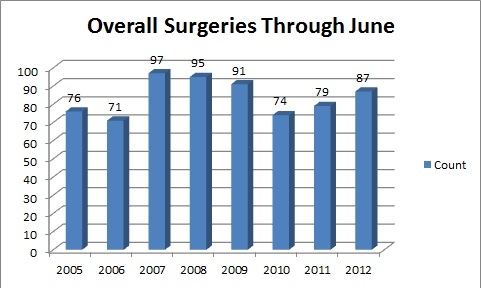 Even including TJS, 2012 does not live up to the hype; 2007 through 2009 were all worse than 2012 in terms of the overall number of surgeries. This list includes all surgeries, including Tommy Johns. Excluding Tommy John surgeries from the list, we see an even greater difference. 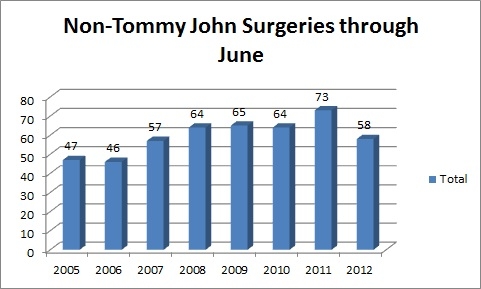 Finding out the root cause for the increase in Tommy John surgeries is difficult. We have mentioned that increased velocity is linked with elbow injuries, but there was no significant difference in our Tommy John group over the last three years. Strength and conditioning practices have not suddenly changed to cause the increase. Teams haven’t suddenly gone to a three-man rotation or allow players to throw 170 pitches.

More research needs to be done, but don’t be surprised to see a few more TJS throughout the rest of the year. At least we have some explanation for why it seems like injuries as a whole are up, even when the evidence points in the opposite direction.

Editor's note: The injury totals in this article are through Friday, June 22.

You need to be logged in to comment. Login or Subscribe
jj0501
Thanks for the breakdown. I suspected the TJS incidents were "up" but the rest of the story had escaped me.
Reply to jj0501
somerford
Actually, March was mild as far as temperature but April was Colder than normal, at least here in the Mid-Atlantic.
Reply to somerford
wyliecoyote
There are two sources of "sky is falling" that aren't really covered here:

#1 It sure seems like the injuries are concentrated in the stars and starters this year, as opposed to a bunch of AAAA guys having bad obliques, or whatever. I haven't researched it at all to see if this is true, but it'd be good to see totals in terms of projected WAR lost to the DL, or projected starters lost, or something, not just player counts.

#2 you looked at injury concentration at the team level, but it seems like they're being concentrated at the unit level more than usual: the entire boston OF and their replacements; most of the Toronto rotation; the cubs and angels catching corps. No idea if that's actually high, either, but when the backups are also getting hurt, that's when the sky starts looming over a lot of people.

I don't have the numbers right now but I think there is something to this. The list of names on the DL could put together a few different All-Star games. Kemp, Carpenter, Victor Martinez, Ryan Howard, Chase Utley, Crawford, Soria, Brian Wilson, and the list goes on and on.

This may have more to do with it than # 1. The Royals have several pitchers needing or had Tommy John surgery, Boston's OF and Toronto's rotation as you mentioned.
Reply to cidawkins
Drakos
I think that injuries grouped by unit has something to do with it. When the Padres roll out starting pitcher number 13 tomorrow I know I'll be thinking that they have the worst injury history ever even if it isn't true. The fact that their next two highest pitching prospects are also injured doesn't help matters when it comes to how I think about the situation.
Reply to Drakos
Chucko
I can't believe Ryan Howard makes your All-Star Injury Team but Ellsbury doesn't. It's bad enough that God hates the Red Sox, but this kind of snubbery (trademark pending) is just beyond the pale.

The addition of Crawford to your list helps, but since he still hasn't ever played an actual game of baseball in Fenway Park I don't consider him a Sox.
Reply to Chucko
cidawkins
If I listed everyone then you'd still be reading it. Ellsbury certainly belongs on there.
Reply to cidawkins
dwalters
Have there been more ACL tears this year than usual? I heard an announcer making that claim, and I'd be curious to know if there's any truth to that.
Reply to dwalters
cidawkins
Yes they are increased this year but it's not at a statistically significant level.