Entertain a hypothetical situation for a moment. Let’s say a gang of aliens invades and threatens to destroy the planet unless someone can make them feel five emotions by only talking about Matt Holliday, in which case they will return home. What would you tell them?

You could start simple and aim to impress them by reciting Holliday’s numbers. Holliday ranks ninth in career batting average among active players, as well as 15th in on-base percentage and 14th in slugging percentage. Then freeze them in empathy for San Diego by explaining the moment when an umpire incorrectly called Holliday safe at home. Warm them with laughter by recreating Holliday’s fumble in the postseason, and frighten them with Holliday’s pro-wrester-like musculature.

There is no shortage of choices for the final emotion, but here’s a tidbit that would shock their helmets off: No batter sees more inside fastballs than Holliday.

With your alien visitors out of the way, you’re free to figure out why pitchers go inside this often against Holliday. Ask around and you get a number of theories, mostly about the batter’s physical nature. Is he crowding the plate? Does he stand in a closed stance? Is his swing long or loopy in nature? Can he hit for power? Can he turn on an inside pitch? The simplest answer comes from Ryan Braun, who just missed being on the above table, and his manager:

"I don't think about it in any way," Braun said. "It's completely irrelevant. It does happen. All good hitters have to be pitched inside. It's something I've always said. It's a part of the game."

And there you have it … except those claims seem categorically false based on the data. For every good hitter, like Braun, Holliday, or Rodriguez, there is a Johnny Giavotella, Peter Bourjos, or Collin Cowgill in the top-20. Pitchers might aspire to take back the inside of the plate against the game’s best batters, but those dreams do not become a reality.  How then can we explain Holliday?

In an effort to figure out the mystery, I decided to consume as many of Holliday’s plate appearances as I could. But I did not want to know the results ahead of time, so I chose three games at random from each month. That gave me 42 plate appearances and 155 pitches to draw from.

Game One: April 6 versus Milwaukee

The first game on the Solve Matt Holliday Tour featured a good opposing pitcher in Yovani Gallardo. Naturally, Gallardo appeared uninterested in challenging Holliday in their first match-up. Gallardo worked on the outside of the plate and down in the zone against Holliday, eventually issuing a five-pitch walk. Holliday proved Gallardo’s earlier approach to be the correct one his second time up. Gallardo threw a first-pitch breaking ball that caught too much of the plate. Holliday did not barrel-up the pitch, but has enough strength to muscle the ball over the fence:

Gallardo, perhaps angered, took an aggressive approach against Holliday in their final meeting of the game. After missing inside with a fastball and seeing Holliday foul off a fastball over the plate, Gallardo went back inside with another heater. Holliday connected, but skied it into right field for an easy out. Gallardo exits before Holliday gets another chance, and we have to settle for southpaw Manny Parra instead. Parra fanned Holliday on four pitches. From there, Holliday faced side-winder Tim Dillard twice. Here is how those encounters played out:

The Cardinals’ home camera broadcasts feature an overhead center field camera; a useful tool for showing where Holliday stands in the batter’s box. You can scratch out the idea that Holliday crowds the plate. But keep that pen near because in its place we need to add Holliday’s high-step. After all, pitchers might see this as an easily exploitable timing mechanism:

When compared to the first game, this match is a letdown. Holliday clashed three times with Chris Volstad, grounding out twice and hitting a warning track fly out. The most exciting piece of Holliday’s day comes in his final plate appearance against Shawn Camp.

In The Last Boy, Jane Leavy writes about the time Claude Osteen faced Mickey Mantle. Osteen enters the at-bat knowing that Mantle’s weak spot is inside, but shares the trepidation he had leading up to and during the encounter. “If you’ve got a guy like Mantle who’s standing miles away from the plate, where there is so much daylight between the inside corner and his hands, it’s frightening.” But Osteen executed his plan nevertheless, “I went in there,” he tells. “It was a fastball, right on the black.”

How did Mantle respond? “Right away he went straight into the ball and closed that daylight up.” Mantle didn’t hit a home run, or cause any damage whatsoever; he hit a weak grounder to the shortstop. Think about Camp’s thought process as he prepares to throw a high-80s fastball inside to Holliday. Imagine what Camp expects as he watches this scene unfold:

Holliday allows the pitch to travel deep, seemingly too deep, before activating his hands. From there, the bat whipped through the zone, closing the daylight and making contact. Holliday didn’t square the pitch up, however; and Camp, like Osteen, lived to see another day.

Get used to the Cubs as Chicago popped up one more time before the end. The prize for more Cubs-Cardinals is three rounds of Jeff Samardzija against Holliday. Here is how Samardzija approached Holliday:

Two weak groundouts to second base and a strikeout meant a job well done for Samardzija and his approach, but that doesn’t tell the entire story. Check out where the Cubs positioned Darwin Barney and where he fielded the ball: 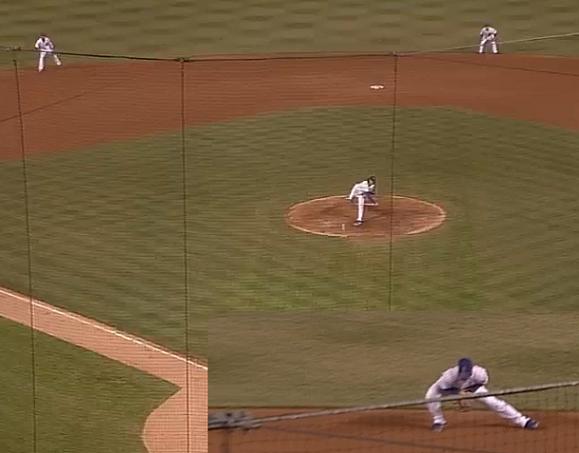 For spatial reference, note the netting support off to Darwin’s right. To write that he didn’t have to move is inaccurate—he did have to bend down. When genius fails, we ask why. When genius succeeds, we should ask why, too. Knowing what we know about Samardzija (i.e. he throws hard) and what we know about Holliday, it's curious, at least, that the Cubs would position Barney there.

Holliday would make amends for his poor at-bats against Carlos Marmol by smacking a home run. Marmol tried to throw a front-door slider, but the ball leaked over the plate and Holliday socked it. Left-hander James Russell would later go back to the Cubs’ formula of pitching Holliday inside, with three of his four pitches coming on the inner third or closer, and earned a strikeout for his efforts.

Game Four: May 4 versus Houston

Lucas Harrell doesn’t pitch for the Cubs, but he took their strategy as his own. Holliday grounded out on a fastball down and in his first time up. Harrell continued to pound Holiday inside by throwing five consecutive fastballs on the inner third. Pitch six of the battle was a fastball that caught the middle of the plate, Holliday torched it for a triple. Harrell kept to his game plan in their final match, though he yielded a single on a 2-1 breaking ball inside.

The best of the Astros bullpen struck out Holliday on six pitches his last two times up. Wilton Lopez used fastballs only while Brett Myers mixed in two breaking pitches.

Game Five: May 15 versus Chicago

It’s the Cubs, again. But it wasn’t an inside-fastball fest like in previous editions. Holliday faced just four inside fastballs over 17 pitches:

Game Six: May 21 versus San Diego

Clayton Richard faced Holliday four times and fell behind each time by trying to paint the outside corner. To Richard’s credit, he did seem to have the “pitch inside” memo later in the count, although he did allow a single. The other three plate appearances ended with two fly outs, and a groundout to second base.

Another southpaw, Jonathon Niese threw an inside fastball that Holliday grounded out to second base in their initial tango. Next time up, Holliday worked an eight-pitch at-bat, fouling off two inside fastballs (one high, one low) before singling on a breaking ball. Act 3 had Niese stay over the middle of the plate, but Holliday grounded out to the right side. Bobby Parnell followed Niese and walked Holliday. Frank Francisco then struck out Holliday on a bundle of fastballs.

Vin Mazzaro did a nice job of mixing his location early on. He came inside for strike one, then back out for three-straight before coming back in twice. Holliday would line out to center; he would ground out the next two times he faced Mazzaro. Aaron Crow coaxed a fly out on a two-strike high-and-tight heater.

Holliday’s double, a liner down on the left field line, looked like this: 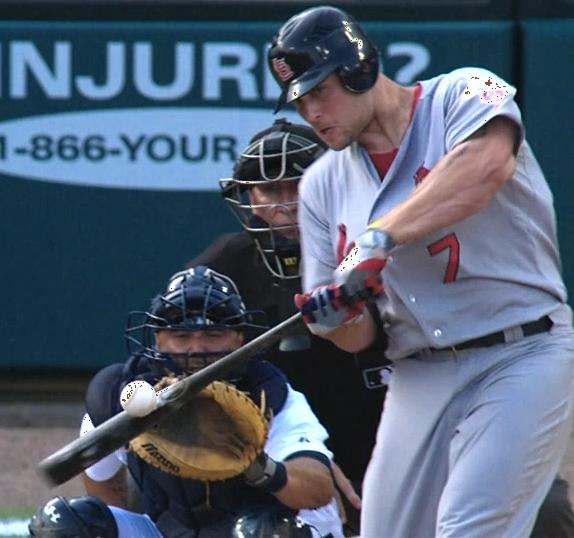 Watching those plate appearances revealed one thing: Holliday rarely burned the pitcher when pitched fastballs inside. Holliday saw 47 inside fastballs over the nine games. He took close to 40 percent of those pitches for balls, whiffed on about 8 percent, and fouled off around 25 percent. In other words, Holliday fouled the pitch off nearly half of the time he swung. The double off Verlander marked his lone extra-base hit on an inside fastball, and even then, he didn’t square the ball up.

Perhaps the above image is symbolic of what the rest of the league is thinking. The thought process seemingly goes like this. Holliday is a handsy hitter; therefore, pitching him inside is essentially testing the quality of his hands; therefore, if his hands decline, he can be beat inside; therefore, generating many weak groundballs; therefore, causing Holliday to cheat on fastballs, leaving him susceptible to soft stuff; therefore, making the reward worth the risk that Holliday does catch up to one.  There is the issue of a small sample size here, of course. Still, the league’s handling of Holliday suggests something is up. As do his overall numbers on inside fastballs, generated from PITCHf/x data via Joe Lefkowitz’s tool:

Cardinals fans should take solace in knowing that Holliday appears capable of terrorizing pitches over the middle and away. The other good news is that there is precedent for a late-career resurgence. Former Baseball Prospectus contributor Marc Normandin said that Holliday’s case reminds him of David Ortiz, who developed a hitch in his swing that made inside fastballs inaccessible. Even if Holliday’s hands are in decline, you would be hard-pressed to figure that out from his production, which remains in the league’s upper echelon.

You need to be logged in to comment. Login or Subscribe
LlarryA
Seems to me like there's a bit of a logic gap going on here. The first chart covers what percentage of fastballs are inside, but nowhere do we see an exploration of what percentage of total pitches are fastballs, much less inside ones.
Reply to LlarryA
SaberTJ
That would be a nice piece of additional data for the article.


Enjoyed the read though R.J.
Reply to SaberTJ
RJAnderson
Per the MLBAM classifications, Holliday is seeing 67.4 percent fastballs (that's four- and two-seamers, as well as cutters and sinkers, no splitters). That percentage is the 16th highest in the league, behind these fellows:

Sorry about that, I should've included it.

Reply to RJAnderson
RJAnderson
And to tie it all together a bit more: If 67.4 percent of Holliday's pitches seen are fastballs, and 68 percent of them are inside, then that means we're talking about 46 percent of his total pitches. That's not an insignificant amount.
Reply to RJAnderson
SaberTJ
R.J. Is there a way to check if this has been going on for multiple seasons? Is pitching Holiday inside something that has been going on for a while or is it a new trend for him this season.

Reply to SaberTJ
RJAnderson
There is, although I'd have to get one of the PITCHf/x gurus to pull the rates.