Ivan Nova leads the major leagues with 46 extra-base hits allowed. Many of them were mistakes. This one, a solo homer by Kirk Niewenhuis in the third inning of the Yankees-Mets game on Saturday, was not.

Nova would've liked that one back, of course, because of where it ended up. But you know how we always talk about putting process ahead of results-oriented analysis? That pitch's process was pretty sound.

There's a perception that home runs always come on hangers, that a batter can't really make a pitcher pay beyond a bloop or a bleeder unless he misses his spot and leaves a pitch over the middle of the plate. Nieuwenhuis' homer shows that's not the case.

In an article last month, R.J. Anderson quoted Greg Maddux as saying, "You know what makes you smart? Locate that fastball down and away. That's what makes you smart." Usually, it does. In fact, two pitches earlier in the at-bat, Nova threw Niewenhuis a nearly identical pitch, a 92-mph fastball on the outside corner. Niewenhuis took it for a strike. It looked like he had no other option.

Looks can be deceiving.

Nova did make one mistake: he fell behind in the count. Nieuwenhuis probably wouldn't have hit that pitch for a homer if it had come on 1-2 instead of 3-1. Still, Nova made the best possible 3-1 pitch, another 92-mph sinking fastball even lower in the zone, and Niewenhuis hit it out.

So, yes, some home runs do look like this one, Nieuwenhuis' first major-league homer back in April: 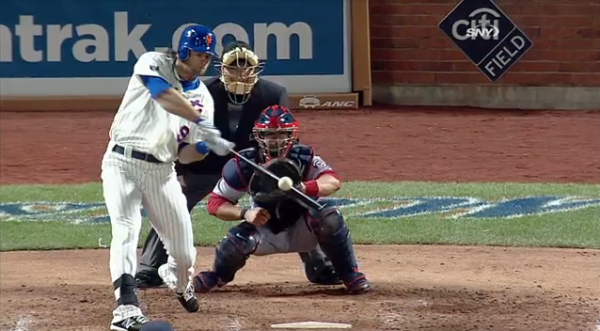 "Hanging breaking ball right here, and it stays flat," Keith Hernandez said. "Oh, that's just a hanger, and he turned right on it. That's belt high… that one did not break." 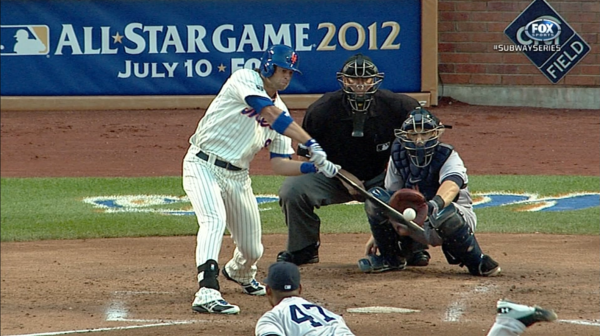 "This is a nasty, sinking fastball from Ivan Nova on a 3-1 count," Tim McCarver said. "Right on the black."

Home runs aren't always the result of bad pitching. Sometimes the pitcher picks a good spot and hits it, and the batter still makes him pay. Imagine how demoralizing that must be.

You need to be logged in to comment. Login or Subscribe
frampton
It's also true that not every hanging breaking ball (or nothing fastball, or change-up that gets left up in the zone) gets hit. I always thing of the strike-zone illustration in "The Science of Hitting" in which the fat part of the zone is never 1.000 -- pitchers *can* and *w2ill* get outs with bad pitches. So it only is fair that some good pitches get hit.

Reply to frampton
bornyank1
Absolutely. Good point.
Reply to bornyank1
bigbart
That's exactly what I was thinking. How many times do you say to yourself or a room full of friends, "he got away with one there." Or something to that effect, only way more colorful? That's why they play, why they are professionals, why they make it seem so easy, and so hard at the same time. After all, didn't Chris Davis strike out Adrian Gonzalez?

Reply to frampton
hyprvypr
Ask any pitcher who's faced Vladimir Guerrero. There's almost no BALL he can't crush, much less a strike.
Reply to hyprvypr
kdierman
Pretty good piece of hitting ...he let the ball 'get deep' in the zone and stayed behind it with his head. He started the butt of the bat toward the ball and created two nice levers with his hips and forearms.

Looks like Nova was toed on the 3rd base side of the rubber and his 2-seamer actually "cut" in about 2 inches toward the plate allow Niewenhuis to Barrel it up. The pitch he took had similar cutting action to work its way onto the corner but it was about 3 inches higher.
Reply to kdierman