Remember those "Turn Ahead the Clock" theme nights clubs did back in the late-1990s? It was an answer to the throwback craze that we're getting a taste of again these days. Instead of wearing classic uniforms from the club's past, the teams imagined what their uniforms might look like 30 years in the future, all the way to the year… 2027!

As The Score points out, it was a pretty great idea until corporations started sponsoring it and teams got lazy with the designs. It became boring and predictable. That was far from the case in Seattle in 1998, though, when the Mariners pioneered the event.

For their special night, the M's pulled out all the stops. An alien mascot was called in, the Kingdome was rebranded the Biodome, interplanetary-league posters were on the wall (including a game between Saturn and Mercury), the ball was delivered to the mound by a robot… the Mariners were not kidding around.

The most important part of the celebration—and the only reason I wanted to write about it—can be seen below. Driven out to the mound in a DeLorean (there's no record on whether it reached 88 miles-per-hour, let alone warp 7), the man who threw the first pitch this night was none other than James Doohan, also known as Commander Montgomery Scott or simply "Scotty". 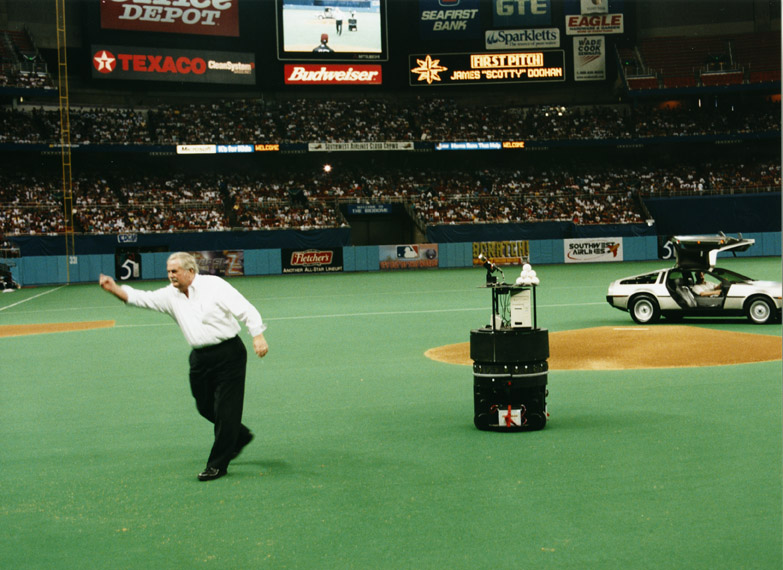 He did throw the pitch underhand, but I can forgive that. After all, Doohan lost the middle finger on his right hand during the invasion of Normandy on D-Day. If you watch his scenes in Star Trek closely, you'll notice that he goes out of his way to never clearly show his right hand. I can only guess that the missing finger had a lot to do with the 78-year-old Doohan foregoing the high heat.

Not that it matters. That's Scotty throwing out the first pitch at a major league baseball game! That should be all you need. It certainly is for me.

You need to be logged in to comment. Login or Subscribe
krissbeth
Very awesome bit of baseball arcana. Thanks for this!
Reply to krissbeth
morpheusq
Never knew that about Jimmy D--good article!
Reply to morpheusq