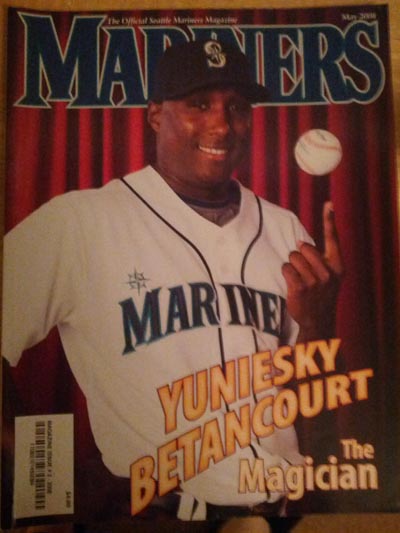 Oh, the in-stadium program. They're always the best.

Whether it's the full-size, monthly/quarterly magazine that used to be so prevalent around the league or the small-size, free-for-all, weekly programs that are gaining steam with clubs and advertisers, there's always something to look at in them. Scorecards, rosters, after-game deals at local pubs take up most of the space, of course, but they always lead off with some kind of attention grabbing article. It's not exactly fair to critique these articles, I know—they're essentially club propaganda masking as magazine filler and aren't exactly unbiased—but sometimes you just can't help yourself.

Take the May 2008 Mariners Magazine, found at merchandise stands all over Safeco Field four years ago. The cover story that month? "Yuniesky Betancourt: The Magician."

The feel of the article is readily apparent in the article's subtitle:

Every magician must master the sleight of hand tricks, those skills that show that hand is quicker than the eye. Shortstop Yuniesky Betancourt has mastered this well, making base hits up the middle disappear in the blink of an eye.

The article doesn't let up. In the first sentence, we learn that Betancourt "one day could take his place among baseball's elite shortstops, win Gold Gloves, steal 20 bases a year, be a perennial All-Star and even compete for a batting title." Lofty expectations.

And they weren't all from the article's author (who may not want to be named). Describing Betancourt's hitting, Seattle batting coach Jeff Pentland said "He's such an instinctive player, if you have him think too much you run into problems." We also learn that Yuni is "not big on video instruction" and "doesn't dwell on technical elements." Pentland also tells us that "walks are hard for him just because of his ability to make contact."

On the fielding side, third base coach Sam Perlozzo said "He's a Gold Glove waiting to happen. … If he hits a little, people will pay even more attention to his defense." That, of course, is due to the "peculiar history" of the Gold Glove, which has shown that it's "more of a popularity contest than one based purely on defense." According to the author, Yuni's glove "has translated well from Cuba … He has displayed outstanding range to either side, a powerful arm and fearless demeanor."

Other aspects of the Magician's game mentioned in the article are the flashiness of Cuban baseball (Yuni's roots), his basestealing ability (despite his 5 SB/4 CS ratio the year before or his career 17/15 ratio up to that point), and his tendency to swing at everything.

To be fair, many of the quotes from the Mariners' coaches are pretty clear bouts of optimism, the kind you get when someone asks "how good can this kid be if he figures everything out and everything goes right?" Yuni was only 26 years old at the time and entering his third full season, so some open-ended speculation was more than understandable. The coaches couch their answers quite often with language like "he has the capability" or "if he can cut down on his mistakes." They're pros. It's not their fault the author was tasked with writing something so buttery.

But this is Yuniesky Betancourt that we're talking about! Potential Gold Glove shortstop? Batting title contender? "…among the elite shortstops in baseball right now," as Seattle manager John McLaren said? This is almost like reading a scouting report for Nolan Ryan that says he needs to get more groundouts since he won't be able to strike anybody out, or one saying that Cal Ripken, Jr. is prone to injury. It's a bit difficult to get my brain around.

One thing I am certain about, though: I'm very glad to have run across this piece of history. An article praising Yuniesky Betancourt's defense might be rarer than even the Honus Wagner T-206 card!

You need to be logged in to comment. Login or Subscribe
cbrown1970
Who knew Dayton Moore was ghost writing articles for the Mariners game day program?
Reply to cbrown1970
Dodger300
I'll bet $10,000 that Rany Jazayerli didn't write that article.