Well, homegrown’s all right with me
Homegrown is the way it should be
Homegrown is a good thing
Plant that bell and let it ring.
-Neil Young, “Homegrown”

Take a look at the Reds’ lineup from last night: 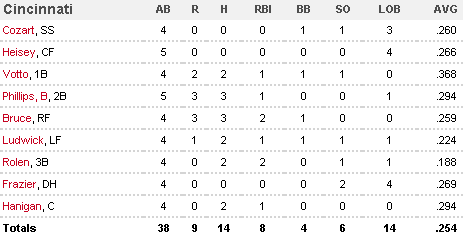 Notice anything? Actually, you might notice a few things. Scott Rolen isn’t on the disabled list. It’s not often you can say that. Brandon Phillips is the only player who gets to have his first initial in the box score, maybe so the parents of Zach Phillips, who pitched 2/3 of any inning for the Orioles in May, won’t wonder why their son switched positions and got traded without telling them. Ryan Hanigan is an underrated offensive catcher. Joey Votto really doesn’t make many outs. Cincinnati’s lineup as a whole had a heck of a night, as it has on a lot of nights lately (though on this one, it wasn’t enough—the Indians won 10-9.)

But I’m talking about who the batters were and where they came from, not what they did. Let’s look at the lineup another way:


Only three members of Cincinnati’s starting nine were imported from outside the organization. The other six were either drafted by the team or—in the case of Ryan Hanigan—went undrafted and were signed by the Reds as an amateur free agent. For a little contrast, here’s what last night’s Yankees lineup looked like: 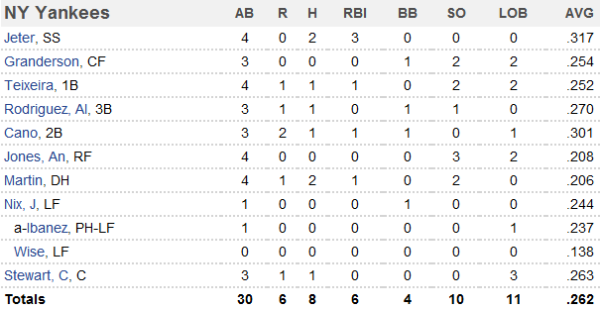 Only two of those players, Derek Jeter and Robinson Cano, have been Yankees for their whole careers. At times this season, Cincinnati has run out lineups containing only two players who weren’t career Reds.

Arbitrary endpoints alert: before last night, the Reds and Yankees were tied for the best record in baseball since April 19 (34-19). But they couldn’t have constructed their teams more differently.

On average, teams have given just under half of their plate appearances to homegrown players this season, defining “homegrown players” as those who haven’t played for another organization.* But last night’s lineup wasn’t an anomaly for Cincinnati: the Reds have gotten over two thirds of their plate appearances from players who’ve never worn another uniform, the highest percentage in baseball.

*No, it’s not a perfect method. For example, Reds outfielder Kristopher Negron counts as homegrown because he made his major-league debut with the Reds this season. Negron was drafted and signed by Boston in 2006 and traded to the Reds in 2009 after a few years in the Red Sox organization, so he isn’t homegrown in the usual sense. Then again, Negron has made five plate appearances in the majors, so his presence doesn’t move the needle much. This method works pretty well for our purposes.

Homegrown players aren’t necessarily better than the alternative—the Reds’ offense isn’t nearly as good as the Yankees’, despite a Votto-driven .293/.360/.486 collective line in June. However, they’re often a lot cheaper, since they don’t become eligible for arbitration for three years, or for free agency for six. That doesn’t matter so much for the Yankees, who can compete while absorbing the cost of decline-phase free agents. Despite the shackles of revenue sharing, luxury tax, and the new CBA, the Yankees are still playing by different rules than the rest of the league. Of course, they’d like their spending to be as efficient as possible, but for them, more so than any other team, payroll efficiency is a preference, not a necessity.

The Reds, on the other hand, play in one of baseball’s least-lucrative markets—the third-smallest by population, and the second-smallest according to the Nielsen Designated Market Area rankings. At $87.8 million, their Opening Day payroll was lower than that of any other current first-place team. (The Yankees, of course, were first, at a bloated $209.6 million.) For Cincinnati, keeping costs down is crucial. A Reds team that relies on the free-agent market to fill holes is a Reds team that would lose money, miss the playoffs, or both. The same goes for the Rays, who lead the majors by a wide margin in percentage of innings devoted to homegrown hurlers. (The Reds rank seventh in that category, with a well above-average rate.)

So how have the Reds succeeded? Good scouting, and some luck—whether a lot or a little, it’s hard to say.

We also went into greater depth about the steps the Reds have taken in recent years to keep a steady supply of talent flowing:

They’ve becoming increasingly active in the Latin-American market. Signing Chapman, the Cuban Missile, was the high-profile move, but their scouting of investments in Venezuela and the Dominican Republic in the last four years has been increasingly productive. The Reds are also among the industry’s leaders in scouting and acquiring European talent; that may not have borne out results yet, but it’s a new field that might eventually yield significant returns on their modest investments. They’ve also been considerably more aggressive yet unpredictable in the draft, proving willing to pay over slot (under the old CBA) while selecting a blend of ready-now and high-upside talent.

Those selections have paid off far more often than they did in decades before. In 15 first rounds following the selection of Barry Larkin in 1985, the best player the Reds drafted was Austin Kearns. Kearns wasn’t a bust, but he wasn’t exactly the picture of a successful first-round pick, let alone the best-case scenario for 15 of them. Then Terry Reynolds took over as scouting director in 2004 and switched to farm director two years later, ceding his former role to Chris Buckley, who’s held it ever since. Together, the two have presided over a much more productive period for Reds first-rounders:*

*As further evidence of their acumen, both have done interviews at BP.

Everyone has heard of all those guys, which is more than one can say for 2002 pick Chris Gruler, or 2000 pick David Espinosa, or 1999 pick Ty Howington, none of whom ever played in the majors. And it’s not just the first-rounders: in every draft since ’04, the Reds have snagged some complementary players (including some of those in last night’s lineup), skewing toward safer college picks but making exceptions for high-upside high schoolers.

I recently learned that most sharks don’t actually die if they stop moving, which was something I used to believe about sharks. I still believe it about the Reds (and the Rays). The benefit of being homegrown is the ability to economize. If the flow of Cincinnati’s homegrown talent slows, even for a season or two, it could upset the delicate balance the Reds have maintained while constructing a contender. Eventually, even homegrown players get expensive, and in order to lock them up long term, a small-market team has to cut costs in other areas. The Reds are already on the hook for hundreds of millions for Votto, and while they have more TV revenue in their future, it won’t be as much as bigger-market clubs can expect or have already received. Maybe their recent draft record is mostly skill, not luck, and they’ll be able to replicate it over the next several seasons. But it takes time before we know the extent to which past draft performance is indicative of future draft success, if we ever do.

Regardless of the reason, the Reds are still waiting for their best-selling book. But if our Playoff Odds are any indication, they’re about to lock up their second division title in three seasons. A few more of those, and the accolades will follow. They just need to keep doing what they’ve already done. Too bad what they’ve already done is so difficult.

You need to be logged in to comment. Login or Subscribe
maphal
What is mildly worrisome is the complete lack of talent/production at AAA Louisville right now.

Having traded Grandal, Alonso, and Boxberger for Latos, the Reds must have expected more from him than they've received so far.
Reply to maphal
reds1869
The best talent coming through the system is in the lower minors right now. It will get to Cincinnati when it is needed. AAA is weak because the Reds used AAA to beef up the major league club. It is a temporary problem.
Reply to reds1869
stevekantor
great neil young song, by the way. on the American Stars and Bars album, circa 1977. One of his last top shelf albums.
Reply to stevekantor
bornyank1
"Homegrown" is great. I think I'd put at least four of his albums after that above American Stars 'N Bars, though. That one was a little unfocused.
Reply to bornyank1
tullyhazell
I was trying to focus on Billy Hamilton as the next in the wave of Reds' homegrown talent, but I see only a blur.
Reply to tullyhazell
SaberTJ
Really good writing Ben. I enjoyed this a lot.
Reply to SaberTJ
bornyank1
Thank you, sir.
Reply to bornyank1
rawagman
Ben - regarding your table in the middle - do the percentages refer to players as homegrown only considering their MLB service time, or does it delve into which organization made the guy a professional?
In either event, good stuff here.
Reply to rawagman
bornyank1
Thanks. It only considers major-league service time--see my note about Kristopher Negron.
Reply to bornyank1
Alexander
Great article. I was just talking about this with a friend from my fantasy league--it seems like being home grown is paying off for a lot of teams, like the Mets and Nationals, too. Is there someplace where I can find a full list of homegrown percentages?
Reply to Alexander
bornyank1
Alexander, the spreadsheet is here. Those numbers are as of Monday. Two sheets, hitting and pitching.
Reply to bornyank1