In the eighth inning of Saturday's Yankees-Nationals game, Joe Girardi attempted to double switch. The goal was to replace pitcher Cory Wade with Boone Logan, shift DeWayne Wise from left to right field, and bench Andruw Jones in favor of Jayson Nix. But the Yankees, being an AL team, don't double switch often. All hell broke loose.

First, Wise, Jones, and Curtis Granderson couldn't decide which was the odd outfielder out.

Then Wise started walking off the field, only to discover he was going the wrong way.

Finally, a dejected Jones got the message.

Before there could be any further confusion, the Yankees beamed him back to the dugout. 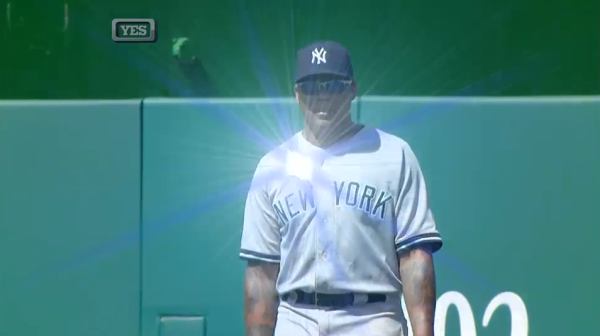 I thought about doing a fake dialogue for this, but I didn't have all day.

The chaos had a happy ending. Logan got out of the inning when Wise threw out Tyler Moore at the plate (though replays showed that Moore beat the tag). And six innings later, Nix led off with a single, stole second, and scored the winning run. See? Double switches aren't so scary.

You need to be logged in to comment. Login or Subscribe
lloydecole
Priceless. Thanks.
Reply to lloydecole
Wrigleyviller
This is still a more competent double switch than Dusty Baker usually pulls off...
Reply to Wrigleyviller