There was a brief period in my life when I was afraid to drive. I had had a near accident on I-5 when I, inexplicably, could not find the brake pedal and had to veer off the freeway at full speed. After that, I drove in dread of missing the pedal again. I tried to visualize myself braking, but even in the visions the nervous part of my brain took over and my visualized foot would just flail dumbly and unsuccessfully. This is what we call choking. A bit of nerves made me unable to perform a basic function. The level of stress it took to cause me to choke was: the threat of having to slow down a car. It did not take a lot of stress to cause me to choke.

We take it for granted that baseball players won’t choke, except in the extremely rare cases when they do. We are aware of those cases, and those cases make sports a little bit unpredictable and exciting, but mostly we take it for granted that they won’t choke. We take it so for granted that we have repurposed the word to describe merely failing in a big situation, which has nothing to do with choking. In a competition between two athletes, after all, one must fail. There’s nothing psychological about it. If you say Alex Rodriguez chokes in big situations, you mean he pops out. You don’t mean he forgets how to swing and holds the bat upside down.

Matt Cain, last night, pitched a perfect game. He didn’t choke, which is just as we expected, because we take it for granted. But he was nervous. Everybody was nervous. It was an exciting and wonderful thing to see, a baseball player visibly nervous. The most obvious instance of him being nervous came on a groundball up the middle that Cain tried to make a kicksave on. Except the ball is here: 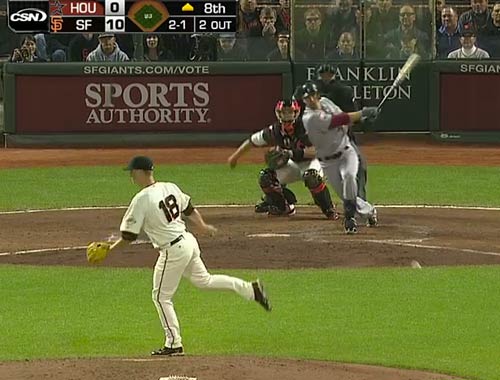 In that moment, he a) had totally forgotten where his shortstop was playing, or would ever be playing, b) made an attempt that, if successful, would have likely been counterproductive and c) vastly, vastly misjudged the distance between himself and the baseball. He was nervous!

Cain threw his perfect game because he had excellent command of his pitches, and even in the ninth inning he was able to hit his spots perfectly. Except for those instances when he held onto the ball way too long and missed his target by about three feet. There were actually quite a few of them in the last three innings: 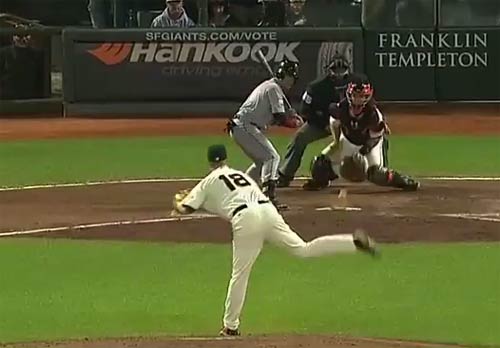 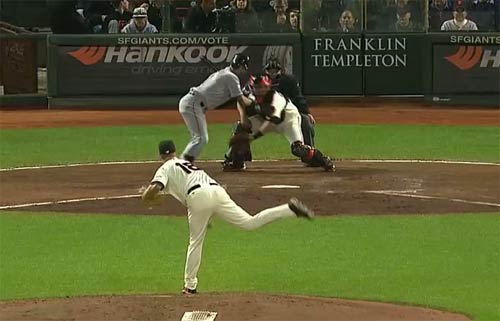 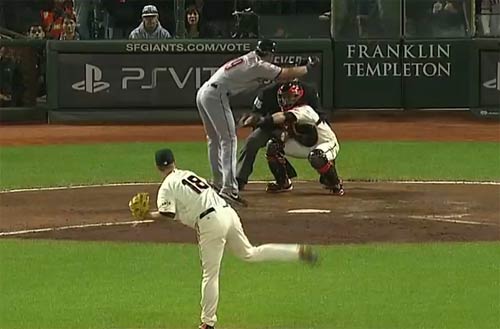 If Jed Lowrie had swung at the first one, he would have reached first base on an uncaught third strike. If Jordan Schafer and Brian Bogusevic had been a little less evasive, they would have reached first base on hit-by-pitches. In the final three innings, as the drama built, Cain was able to execute most of his pitches, but he was also hopping around the margin between a perfect pitch and the worst possible pitch. His average pitch got further and further from the center of the strike zone:

In the ninth, he started flinching on some of the Astros’ swings. Even his defenders looked just a bit less fluid: Cabrera rigidly lining up the second out of the ninth; Arias getting his feet just the slightest bit tangled while fielding the last out; Blanco holding the ball up just a split-second longer than you would expect, in the seventh. Everybody was so nervous!

“I thought I was going to throw up,” Brandon Belt said. “I was as nervous as I’ve ever been on a baseball field,” Buster Posey said. They were nervous: 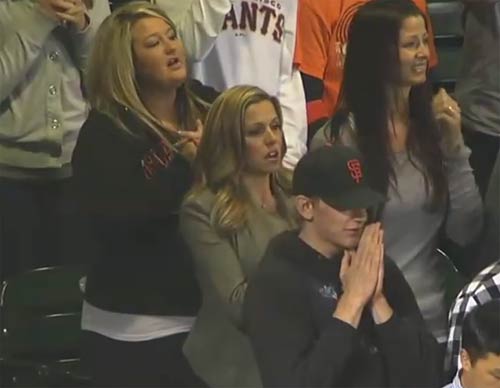 And these guys were nervous:

And even this guy was nervous: 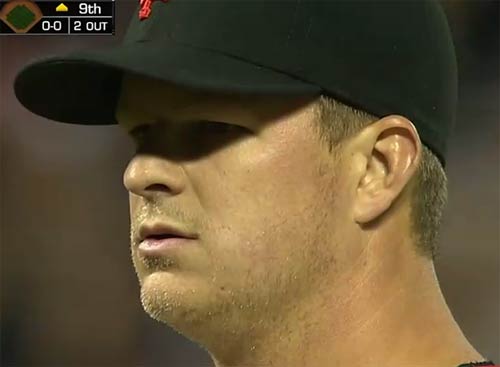 “I was having to recheck myself to see the signs that Buster was putting down,” Cain said. If I’m reading that right, he’s saying he was so nervous he couldn’t process a simple visual cue. A bit of nerves made him nearly unable to perform a basic function. There were thousands of people screaming at him. His margin for error was minimal. He had three-ball counts. His task required extreme precision, exact timing, and the perfect mixture of wet and dry on his fingers. Sure, pitching comes naturally to him, but he had to throw a strike in a three-ball count while experiencing an unnatural state of mind. We take it for granted that these players won’t choke, and we probably don’t make enough of that fact. Because, in a game like last night's, you realize just how nervous they really are.

You need to be logged in to comment. Login or Subscribe
mhmosher
Matt Cain is probably the least talked-about, underrecognized frontline starter in baseball. Glad for him.
Reply to mhmosher
juiced
Much better subject choice BP than "how do you feel about Cain's perfecto Dodger fans"? Who cares how they feel, if you're a baseball fan you give him a perfect 10 and are happy. 3.5 out, we're comin fellas, you better get Kemp back quickly. :)
Reply to juiced
surfdent48
Pitching a perfect game has to be the most difficult thing to do in all of sports, simply because, in addition to making good pitches, it requires an enormous amount of good luck.
Reply to surfdent48
gilgamesh
Really, the most pressing question from last night is who the hell is the ballplayer who belongs to the rather attractive tall, dark-haired WAG. The Giants' broadcast spent as much time on the wives' section as on Cain in the 9th inning; when she said "Oh my god" after the 2nd out in the 9th, I had a little glimpse of heaven.
Reply to gilgamesh
faztradamus
Ryan Vogelsong.
Reply to faztradamus
saberbythebay
She's on the Tweeter too! https://twitter.com/#!/nicolevogelsong
Reply to saberbythebay
TheRedsMan
Excellent article. As you point out, we definitely take for granted the reality that to become a professional athlete, one must be pretty good at handling pressure. But that doesn't mean they don't feel it. It's like the saying about courage, courage isn't the absence of fear, but rather the willingness to act in its presence.

Kudos to Matt Cain and his teammates for an awesome performance.
Reply to TheRedsMan
sacko83
clapping really is a ridiculous human behavior, but especially while having no rhythm, but ESPECIALLY while wearing a turtleneck sweater
Reply to sacko83
Chucko
So YOU were the guy on the 5 who was accelerating wildly and swerving all over that one time! Good to know I'll never have to deal with that again.
Reply to Chucko