It all sounds like the typical underdog story. Scott Diamond, a lefty, went undrafted out of college. He signed with the Braves and pitched in their system through the 2010 season, at which point Atlanta had to make a choice. Either the Braves could make a commitment to Diamond and place him on the 40-man roster, or they could leave him exposed to the Rule 5 draft and risk losing him for $50,000. The Braves took the risk and, in a way, it paid off. Not only did Atlanta receive the money from Minnesota, but when the Twins later wanted to demote the pitcher, the Braves negotiated for a strong-armed right-handed minor-league reliever in exchange for Diamond’s rights.

Items to check off the cliché list so far: “ignored by all teams in the draft”, “underappreciated by the organization that gave him a chance”, and “potential redemption with a new team that believes in him.” Diamond made his big-league debut for the Twins and struggled. He spent a lot of time in Triple-A, struggling there, too. Minnesota did not give up on Diamond and had few reservations about bringing him up this season. Diamond has since established a foothold on a rotation spot thanks to performances good enough and an alma mater small enough to make Brandon Beachy look overrated. No, really:

But Diamond isn’t Beachy; not in the physical sense, nor in the figurative sense. Sometimes, great numbers do not feel authentic. If you took a room full of people and made them watch a Diamond start without showing the in-play results or the score, then asked them to guess what his ERA is, almost nobody would write down a number lower than 4.00. Is part of that due to inherent biases? Yes, but Diamond just does not watch well. Take his over-the-top delivery, juxtaposed with two other pitchers known for their deception; Arizona’s Josh Collmenter (also over-the-top, albeit in a more extreme fashion) and Milwaukee’s Michael Fiers (more of a three-quarters release point):

Diamond’s delivery betrays him. His stuff is not as interesting as his mechanics, leaving eyeballs focused on his torso movement rather than the baseball. Plus, unconventional deliveries always make you ask, “Why?” Submariners are made, not born. For all anyone knows, Diamond picked up a baseball in his youth, threw it over-the-top, and had it feel right and never looked back. But he does not and will not receive the benefit of the doubt. The idea is that pitchers with odd deliveries are hiding something, but major-league hitters are some of the world’s best detectives. The hitters will sniff out whatever a pitcher tries hiding—bad velocity, poor stuff, iffy location—and they will do it quickly.

What blemish is Diamond hiding? Iffy stuff and the absence of an out pitch. Diamond is a left-hander with okay velocity (he sits in the upper-80s) who tosses a curveball and changeup in support. He throws strikes and gets groundballs, and does so without signs of fear or diffidence. If you ever need to describe Diamond’s skill set to a caveman who only understands the symbolic relations between images then you can take this montage pieced together by Sam Miller: 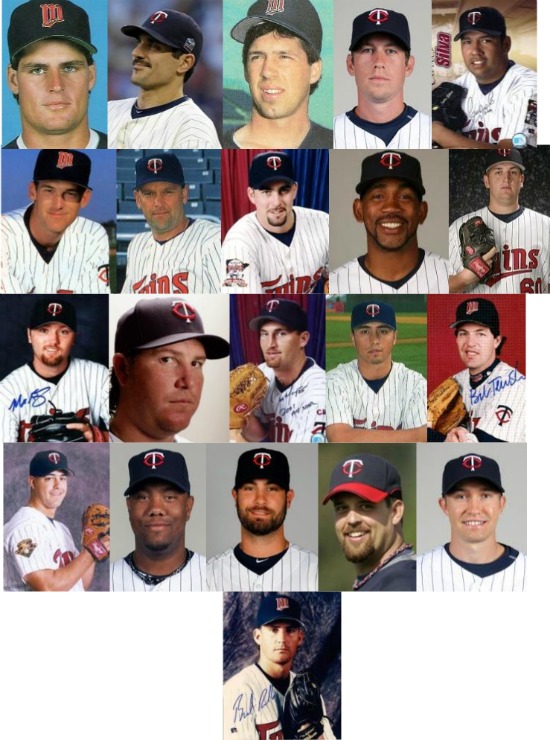 And this image of Diamond:

And your hairy friend will grunt knowingly: Diamond is a typical Twins pitcher. Take Miller’s brilliant description of what that entails:

He’s got a strikeout rate a tick below six per nine innings. (Even the movie Twins has 5.9 stars on IMDB.) He survives this limitation either by walking nobody—no–body—or by keeping the ball on the ground, but either way he’s not looking to coax a strike three out of anybody, and he’s not all that concerned about allowing a home run as long as there is nobody on base. He’s a veteran, and if he’s not a veteran, he’s just a future veteran in early but advanced development. He might be a lefty, but you don’t really think of him as a lefty. He’s a No. 4 starter with aspirations of being a No. 2.5 starter. He’s draftable only in the geekiest fantasy leagues. He once threw a ball 91 mph, but it was at one of those county-fair game booths and nobody believes him, even though he has a certificate of achievement that the booth operator gave him.

Diamond’s present success is contingent on making the opposition beat him. So far, he is allowing 10 hits per nine innings pitched. That formula only works if Diamond avoids walks and multi-run home runs. If you dig deeper into Diamond’s strike rate (about 64 percent) and do a comparative analysis that involves pitchers with similar strike rates (the 29 others in the 64-65 percent range) you’ll find that the next lowest walk rate is Mark Buerhle at 3.7 percent. Diamond’s walk rate is either going to increase naturally, or become a giant outlier. Should the more likely outcome occur and Diamond’s hit rate stay high, the floodgates are going to open.

At that point, there is a legitimate chance Diamond flushes out of the majors, or at least out of the rotation. It’s not a storybook ending to an underdog tale, but then, what is an underdog tale without the probability of failure?

You need to be logged in to comment. Login or Subscribe
bobbygrace
"Diamondâ€™s walk rate is either going to increase naturally, or become a giant outlier. Should the more likely outcome occur and Diamondâ€™s hit rate stay high, the floodgates are going to open."

Correct me if I'm wrong, but if Diamond's walk rate this year had been double what it has been so far, his WHIP would be 1.27 instead of 1.19. This year, that would mean he'd be more comparable at this point to Jeremy Hellickson, Henderson Alvarez, Brandon McCarthy, and Kevin Millwood. Those comps aren't that far off, to judge by K rate, and that company isn't too bad. "Floodgates" seems a bit much, don't you think?

Reply to bobbygrace
thegeneral13
I understand your mathematical point, but if he maintains a 1.27 WHIP over a statistically meaningful sample size I'll not only eat my hat but the hats of every BP subscriber. The hit and walk rates will both go up. Those would be dreamland comps for him.
Reply to thegeneral13
bhalpern
Please remove Sidney Ponson.
Reply to bhalpern
SaberTJ
I wonder if Diamonds mechanics lead him to a long stride that has his release point closer to the plate. If so, the added finishing velocity that would certainly help him.
Reply to SaberTJ