For a little bit Tuesday morning, we heard that Vladimir Guerrero was retired, but then we found out he was not retired. This is fitting, because when I watch Vladimir Guerrero swing I assume he is about to be retired (by the opposing pitcher) but he often turns out to be not retired (by the opposing pitcher). He swings at bad pitches and manages to hit them, is what I'm saying.

So he's not retired, but he asked to be—and was—released by the Blue Jays, which is to say he very well might be retired and he just doesn't know it. Maybe not, but he wasn't in demand three months ago, and he is exactly three months older today. Rather than write his official obituary, though, which is what I was planning during that little bit Tuesday morning, we can flip our perspective and admire these GIFs of Vladimir Guerrero as a teaser of what we are in store for if he does find another job. Or what we'll miss out on if he doesn't. I went through the PITCHf/x logs looking for: Vlad's worst swing of 2011, Vlad taking a called third strike, Vlad's worst swing on a 3-0 count and (going back three years) Vlad's worst swing that produced a hit. These are more or less the results.

1. Vladimir Guerrero swinging at a pitch. 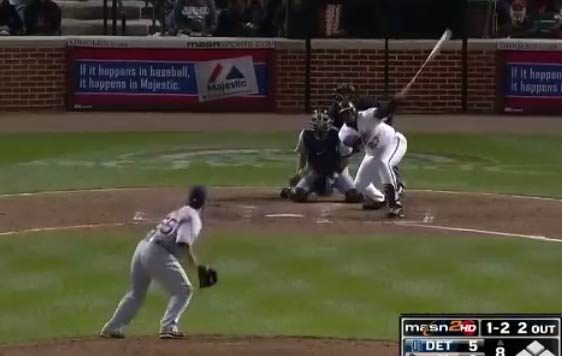 Vladimir Guerrero looks unusual playing baseball—the first time I remember seeing an Old Hoss Radbourn tweet was during the 2009 ALCS, and it was something to do with Guerrero running like a polio victim—but it isn't quite the motion that is funny. It is each individual still that is funny. He is a flip book of neo-expressionist portraits.

This, incidentally, is the pitch before that swing and miss: 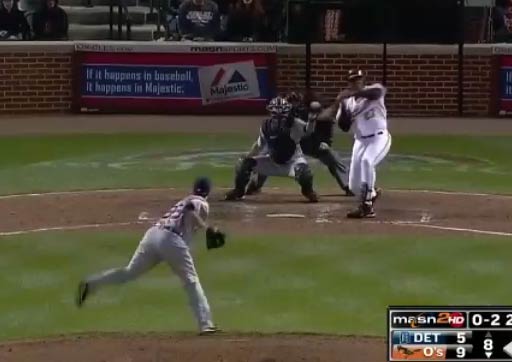 It was the exact opposite pitch. It was a ball, but it took an appeal to first to get him the call.

And this, incidentally, is the pitch that came two pitches earlier:

He took three called third strikes all of last year. One was a breaking ball that he got fooled on, one was a fastball that the umpire made just an awful call on, and this one. A few pitchers earlier, Robertson had thrown a slider and Vlad had swung well out of the strike zone for it. The pitch before, Robertson had thrown a slider and Vlad had taken it. Clearly, he thought this was going to be a slider, but it wasn't, and that was that.

Three parts about this, which are all clear in this frame: 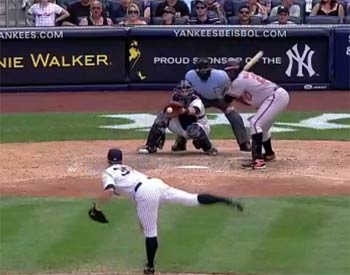 The pitch was not quite a strike. It was just a little bit off the plate, according to PITCHf/x, but Vlad's body language is completely resigned to being called out. Vladimir Guerrero doesn't argue called strikes, because every pitch he sees looks like it is in the strike zone. "Oh, that was definitely a strike," he probably told the umpire just before the strike was called. Also, even when he takes a pitch, Vlad's body gets into a strange, unathletic posture. He takes a pitch like he's in a pie-eating contest. And, finally, this takes place in front of a Johnnie Walker advertisement. I wonder how different the world would be if Vladimir Guerrero had somehow been nicknamed Johnnie Walker as a kid. Maybe he would have drawn walks! See?

3. Vladimir Guerrero swinging at a 3-0 pitch. 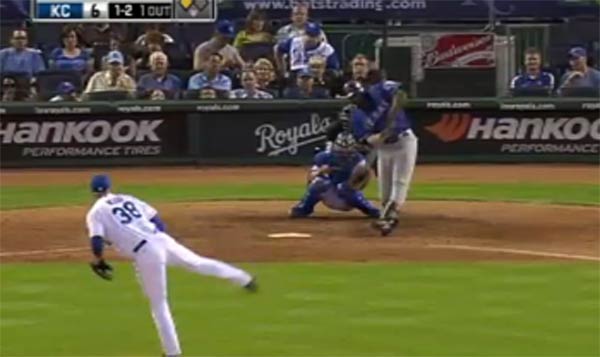 I mean, his leg. What is his leg doing? This is exactly the posture Vladimir Guerrero would be in if a car had driven down the first base line and, at this instant, plowed into him.

You need to be logged in to comment. Login or Subscribe
jivas21
Cool stuff, Sam. I have to say that, while I understand that older video would be limited, it's sad to see a retrospective with video of Old Vlad (Orioles, Rangers) rather then peak Expos Vlad.

And believe it or not, there's a semi-comparable player at his peak right now. The player that has swung at the highest percentage of pitches out of the strike zone in 2012? Josh Hamilton.
Reply to jivas21
bornyank1
It doesn't look nearly as weird when Hamilton does it, unfortunately.
Reply to bornyank1
GoTribe06
The laughter from "What is his leg doing?" brought tears to my eyes. Brilliant stuff.
Reply to GoTribe06
boards
This did it for me:

"He takes a pitch like he's in a pie-eating contest."
Reply to boards
jstnbsn
Didn't he hit a shin level pitch for a home run a few years back while on the Angels? Though that would be in here haha.
Reply to jstnbsn
morenobasspro
Vlad swings like the ball is a bee and he's Macaulay Culkin in My Girl.


As a longtime Angels fan, I can remember one time in Guerrero's tenure where I actually heard his voice. Even in commercials he just smiled and held a bat.
Reply to morenobasspro
sportspopery
As a teenager, I would drop whatever adolescent activities I had in store for the evening when the Mets went to play in Montreal. Watching Vlad in his prime attempt to tear down Stade Olympique line drive by wicked line drive was an absolute treat, especially considering that there was absolutely no good way to pitch to him.
Reply to sportspopery